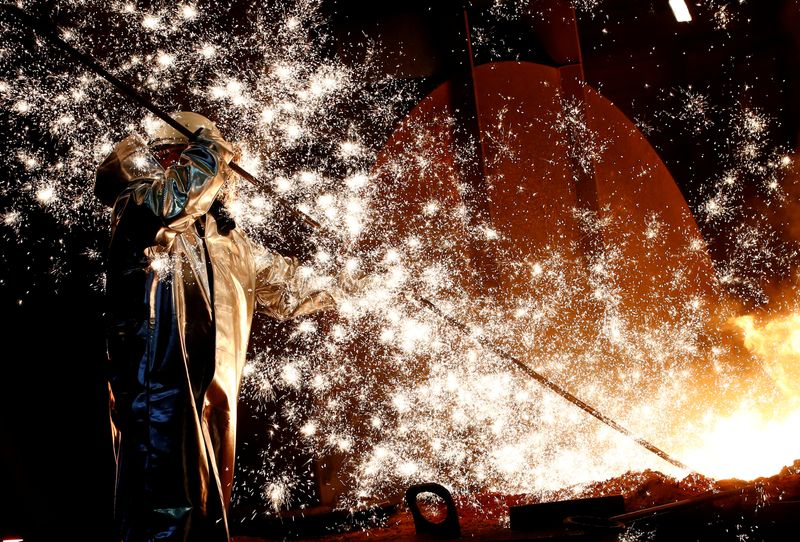 The bloc’s economy is on track for its first double-dip recession in nearly a decade as a second wave of the coronavirus sweeps across Europe, a Reuters poll suggested last week. But on Monday, Britain’s AstraZeneca (NASDAQ:) said its vaccine could be around 90% effective without any serious side effects.

Pfizer (NYSE:) and Moderna (NASDAQ:) have also developed apparently effective vaccines and Monday’s Purchasing Managers’ Index (PMI) showed optimism about the year ahead improving to its highest since before the pandemic hit the continent.

Still, IHS Markit’s headline flash composite PMI, seen as a good guide to economic health, fell to 45.1 in November from October’s 50.0 – the level separating growth from contraction. A Reuters poll had predicted a shallower dip to 46.1.

“The drop in the composite PMI to well below 50 adds to the evidence that the euro zone economy will post another sizeable contraction in Q4,” said Jack Allen-Reynolds at Capital Economics.

“But with vaccines looking increasingly likely to be rolled out in the first half of next year, the surveys show greater optimism about 2021.”

Vaccine hopes, and expectations of more stimulus from the European Central Bank next month, meant optimism improved. The composite future output index jumped to 60.1 from 56.5, its highest since February.

Shares and oil prices rose on Monday while the dollar softened.

FACTORIES TO THE RESCUE

Services activity in Germany, Europe’s largest economy, contracted faster this month after lockdown measures were introduced while in France the economy shrank at the fastest pace since May, sister surveys showed.

In Britain, which is outside the euro zone and European Union and has suffered the highest COVID-19 death toll in Europe, a new wave of coronavirus restrictions hammered the huge services sector.

A PMI covering the euro zone’s service industry fell to 41.3 from 46.9, its weakest reading since the height of the first wave of the pandemic and well below the 42.5 predicted in a Reuters poll.

With demand drying up despite price cuts and backlogs of work being run down, firms reduced headcount for a ninth month in succession. The services employment index fell to 48.1 from 48.5.

However, manufacturing has fared better as many factories have remained open. Its flash PMI held well above the breakeven mark at 53.6 in November, albeit below October’s 54.8. The Reuters poll had predicted 53.1.

An index measuring output, which feeds into the composite PMI, fell to 55.5 from 58.4. Demand also eased – the new orders index sank to 54.0 from 58.7 – indicating that the downward trend may continue.

“The good news is that the fall was cushioned by a strong manufacturing sector. Buoyed by Germany, the manufacturing PMI merely indicated a slowing of output growth, but not contraction,” said Bert Colijn at ING.

“Still, as the second part of the W-shape has just started, a long and uncertain road to recovery remains ahead.”