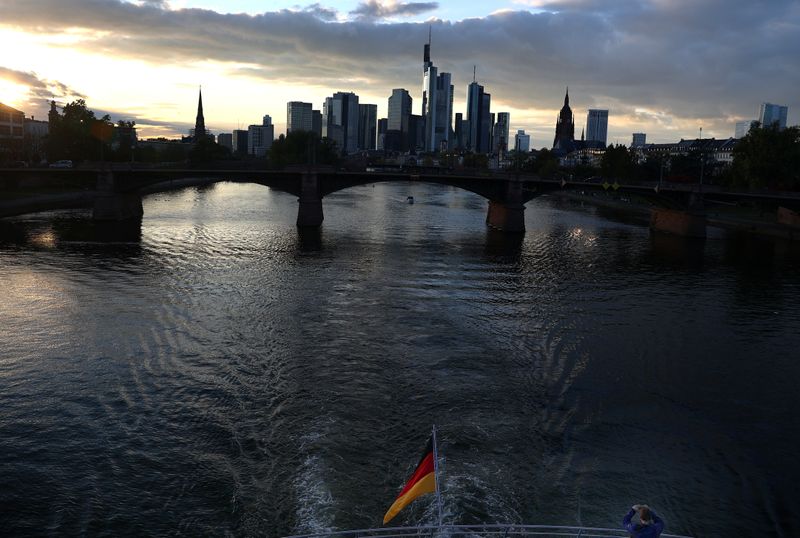 © Reuters. Outbreak of the coronavirus disease (COVID-19) near Frankfurt

LONDON (Reuters) – Euro zone economic activity slipped back into decline this month as a second wave of the coronavirus sweeps across the continent, heightening expectations for a double-dip recession, surveys showed on Friday.

Renewed restrictions to control the pandemic forced many businesses in the bloc’s dominant service industry to limit operations and nearly 90% of economists polled by Reuters this week said there was a high risk the coronavirus resurgence would halt the nascent euro zone economic recovery. [ECILT/EU]

“The euro zone PMI confirms that the second wave of the coronavirus is weighing more and more on the economy. A double-dip in the fourth quarter is becoming more likely at this rate,” said Bert Colijn at ING.

That was below the 50-mark separating growth from contraction and only fractionally better than the 49.3 predicted in a Reuters poll.

That headline PMI was dragged down by the service industry’s PMI, which sank more than expected to 46.2 from 48.0.

“The further decline in the euro zone Composite PMI in October adds to the evidence that the second wave of infections, and the new wave of containment measures, is taking a heavy toll on the economy,” said Jack Allen-Reynolds at Capital Economics.

Friday’s surveys showed the bloc’s economy is running at two speeds, with manufacturing benefiting from strong global demand and services struggling to remain active as lockdowns force consumers to stay home and businesses to close.

Echoing the divide between services and manufacturing, German factories powered ahead this month, while in France activity contracted as a resurgence of the virus hit the euro zone’s second-biggest economy.

Outside the currency bloc and now outside the European Union, Britain’s economic recovery also lost more momentum as restrictions hit businesses in the hospitality and transport sectors.

It will likely be a chilling winter for the job market which until now has been shielded by government furlough schemes as the uncertain outlook meant firms reduced headcount for an eighth month.

The composite employment subindex nudged up slightly, but remained in negative territory, while the Reuters poll concluded that the bloc’s jobless rate would not peak for at least six months.

With infection rates and the death toll rising, optimism fell. The services business expectations index dropped to 54.6 from 59.2, its lowest since May when the initial lockdowns were being eased.

A 750 billion euro stimulus plan agreed by the European Union in July to support its suffering economies will be delayed, a senior diplomat said on Thursday, which is also likely to have a negative impact on sentiment.

Still, factories fared much better than expected. The flash manufacturing PMI climbed to a 26-month high of 54.4 and was far above the median forecast in a Reuters poll.

An index measuring output, which feeds into the composite PMI, rose to its highest since early 2018.

Strong demand for manufactured goods meant factories were also able to increase their prices for the first time since mid-2019, albeit only slightly.

That will provide some relief to policymakers at the European Central Bank as inflation, which they want close to 2%, has been negative for two months.