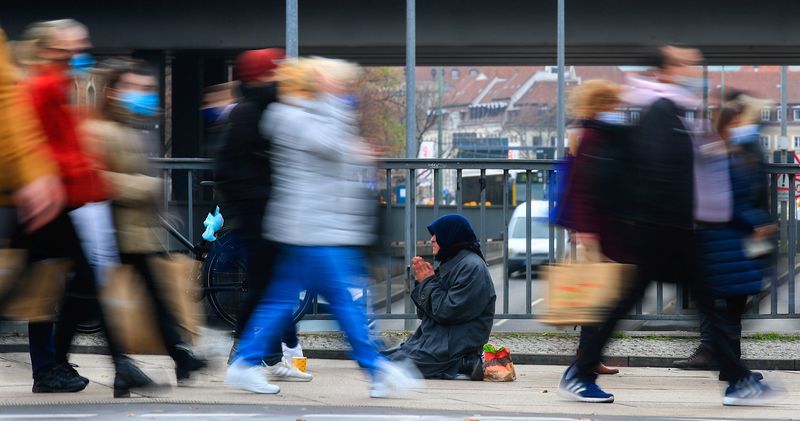 LONDON (Reuters) – Euro zone business growth was stronger than expected this month, a survey showed on Thursday, although prices rose at a record pace, likely adding to pressure on the European Central Bank to raise interest rates.

However, some of that expansion came from a rebound following the lifting of COVID restrictions and the outlook is murky as supply chain issues caused by the coronavirus pandemic have worsened following Russia’s invasion of Ukraine.

S&P Global (NYSE:)’s Flash Composite Purchasing Managers’ Index, seen as a good gauge of overall economic health, slipped to 54.5 in March from 55.5 in February although it was comfortably above the median 53.9 forecast in a Reuters poll.

Anything above 50 indicates growth.

“March’s euro zone PMI survey is consistent with our view that the economy will grow more slowly than most anticipate this year, while inflation will overshoot expectations,” said Jack Allen-Reynolds at Capital Economics.

“The survey also showed that supply problems worsened, which firms linked to the war in Ukraine as well as delays from China following the latest COVID outbreak there.”

But French business activity accelerated unexpectedly to an eight-month high as easier COVID restrictions boosted the service sector and eclipsed concerns about the Ukraine crisis’ impact on manufacturing.

In Britain, outside the common currency area, the private-sector services PMI hit its highest in nine months but manufacturing output was reported at its lowest in five months.

S&P Global said the reopening of the British economy after pandemic restrictions had helped offset the drag from the conflict in Ukraine, Brexit and rising prices.

Both the euro zone composite input and output prices indexes were at their highest in the survey’s history.

The output prices index jumped to 65.7 from 62.3 suggesting inflation, already a record 5.8% in February, has further to climb. The ECB would like it at 2%.

“Price pressure remains very high. Accordingly, consumers will have to expect prices to continue to rise in the coming months. This increases the pressure on the ECB to initiate a turnaround in monetary policy,” said Christoph Weil at Commerzbank (DE:).

Earlier this month the ECB said it would stop pumping money into financial markets this summer, paving the way for an increase in interest rates.

A PMI covering the bloc’s dominant service industry fell to 54.8 this month from 55.5 but was ahead of the Reuters poll estimate for 54.2.

Demand was resilient and with more pandemic-related restrictions eased firms increased headcount at a faster rate. The services employment index rose to 54.8 from 53.6.

While factory activity remained solid the pace of growth slowed to its weakest since January last year. The manufacturing PMI dropped to 57.0 from 58.2 but was ahead of expectations for 56.0.

An index measuring output, which feeds into the composite PMI, sank to 53.6 from 55.5.

High inflation and concerns over Russia’s invasion of Ukraine put a severe dent into optimism. The factory future output index plummeted to 53.8 from 68.5, its lowest reading since May 2020 – not long after the coronavirus pandemic began.