European governments will be issuing massive amounts of green bonds in the coming months as investors—including central banks—clamor for opportunities for sustainable investing.

The EU itself plans to sell €225 billion in green bonds over the next four years. The British chancellor of the exchequer, Rishi Sunak, last week announced plans for the first green gilts next year as he seeks to maintain London’s status as a leading financial center.

The UK will host the COP26 climate change conference next year in Glasgow, and making the City a hub for green finance is part of the chancellor’s plan.

France, Germany, Netherlands, Hungary, Poland, and Sweden are among the 16 countries that have already issued bonds dedicated to low-carbon infrastructure projects or other environmental, social and governance (ESG) goals. Italy says it will issue its first green bond later this year or early in the new year.

European sovereign green bond issues totaled the equivalent of $10.3 billion in the first nine months of the year, according to the Climate Bonds Initiative.

The resurgence of COVID-19 in Europe may be helping the green bond market, as it is a sobering reminder that countries need to invest in sustainability.

The EU is taking the “green” in green investments very seriously and has even drawn up a taxonomy of what makes an investment green in order to avoid the dreaded greenwashing among funds and other issuers seeking to curry favor with investors.

The Taxonomy Regulation, first proposed in 2018, came into effect in July. It does not directly address government bonds, but national governments tend to follow the EU criteria as they develop their own frameworks for green bonds.

The bond generally must fund climate change mitigation or adaptation, sustainable use of water and marine resources, promotion of a circular economy, prevention or control of pollution, or protection and restoration of biodiversity and ecosystems.

An initial issue has been liquidity. Germany, for instance, twins its green bond issue with a conventional bond having the same coupon and maturity. Its first green bond issue, €6.5 billion with a 10-year maturity, drew €33 billion in orders in August, allowing Berlin to shave a basis point off the yield of its twin (a savings that investors have dubbed the “greenium”). 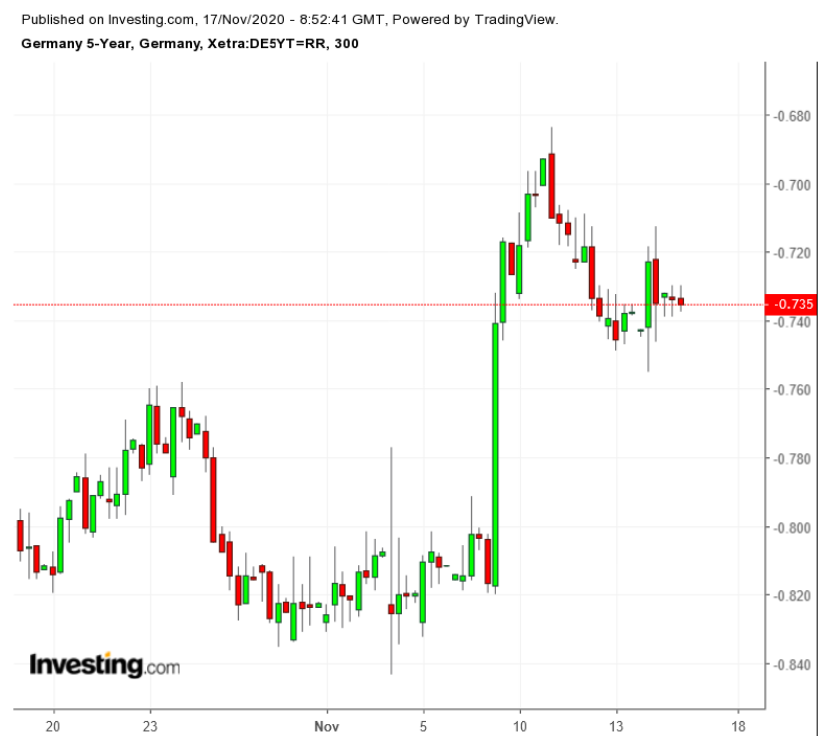 Germany came out with its second green bond of €5 billion earlier this month with exquisitely bad timing, launching it on Nov. 4, just as yields on its conventional bunds took a dive over the uncertain US election results. The Bobl, as the medium-term bonds are known, had a 0% coupon and was priced at just over 104 to yield minus 0.83% and barely eked out enough demand.

Investors also criticized Germany for raising new funds to pay for past spending instead of earmarking it for current or future projects. Berlin aims to establish a full yield curve for its green bonds and Sunak declared the same goal for the UK.

Denmark is innovating a green bond that allows a green certificate to be stripped out (essentially a zero-coupon, zero maturity bond), leaving a conventional bond while the government commits to spending that amount on ESG projects. It hopes to be a model for preserving liquidity for bonds of smaller countries with low levels of indebtedness (and a limited number of ESG projects).

France enjoys the distinction of having floated the biggest green bond issue so far, with its 22-year bond first issued with €7 billion in January 2017 and tapped successively since then to reach €27.4 billion by August of this year.

Whether the US government will issue green bonds under a new administration is another imponderable for the market, as US Treasuries, with outstanding debt now swollen to more than $20 trillion, constitute the biggest, most liquid government securities market.

If President-elect Joseph Biden rejoins the Paris agreement as he has promised and follows through on $2 trillion in green infrastructure spending, it could provide another fillip to Europe’s green bond market.