European stocks steady, but head for worst week since March By Reuters 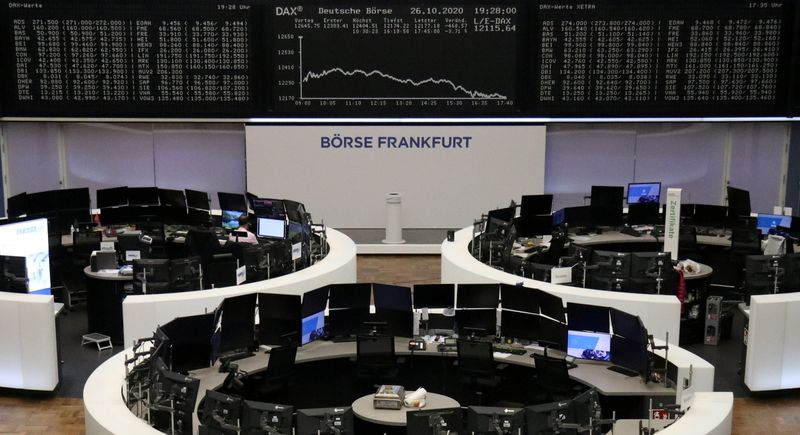 (Reuters) – European stocks inched up on Friday but were on track for their sharpest weekly decline since a brutal selloff in March, as a new round of coronavirus lockdowns dampened prospects for a sustained economic recovery.

The pan-European STOXX 600 index () inched up 0.1% after opening lower, set for a more than 6% weekly loss in what could be its worst such decline since an 18% plunge in mid-March.

Spain, one of Europe’s worst COVID-19 hot spots, will be under a state of emergency until early May.

Germany, France and other European countries have also reimposed tight restrictions in the recent weeks to curb the spread of the virus, pushing investors to look past data that showed a strong rebound in euro zone economies in the third-quarter.

“This week saw the return of fear, with equities selling off hard as the reality that surging virus cases and ever tightening restrictions in Europe will knock near-term economic prospects,” Barclays (LON:)’ European equity strategist Emmanuel Cau wrote in a note.

“While significant, we think the damage should be less this time around, with many businesses and, importantly, schools remaining open.”

Third-quarter earnings season has been largely supportive, with 74% of the nearly half the STOXX 600 companies that reported so far topping profit estimates, according to Refinitiv data.

French oil and gas producer Total (PA:) rose 2.4% after it maintained its dividend despite a sharp drop in third-quarter net profit.

But Air France-KLM (PA:) fell 3.3% after it unveiled a 1.05 billion-euro ($1.24 billion) quarterly operating loss and warned of worse to come as a resurgent coronavirus brings new travel curbs.

British Airways-owner IAG (L:) rose 0.9% after it said it was driving down its cost base to survive the deepening travel slump.