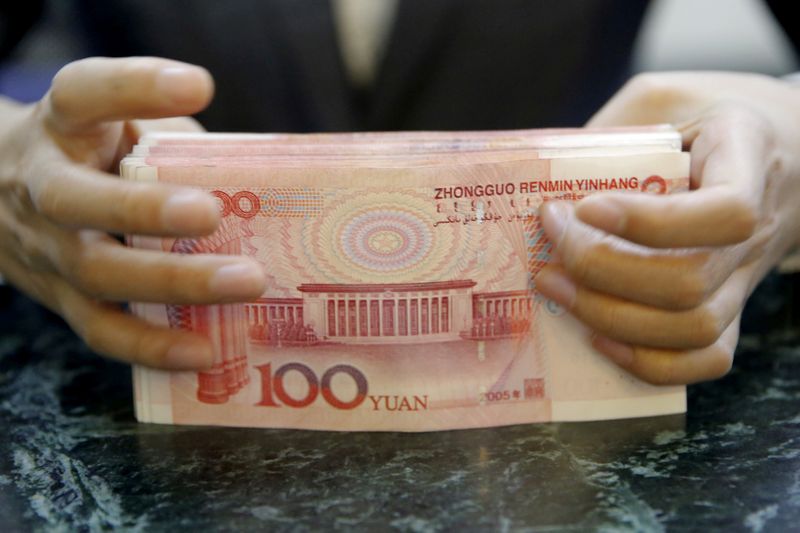 © Reuters. FILE PHOTO: A clerk of ICBC bank counts Chinese one hundred Yuan Banknotes as she poses for camera during a photo opportunity at its branch in Beijing

The Chinese currency has strengthened against the dollar over recent months as foreign capital inflows have sped up and economic fundamentals have improved. The

The People’s Bank of China (PBOC) has asked some of the 14 midpoint contributing banks to submit and adjust their models to better reflect flexibility in the exchange rate and let the currency become more market-driven, one of the sources said.

The counter-cyclical factor is the adjustment that contributing banks make to the daily trade-weighted reference rate that the PBOC uses to guide the yuan.

Some analysts said they were not surprised at the adjustment as the use of the counter-cyclical factor was meant to dampen depreciation pressure, and its effect has diminished recently due to recent yuan rallies.

“Given that there is no longer any depreciation concerns, it makes sense to do away with the counter-cyclical factor (CCF), and reducing the reserve requirement ratio as they have done a couple of weeks back,” said Khoon Goh, head of Asia research at ANZ, which is not a fixing contributor.

“This does not necessarily mean that they are seeking to actively weaken the yuan – it is just that those tools are no longer needed.”

Goh added that economic fundamentals were still in favour of the Chinese currency, and yield differentials between China and other major economies should continue to attract capital inflow to support the local currency.

The PBOC could not be immediately reached for comment outside of business hours.

The central bank lowered the reserve requirement ratio for financial institutions when conducting some foreign exchange forwards trading to zero earlier this month.

China first introduced the counter-cyclical factor in 2017 in what regulators said was an effort to better reflect market supply and demand, lessen possible “herd effects” in the market and help guide the market to focus more on macroeconomic fundamentals.

It has since adjusted its methodology a number of times to cope with market conditions and keep the currency stable.