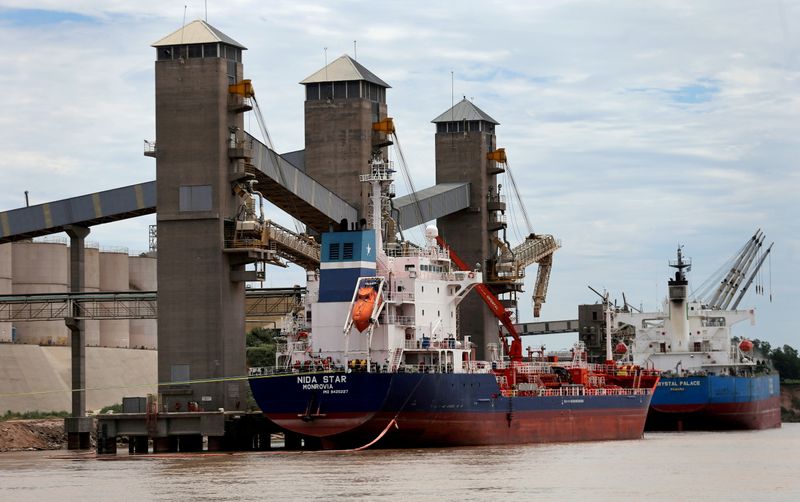 © Reuters. FILE PHOTO: Grain is loaded onto ships for export at a port on the Parana river near Rosario, Argentina, January 31, 2017. REUTERS/Marcos Brindicci/File Photo

By Hugh Bronstein and Maximilian Heath

BUENOS AIRES (Reuters) – Ships leaving the Argentine grains hub of Rosario on the Parana River are having to cut cargoes by 25% due to severely low water levels, the head of the local ports chamber said on Friday, with no relief in sight and the area expected to stay dry for months.

The Parana, which carries some 80% of Argentina’s farm exports, is at a 77-year low level amid prolonged dryness upriver in Brazil, which has impacted shipments of the country’s key exports, including soy, wheat and corn.

Dryness in neighboring Brazil, where the river originates, has reduced the amount of cargo that can be carried by ships at the height of the Argentine corn and soy export season, with questions mounting over the Parana’s ability to handle wheat export traffic late this year.

“Today ships are loading about 25% less than they do when the river is at normal levels,” Guillermo Wade, manager of Argentina’s Chamber of Port and Maritime Activities (CAPyM), told Reuters in an interview.

“If the situation does not reverse, and nothing suggests that it will, we will be losing 40% of what ships usually carry when water levels are normal,” he added, an unreported forecast underscoring the potential severity of the issue.

Argentina’s is a major corn and wheat exporter, as well as the world’s top supplier of soymeal livestock feed. The uncertainty about the Parana hits at a time of rising international food prices with U.S. corn and soybean prices boosted by drought in parts of the nation’s farm belt.

Argentina’s government is asking people to limit water use in a bid to alleviate pressure on the Parana. Grains exports are the country’s main source of foreign currency needed to refresh central bank reserves stained by a weak currency and long recession.

“We expect drier than normal conditions to persist for another three months across Southern Brazil. This would suggest that river levels will remain low or even drop lower in the months ahead,” said Isaac Hankes, a weather analyst at Refinitiv, the financial and risk business of Thomson Reuters (NYSE:).

The Buenos Aires Grains Exchange a 2021/22 Argentine wheat crop of 19 million tonnes and exports of 12 million tonnes. Harvesting is in December and January. It is an open question whether the river will be ready to handle the traffic.

A statement from Argentina’s National Weather Service called the impact of the crisis “multiple, widespread and costly.” It said the shallowness was caused by a prolonged drought in the upper part of the Parana Basin, in southern Brazil.

“We are suffering the effects of a drought that began in June 2019. It is a cycle that has not ended, and it is not clear when it will,” the service said in the statement.