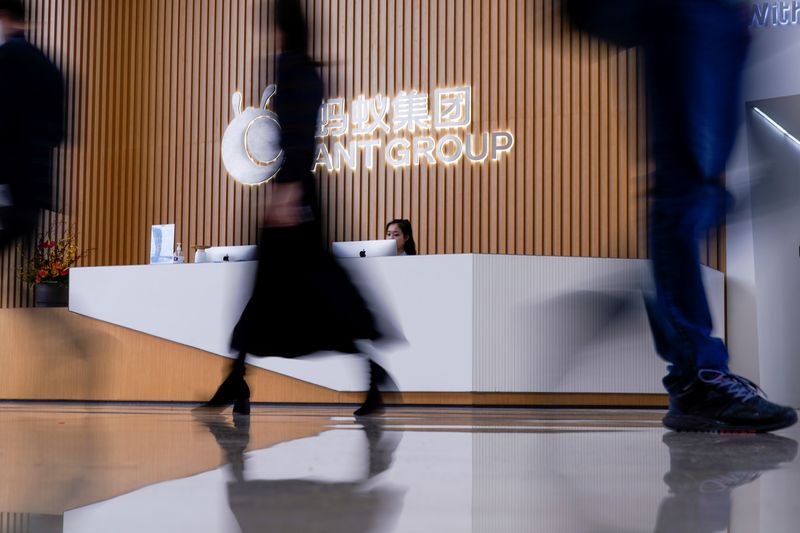 © Reuters. FILE PHOTO: A logo of Ant Group is pictured at the headquarters of the company, an affiliate of Alibaba, in Hangzhou

Reuters reported last month that the U.S. State Department had submitted a proposal to add Ant Group to a trade blacklist in order to deter U.S. investors from taking part in its initial public offering, which was expected to rake in a record $37 billion before being postponed on Tuesday.

But the Commerce Department, which oversees the blacklist, shelved the proposal after Alibaba Group Holding Inc (HK:) President Michael Evans urged Commerce Secretary Wilbur Ross to reject the bid in a phone call, the people said, declining to be named because they were not authorized to speak on the matter.

Three of the people said fears of antagonizing Wall Street ahead of Tuesday’s presidential elections and the possibility of a lawsuit helped convince Ross to set the plan aside.

“It could spur legal action or cause a chill in markets,” one of the sources said.

In contrast, the fourth person said Ross was taking into account the fact that Alibaba’s (N:) platform Taobao is already on the United States Trade Representative’s notorious markets list due to concerns it includes some counterfeit goods. That means it already faces U.S. government scrutiny, the person said, stressing that Ross’s decision was neither due to the phone call nor market, election or legal concerns.

Ant and the State Department declined to comment. Ross and Evans could not be reached for comment.

Inclusion on the trade blacklist, known as the entity list, forces a company’s U.S. suppliers to seek special licenses before selling to it. It does not, however, prevent U.S. investors from buying its shares, and its impact on a fintech giant like Ant would have likely been largely symbolic.

While Ant’s Alipay payment app is currently unavailable for American users, according to a company spokesperson, China hawks in the Trump administration fear it could access sensitive banking data belonging to future U.S. users.

Donald Trump’s administration has recently shown some reluctance to flex its muscle against Beijing before Tuesday’s election, in which polls show the Republican incumbent trailing Democratic rival Joe Biden by double digits nationally.

In September, Commerce softened a bid by the Defense Department to add China’s top chipmaker SMIC to the entity list, instead instructing the company’s U.S. suppliers to seek licenses before shipping it certain high tech items.

With the spread of the coronavirus, which originated in China last year, and Beijing’s crackdown on freedoms in Hong Kong, Trump had stepped up actions against Chinese companies like Bytedance, which owns social media app Tiktok, earlier this year.

But a move by the Trump administration to ban certain U.S. transactions with the Chinese owners of messaging app WeChat and TikTok has been held up in court.

Investors had largely shrugged off concerns over Ant Group, bidding for a record $3 trillion for its shares before China suspended the Ant Group’s stock market listing, in a dramatic move that left investors and bankers scrambling for answers.