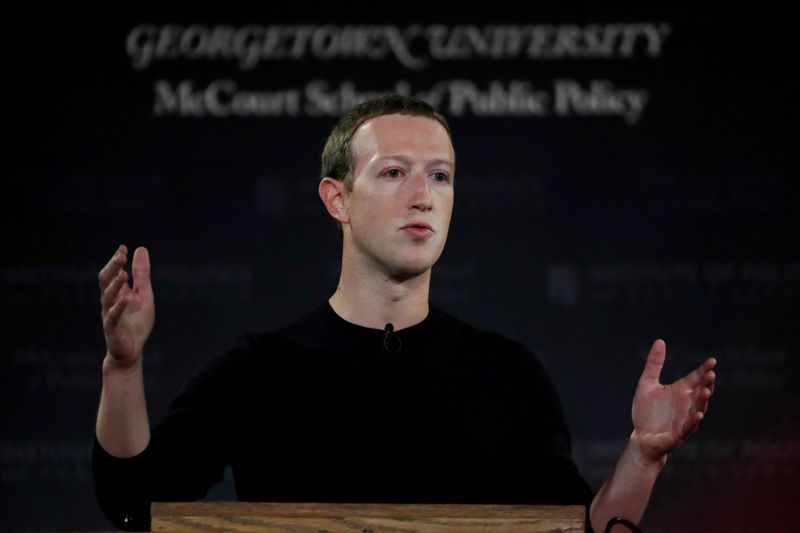 By Elizabeth Culliford and Sheila Dang

(Reuters) -Facebook Inc is now called Meta, the company said on Thursday, in a rebrand that focuses on building the “metaverse,” a shared virtual environment that it bets will be the successor to the mobile internet.

The name change comes as the world’s largest social media company battles criticisms from lawmakers and regulators over its market power, algorithmic decisions and the policing of abuses https://www.reuters.com/technology/facebook-knew-about-failed-police-abusive-content-globally-documents-2021-10-25/#:~:text=Oct%2025%20(Reuters)%20-%20Facebook,company%20documents%20viewed%20by%20Reuters on its services.

CEO Mark Zuckerberg, speaking at the company’s live-streamed virtual and augmented reality conference, said the new name reflected its work investing in the metaverse, rather than its namesake social media service, which will continue to be called Facebook (NASDAQ:).

The metaverse is a term coined in the dystopian novel “Snow Crash” three decades ago and now attracting buzz in Silicon Valley. It refers broadly to the idea of a shared virtual realm which can be accessed by people using different devices.

“Right now, our brand is so tightly linked to one product that it can’t possibly represent everything that we’re doing today, let alone in the future,” said Zuckerberg.

The company, which has invested heavily in augmented and virtual reality, said the change would bring together its different apps and technologies under one new brand. It said it would not change its corporate structure.

The tech giant, which reports about 2.9 billion monthly users, has faced increasing scrutiny in recent years from global lawmakers and regulators.

In the latest controversy, whistleblower and former Facebook employee Frances Haugen https://www.reuters.com/technology/facebook-sees-safety-cost-whistleblower-says-2021-10-25 leaked documents which she said showed the company chose profit over user safety. Haugen has in recent weeks testified before a U.S. Senate subcommittee and lawmakers in the UK’s Parliament. Zuckerberg earlier this week said the documents were being used to paint a “false picture.”

The company said in a blog post that it intends to start trading under the new stock ticker it has reserved, MVRS, on Dec. 1. On Thursday, it unveiled a new sign at its headquarters in Menlo Park, California, replacing its thumbs-up “Like” logo with a blue infinity shape.

Facebook said this week that its hardware division Facebook Reality Labs, which is responsible for AR and VR efforts, would become a separate reporting unit and that its investment in it would reduce this year’s total operating profit by about $10 billion.

This year, the company created a product team in this unit focused on the metaverse and it recently announced plans to hire 10,000 employees in Europe over the next five years to work on the effort.

In an interview with tech publication the Information, Zuckerberg said he has not considered stepping down as CEO, and has not thought “very seriously yet” about spinning off this unit.

The division will now be called Reality Labs, its head Andrew “Boz” Bosworth said on Thursday. The company will also stop using the Oculus branding for its VR headsets, instead calling them “Meta” products.

The name change, the plan for which was first reported by the Verge, is a significant rebrand for Facebook, but not its first. In 2019 it launched a new logo to create a distinction between the company and its social app.

The company’s reputation has taken multiple hits in recent years, including over its handling of user data and its policing of abuses such as health misinformation, violent rhetoric and hate speech. The U.S. Federal Trade Commission has also filed an antitrust lawsuit alleging anticompetitive practices.

The plans to phase out the Facebook name even from products like video calling device Portal show the company is eager to prevent the unprecedented scrutiny from hurting the rest of its apps, said Prashant Malaviya, a marketing professor at Georgetown University McDonough School of Business.

“Without a doubt, (the Facebook name) is definitely damaged and toxic,” he said.

Zuckerberg said the new name, coming from the Greek word for “beyond,” symbolized there was always more to build. Twitter Inc (NYSE:) CEO Jack Dorsey on Thursday tweeted out a different definition “referring to itself or to the conventions of its genre; self-referential.”

Zuckerberg said the new name also reflects that over time, users will not need to use Facebook to use the company’s other services.

In 2015, Google reorganized to create a new holding company called Alphabet (NASDAQ:) Inc, as the popular search engine broke into new fields such as self-driving cars, high-speed broadband and expanded its cloud business. Snapchat also rebranded to Snap Inc (NYSE:) in 2016, the same year it launched its first pair of smart glasses.

Facebook, which this year launched its own pair of smart glasses https://www.reuters.com/technology/facebook-unveils-its-first-smart-glasses-2021-09-09 with Ray-Ban, announced a slew of new AR and VR product updates during Connect. These included a way for people using its Oculus VR headset to call friends using Facebook Messenger and for people to invite others to a social version of their home, dubbed “Horizon Home.”

Zuckerberg also showed video demos of what the metaverse could look like, with people connecting as avatars and being transported to digital versions of various places and time periods. He said that the metaverse would need to be built with safety and privacy in mind.