It has been another bumpy week for the market. One day the market was down -1.5%, followed by a quick +2.5% bounce, only to again retreat with several days of continued selling to finish the week. Bonds are in rally mode after recovering from a steep sell off, thanks to the anticipation of rising rates.

This week’s market action was simply a continuation of what we’ve seen for the past few months; the market making a fledgling attempt to stay afloat amongst a wave of pressures including inflation, supply chain disruptions, and geopolitical stress.

Below are several charts covering the past five months which provide an illustration of what we have witnessed. 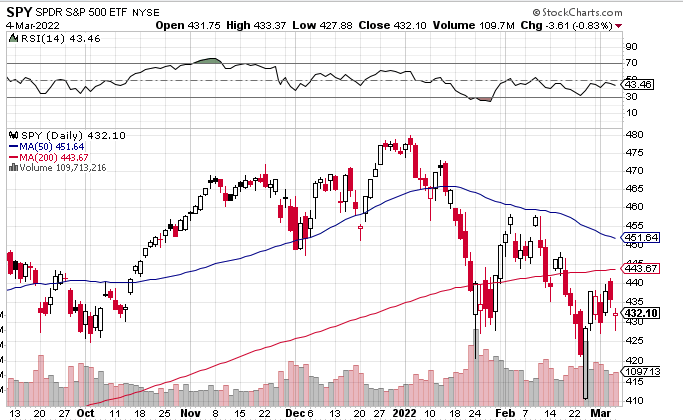 While the SPDR® S&P 500 (NYSE:) is still down on the year (-8.8%), it has had a few significant and quick reversals to the upside typically because of some newsworthy event that temporarily provides renewed optimism.

One of the key drivers has been earnings reports which show better than expected earnings. Combined with a negative news cycle which has created a more dovish approach by the Federal Reserve at their upcoming meeting. Of course, most of that negative news (not greed) has been about the aggressive actions by Russia in Ukraine.

An overriding theme guiding the market right now is , as we have reiterated on several occasions the past few weeks. Discussing it, however, has done nothing to stop higher (especially ) and agriculture prices. See the chart below, which hit new multi-year highs of $115+ on the spot oil commodity markets Friday.

These rapid rises are going to have a punishing effect on the consumer and may have prompted the Federal Reserve Governor’s thinking that more, not less, interest rate rises are due.

But The Economy Seems To Be Doing Very Well

For the moment this is true. There was a pent-up demand for goods and services coming out of the Pandemic. Actually, personal consumption was down to a minimum and people were saving a good amount of $ during 2020 and 2021.

As the economy is reopening, people are their savings to enjoy travel, entertainment, restaurants, durable goods, apparel, and more consumer activities. The problem now is that the cost of everything, from cars, to hotels, rental cars, concerts and of course, a meal out, have gone up and in some cases through the roof.

Although the expectation was for everyone’s pandemic nest egg to last a while, the chart below suggests otherwise: 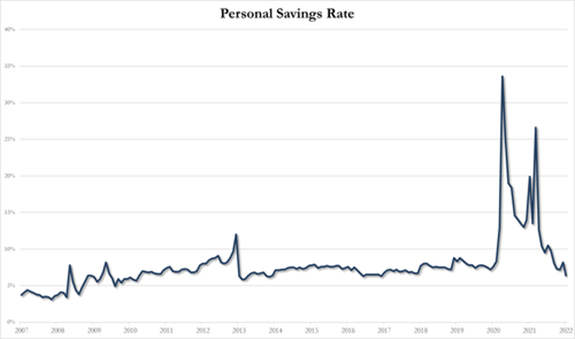 Since many people in this country live on Fixed Income returns, let us address that area of the market. On the expectation of higher interest rates coming, fixed income securities (and the yields on them that run inverse to prices) have been on a seesaw with erratic behavior.

After starting the year around 1.55% on the rates, then going much higher to over 2.0% only a few weeks ago, 10-year Treasuries have rallied in risk-off mode and settled once again around 1.85% today. A 2 month round trip that could make any conservative fixed income investor’s head spin. See chart below: 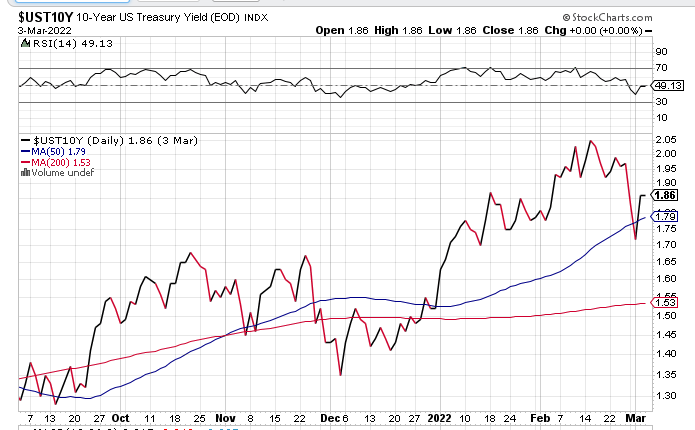 The expectation of oil scarcity in the Western world has catapulted the sudden rise in the value of the . Additional factors including a flight of quality as the collapses to near worthless status.

This would normally have a dampening effect on commodities but in fact, the opposite has occurred with SPDR® Gold Shares (NYSE:) hitting new highs and the in full on rally mode. See both below: 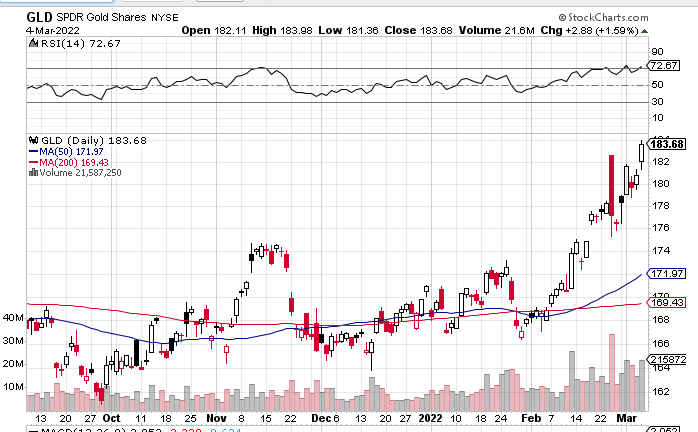 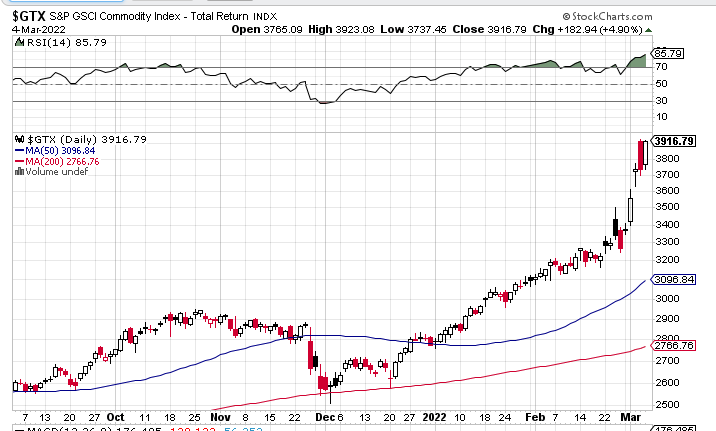 One thing that should be a clear takeaway is that the intersection of geopolitical stress and inflation is the perfect concoction for extended rallies in gold and commodities with downward pressure on equities.

Here are some other observations from our Big View indicators: