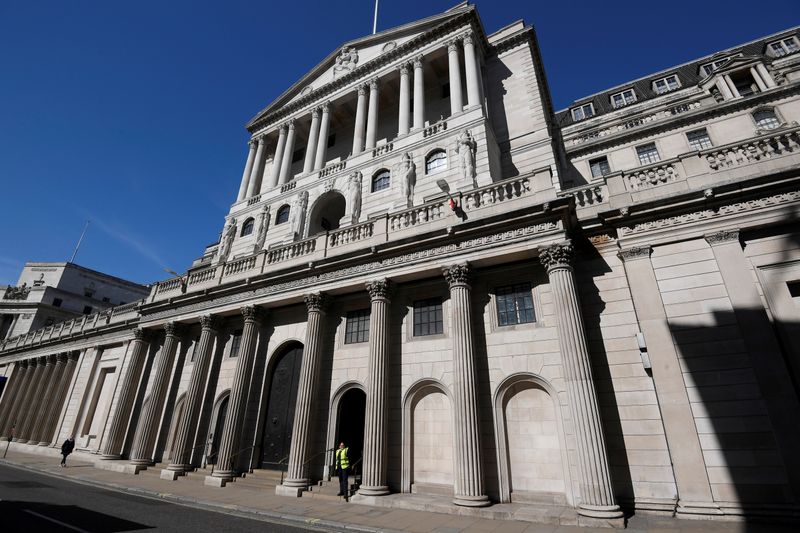 © Reuters. FILE PHOTO: The spread of the coronavirus disease (COVID-19) in London

LONDON (Reuters) – Fewer British workers remained on furlough from their employers last month as the government scaled back its support for businesses hit by COVID-19 before ending the scheme on Oct. 31, two surveys showed on Thursday.

The Bank of England said its monthly survey of businesses showed that 7.0% of their staff were on furlough and not working any hours in September, down from 11.8% in August and a peak of 36.2% in April when coronavirus lockdown measures were tightest.

A survey by the Office for National Statistics estimated that 11% of staff were partly or fully on furlough between Sept. 7 and Sept. 20.

Britain’s furlough scheme supported 8.9 million jobs at its peak, and is forecast to cost around 52 billion pounds ($67 billion) over its eight-month lifespan.

Since July businesses have been allowed to bring furloughed staff back part time, and since August they have had to contribute an increasing amount towards the scheme’s costs.

Last week, finance minister Rishi Sunak confirmed he would not extend the programme beyond its scheduled end date of Oct. 31 and instead offered a more limited subsidy to workers who are re-employed on reduced hours.

Economists have warned that unemployment risks rising sharply after the furlough scheme ends, with the BoE pencilling in a jump in the jobless rate to 7.5%, and the government’s Office for Budget Responsibility predicting 11.9%.

The reduction in support comes at a time when rising numbers of COVID cases are forcing British authorities to reimpose restrictions on socialising in much of the country, hurting pubs, restaurants and the broader hospitality trade.

The proportion of British people commuting to work has also fallen, to 59% from 64%, since Prime Minister Boris Johnson urged people on Sept. 22 to return to working from home where possible, the ONS said.

The BoE survey showed that businesses overall now expect a post-lockdown recovery in sales to stall in the fourth quarter, with revenue predicted to remain 14% below pre-COVID levels, unchanged from the third quarter.

Businesses’ worries about Brexit are also at their highest since December last year, with Britain and the European Union still at loggerheads over a trade deal that needs to be concluded before the end of the year to limit disruption.