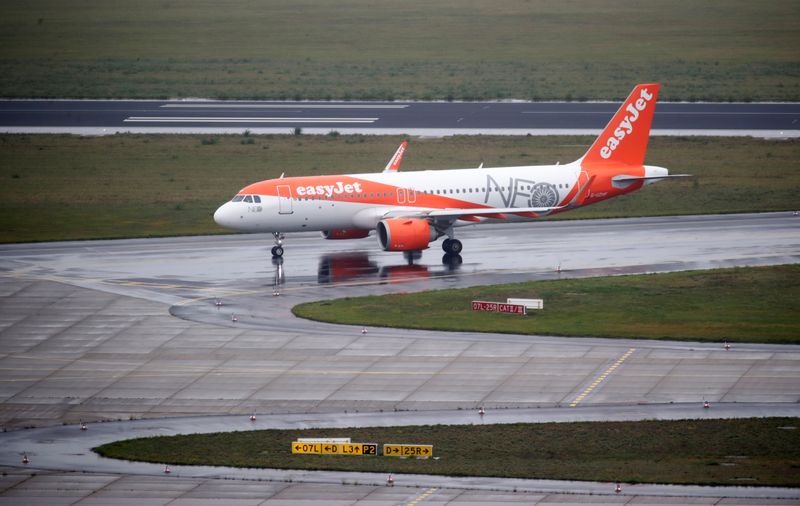 © Reuters. Official opening of the new Berlin-Brandenburg Airport in Schoenefeld

BERLIN (Reuters) – The first passengers landed at Berlin’s new airport on Saturday, nine years after it was originally due to open and as the global aviation industry struggles with collapsing demand due to the coronavirus pandemic.

Dozens of climate activists demonstrated at the new airport on Saturday, carrying signs reading “Flying is so yesterday” and “BER opening cancelled due to the climate crisis”, using the code for the full name of Berlin-Brandenburg Willy Brandt Airport.

Construction on BER began in 2006 and the airport was originally due to open in 2011. But construction problems and technical issues saw the date pushed back repeatedly, a major embarrassment that dented Germany’s reputation for efficiency.

The delays left Berlin relying on two outdated and increasingly crowded Cold War-era airports: Tegel, which served the west of the city, and Schoenefeld, which was once Communist East Berlin’s airport and which has been integrated into the new facility.

The first plane to land was an Easyjet flight, a special service that took off from Tegel on the other side of the city. That airport will close next weekend.

“With just one airport, we can make our business much more efficient,” Easyjet Chief Executive Johan Lundgren told Reuters before the flight.

Because of the coronavirus pandemic, Easyjet is cutting its fleet based in Berlin to 18 planes from 34 and cutting 418 out of around 1,500 employees, while another 320 staff will work shorter hours until next June.

The new airport, which is owned by the German federal government and the states of Berlin and Brandenburg, cost nearly 6 billion euros ($7.1 billion), roughly three times the initial budget, and is not expected to make enough revenue to pay back its debts.

That means the airport will need grants, restructuring, a strategic investor, equity from its owners – or a combination of these – to put it on a more solid financial footing.