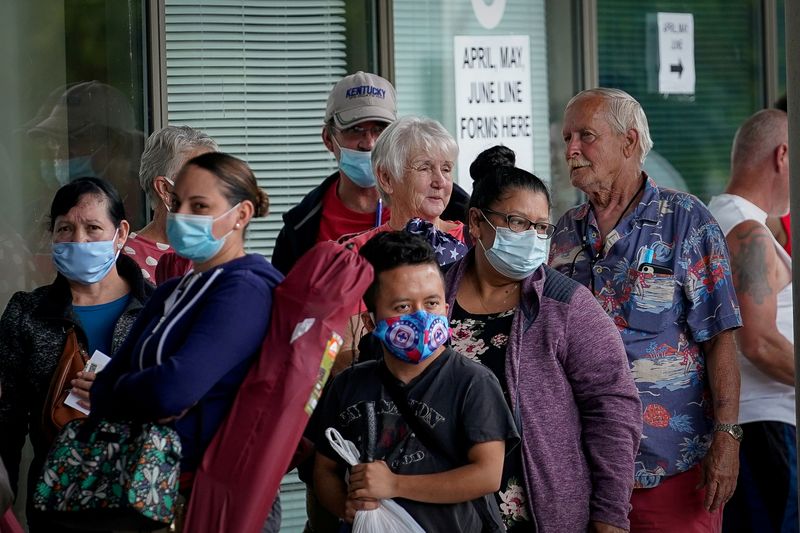 © Reuters. FILE PHOTO: FILE PHOTO: People line up outside a Kentucky Career Center hoping to find assistance with their unemployment claim in Frankfort

(Reuters) – Friday’s big monthly U.S. payrolls report was a big disappointment, with roughly half the number of jobs created in November as were forecast by economists in a Reuters poll.

But the troublesome signs for the labor market were hardly limited to the underwhelming headline number, which showed the weakest job growth since the recovery began from the swoon induced by the COVID-19 outbreak earlier this year.

Here are five worrying factors in the report:

HOUSEHOLD VS ESTABLISHMENT: WHO IS RIGHT?

The report is fueled by two surveys – one of U.S. businesses and one of American households. The so-called “establishment” data on total employment from businesses is much less noisy than the household results, but more often than not the two at least move in the same direction.

In November they did not. Businesses reported adding 245,000 jobs last month, but households reported employment fell by 74,000. It was the first negative print in that series since the historic dive in employment in April.

Graphic: Who to believe – businesses or households? – https://fingfx.thomsonreuters.com/gfx/mkt/ygdpzbzokpw/Pasted%20image%201607106576528.png

Some 400,000 fewer people reported being a member of the work force in November, the third drop in the last five months.

One sign of a healthy labor market is a consistently growing labor force – those employed and those in the market for a job. After an initial bounce back in May and June, the labor force has moved sideways since and remains more than 4 million short of what it was before the pandemic struck.

Graphic: The labor force is not growing – https://fingfx.thomsonreuters.com/gfx/mkt/nmopadxgjva/Pasted%20image%201607105862012.png

One reason people cite for dropping out of the work force is that they are too discouraged by the state of the job market to look for work. The ranks of these workers are back near the five-year high reached in July after having grown in November for the third straight month and by the most since June. Graphic: Discouraged worker ranks are rising again – https://fingfx.thomsonreuters.com/gfx/mkt/dgkplarowvb/Pasted%20image%201607105427305.png

When the pandemic first struck and triggered more than 20 million job losses in a single month back in April, the vast majority of those thrown out of work expected their layoffs to be temporary. That dynamic has changed.

In November, more than 4.7 million people were categorized as “not on temporary layoff” – meaning their job was permanently eliminated or they had completed a temporary job that was not extended. That is nearly 2 million more than those counted as being temporarily out of work and was the highest level in seven years.

UNEMPLOYMENT DURATION IS GROWING LONGER FOR MANY

In February, just before the coronavirus pandemic broadsided the economy and job market along with it, fewer than 20% of the 5.8 million people then counted as unemployed had been out of work for 27 weeks or longer.

Fast forward to November and nearly 37% of the 10.7 million jobless Americans had not worked in roughly half a year or longer. That percentage is the highest since December 2013.