Ford Motor Company (NYSE:) and Facebook (NASDAQ:) both rose yesterday, along with Amazon (NASDAQ:) and Tesla (NASDAQ:), to help the S&P 500 brush off Wednesday’s late-day decline. For the day, the index rose nearly one percent. Ford helped boost the market’s mood, jumping over 8% as they smashed earnings estimates for the third quarter. In addition, Facebook is trying to improve upon its tarnished image by its name to Meta. (I guess MySpace and ZuckBook were already taken.) Effective December 1st, FB will trade as MVRS.

More importantly, GDP weakened to 2.00% in the third quarter, well below estimates of 2.70%. While the first estimate gets matched to economists’ estimates, we will likely see the subsequent two calculations track lower toward the Atlanta Fed’s 0.2% forecast. PCE, the Fed’s preferred inflation gauge, rose 5.7%, above estimates, but less than last quarter’s 6.1% inflation rate.

This morning, futures are being dragged lower by earnings misses in both Apple (NASDAQ:) and Amazon. Starbucks (NASDAQ:) also is pulling back on disappointing results.

What To Watch Today

As shown in the chart below, the market has gotten well ahead of itself short term. Notably, despite the rally yesterday, the number of stocks trading above their respective 50-dma declined, and the MACD peaked. Historically, such has led to a short-term correction. 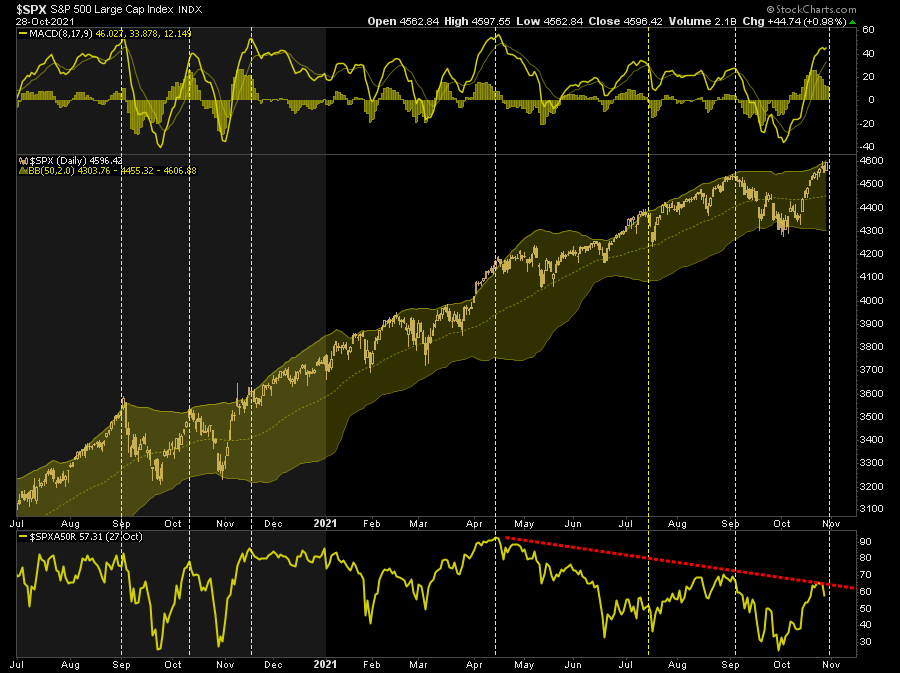 However, as we will discuss in this weekend’s newsletter, liquidity flows remain incredibly bullish. Global liquidity has now topped $1 trillion for the year, along with share buybacks which are now at a record. Given that buybacks have accounted for nearly all of the market’s net buying, there is no risk near term of a significant correction. However, such does not preclude short-term sell-offs and a pick-up in overall volatility. 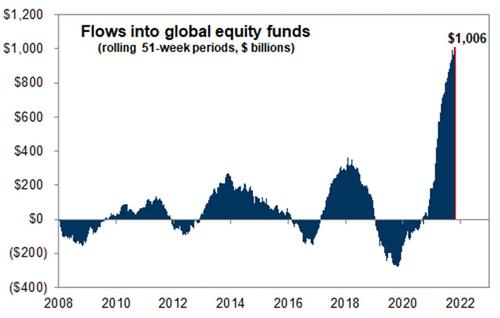 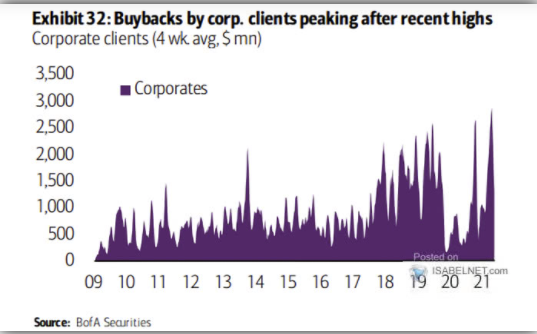 The graph below, courtesy of Nautilus Capital, shows that earnings yields on the S&P 500 are at the lowest levels since the early 1980s. The lower graph and table break historical readings of the earnings yield into quadrants. As the table shows, the lowest quadrant produces minimal positive returns versus double-digit returns for the other three quadrants. 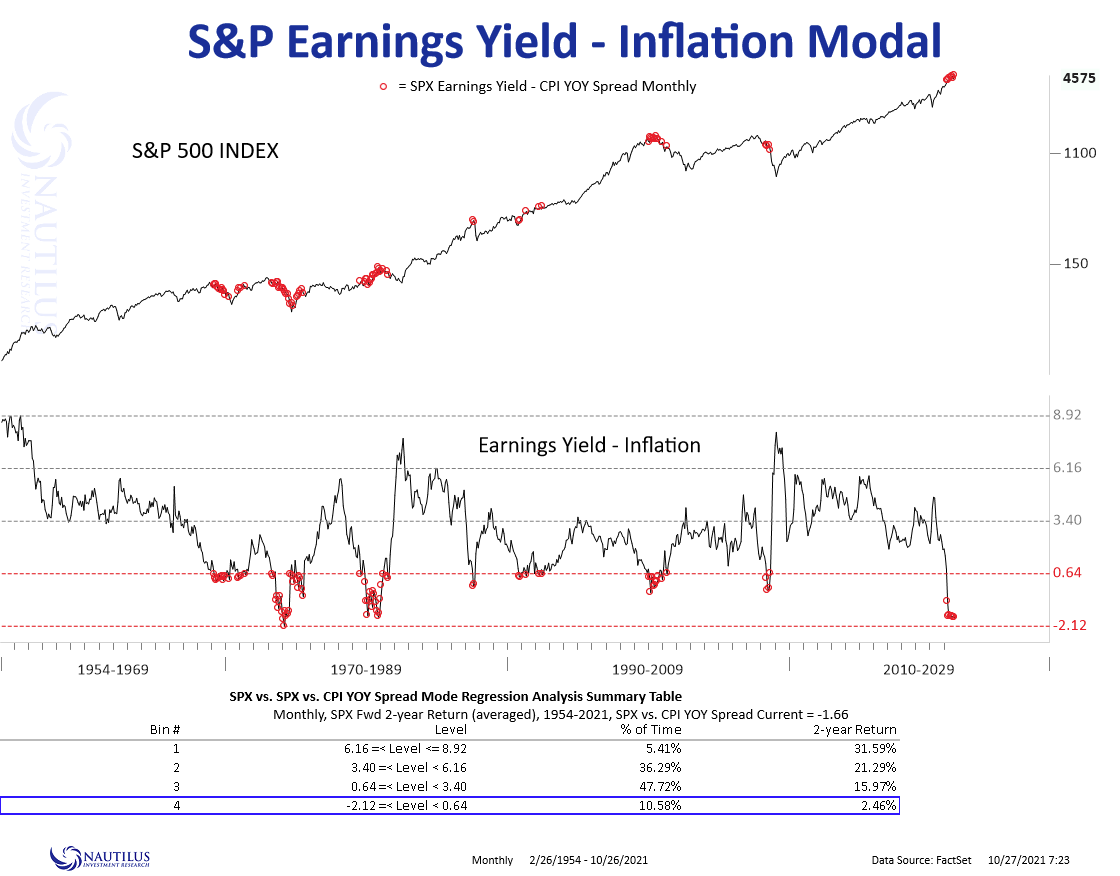 Apple missed analyst expectations on revenue, with its iPhone, Mac, and Wearables businesses coming up short amid the ongoing chip shortage. According to Reuters, supply constraints knocked $6 billion off the company’s top line in the quarter.

Here are the most critical numbers from the report compared to what Wall Street was expecting, as compiled by Bloomberg.

While the company missed on analyst expectations, quarterly revenue was up 29% year-over-year. Still, the stock was down 5% following the announcement. We hold a 3% position in the Equity Model. 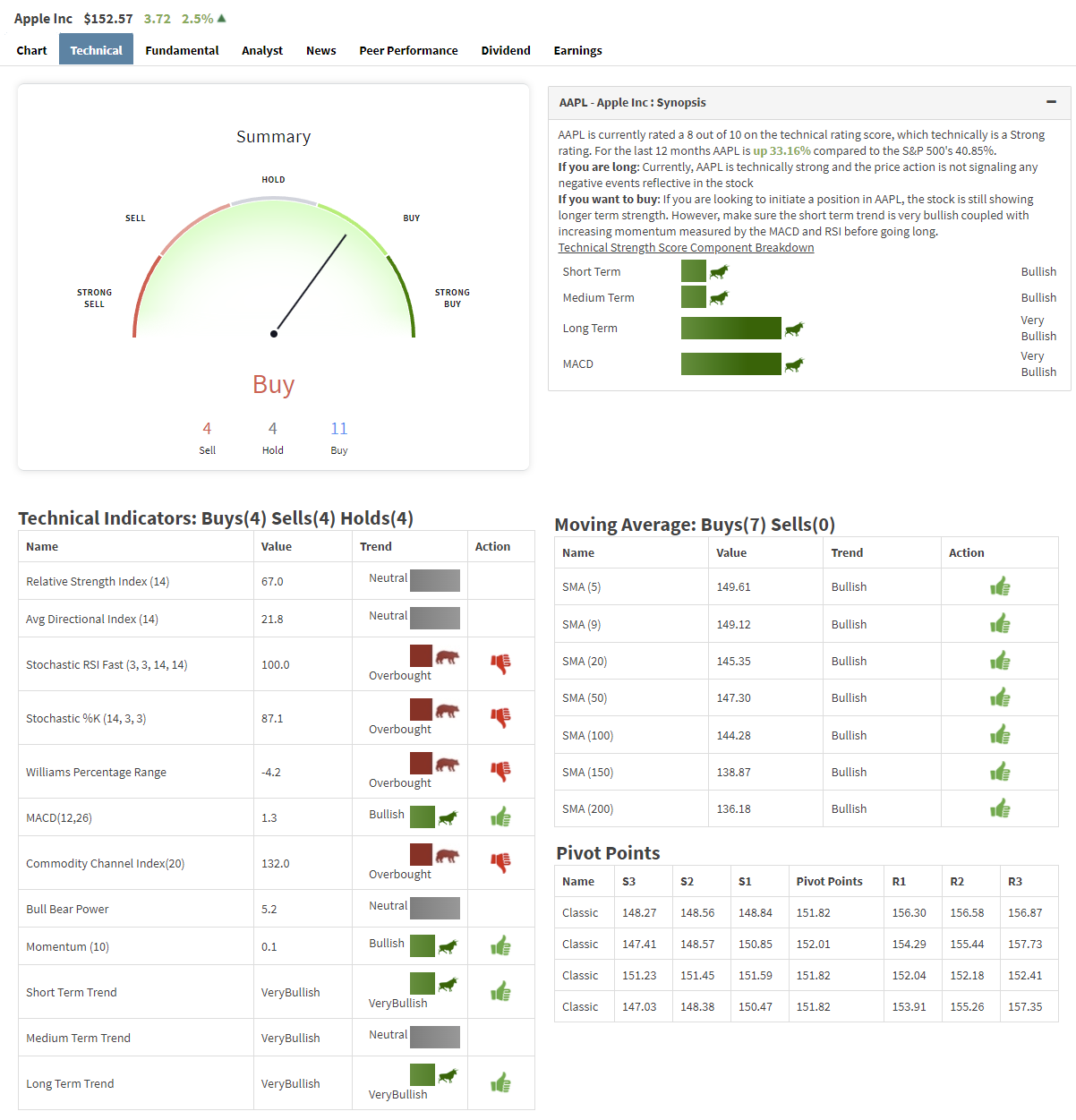 Amazon reported sales and earnings results that missed Wall Street’s estimates, reflecting a growth deceleration after the pandemic stoked a surge in online shopping last year and earlier in 2021.

The company also flagged that it would see additional costs due to supply chain challenges in the fourth quarter. As a result, shares dropped by more than 4% in late trading.

Here were the main metrics from Amazon’s report, compared to consensus estimates compiled by Bloomberg:

We hold a 2.5% position in the Equity Model. 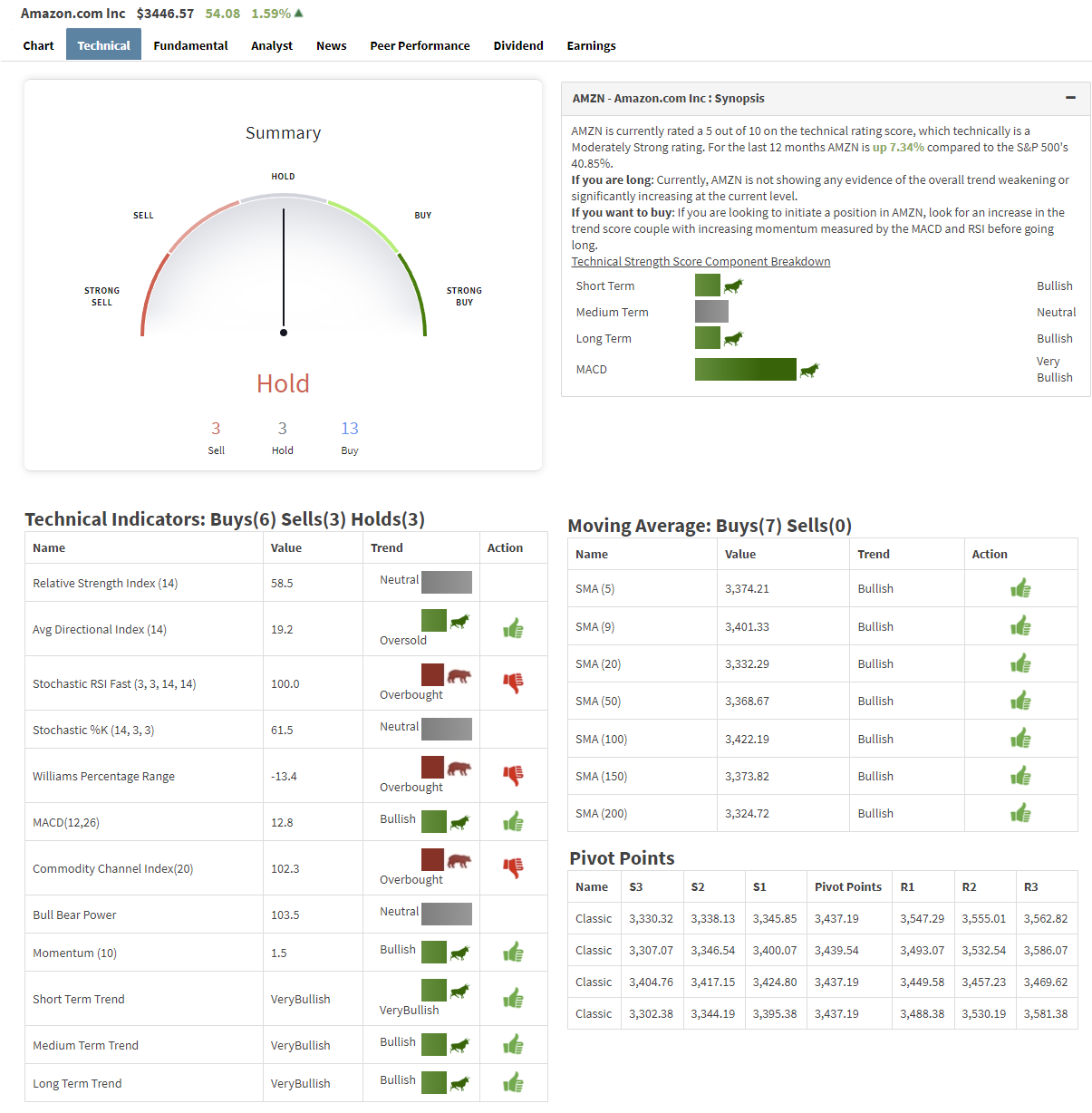 According to the Bloomberg consensus estimates:

Weakness abroad appeared to be the biggest drag on the coffee maker’s results, as the Delta variant of COVID-19 took its toll on sales. Nevertheless, for the fiscal quarter that ended on October 3rd, 2021, comparable transactions in the U.S. increased by 18%, while the average ticket size went up 3% on record global revenues.

Given the technical weakness and violation of our stop-loss, we will remove the position from the portfolio temporarily. We own a 1% position in the Equity Model. 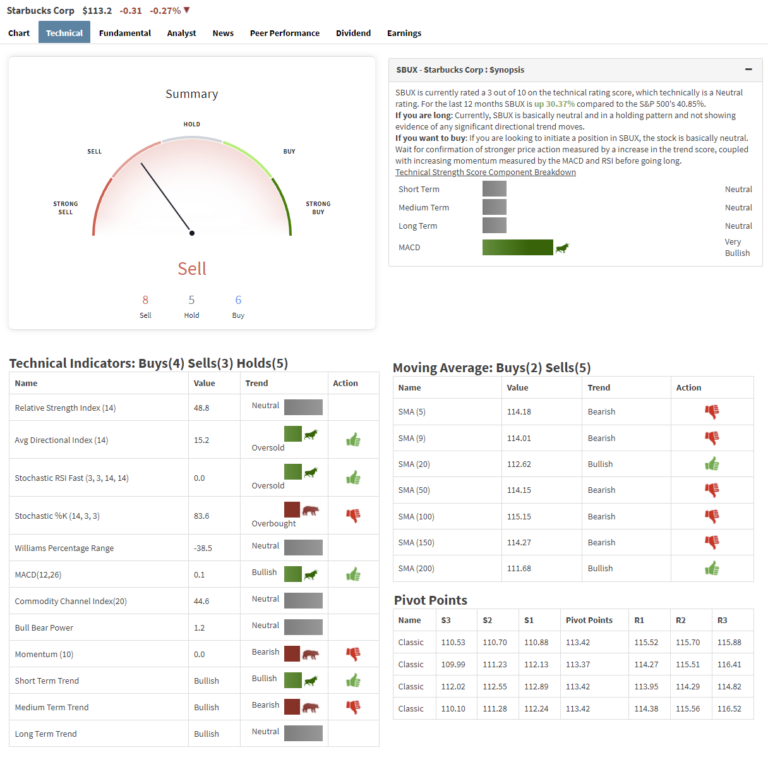 F reported earnings for the third quarter of 2021 yesterday after the close. GAAP EPS of $0.45 smashed the consensus estimate of $0.21, driven by “significant increases in semiconductor availability and wholesale vehicle shipments from Q2”. In addition, automotive revenue came in slightly above consensus at $33.2B (-4.3% YoY) versus expectations of $32.8B. Notably, F saw its North America EBIT margin improve to 10.1% from 7.6% in 3Q20.

Management increased guidance for FY21 adjusted EBIT to a range of $10.5B-$11.5B from the previous $9B-$10B. FY21 adjusted free cash flow guidance remains unchanged at $4B-$5B. F also announced that it reinstated its quarterly dividend at $0.10/share after suspending it in 2020, implying a forward yield of roughly 2.5%. The stock is trading 8.7% higher this morning following the upbeat earnings. We hold a 3% position in the Equity Model. 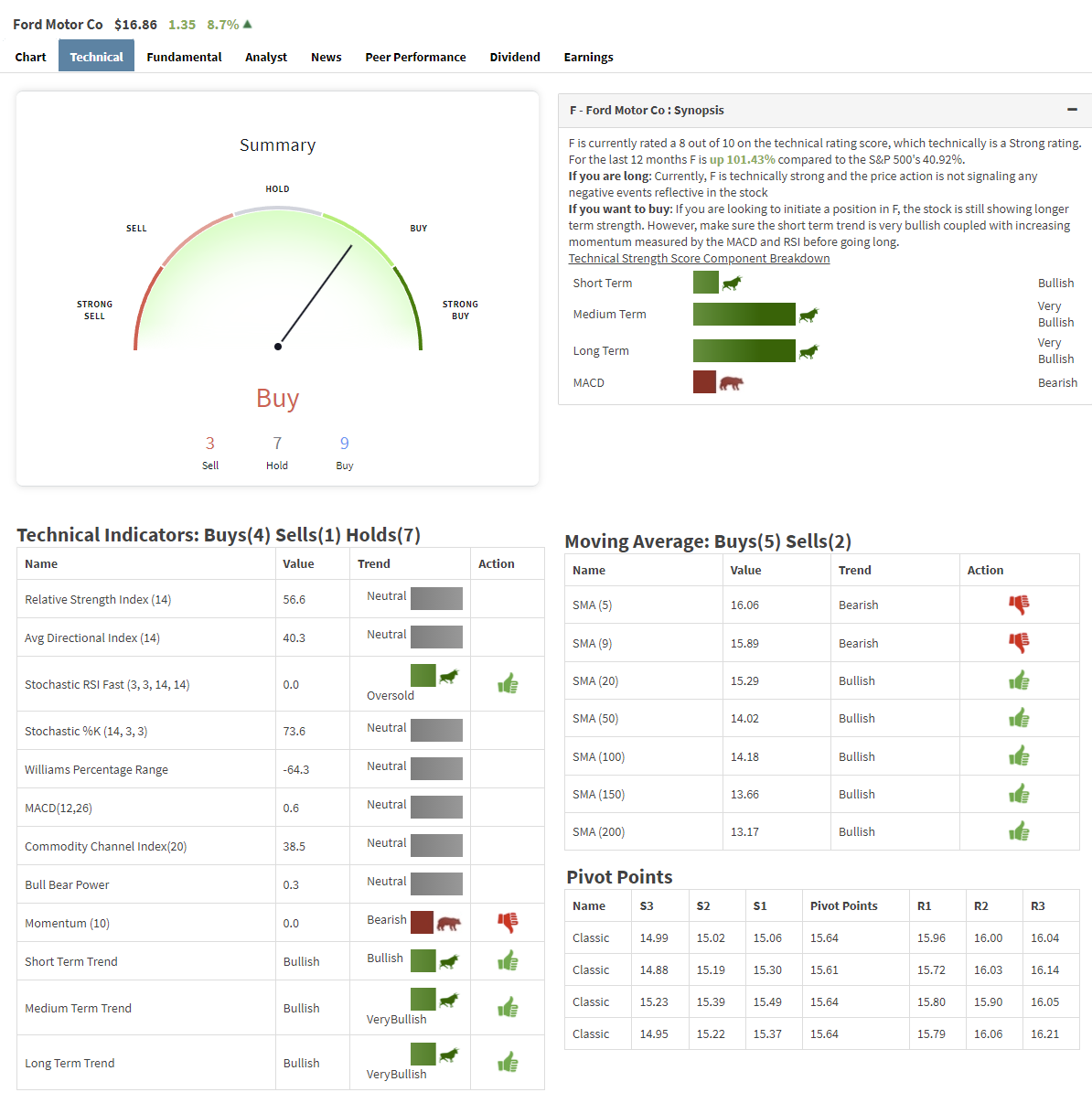 The good news is Q3 GDP, at 2%, is much higher than the Atlanta Fed’s 0.2% forecast. The bad news, it is decently below the consensus of economists forecast of 2.7%. Of concern, inventories added 2.1% growth to GDP. Without inventories, which in the long run contribute zero growth to GDP, GDP was flat. GDP got boosted by personal consumption expenditures (PCE) which rose 1.6%. We suspect GDP will be revised lower as PCE is likely overstating consumer economic activity. Durable goods and auto sales weighed heavily on GDP, primarily due to shortages and transportation problems. As these problems resolve themselves, GDP should benefit.

As we discussed last week:

“At the beginning of Q2, the Atlanta Fed pegged economic growth at 13.5%. By the time GDP got reported by the Bureau of Economic Analysis, it was just 6.5%. The Atlanta Fed has ratcheted down Q3, which will get reported later this month, to just 0.2%. So far, while hopes are for more robust economic growth in Q4, there is a high probability of disappointment.

For the bearish view, the implications of substantially weak economic growth are broad. Consumer sentiment will continue to remain weak, and increased inflationary pressures will further undermine consumption. The impact on earnings will leave the bulls disappointed.” 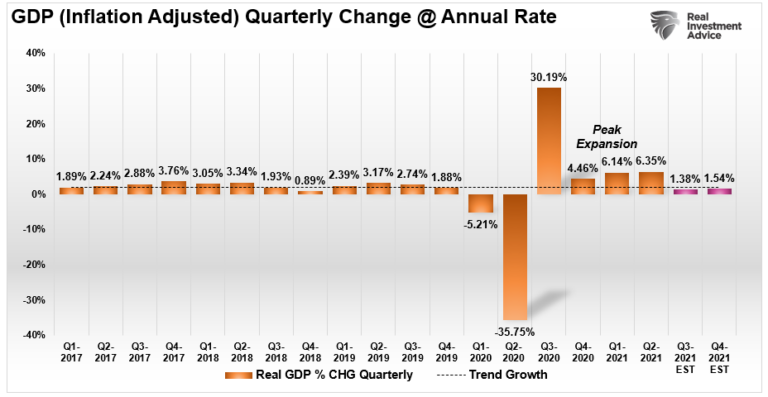 One of the main reasons for the Atlanta Fed’s weak forecast is Real Final Sales. The Atlanta Fed expects this significant contributor to GDP to drop 1.6%. As the graph shows, every time Real Final Sales has fallen below zero since the early 1950s; a recession has occurred. 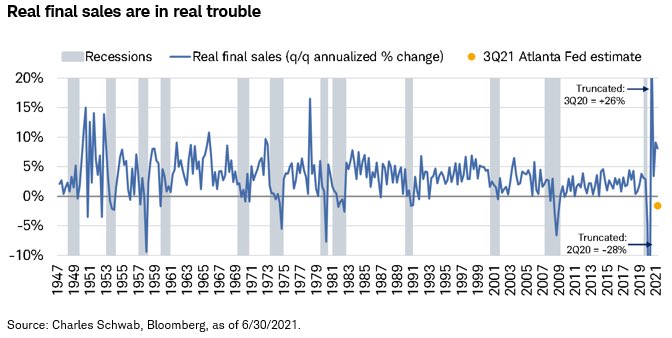 Economists have been racking their brains for the last nine months trying to pinpoint why there are still shortages of many goods. Yesterday’s inventory data and the graph below provide a clue. Retailer inventories fell 0.2%, while wholesaler inventories jumped 1.1%. The chart shows this is not just a one-month divergence but a trend existing for over a year. The most logical explanation is there are not enough truckers to deliver the goods from the wholesalers to the retailers. If this is the case, we should expect wholesale inventories to stabilize, resulting in fewer orders to manufacturers. The other explanation is that retailers purposely order less, keeping shelves semi-stocked, thus allowing them to charge more and pass higher costs and wages on to consumers.