Dog coins are back in demand. On-chain data suggests that could be next to reap the benefits.

Dogecoin has resumed its uptrend as canine coins are soaring again. If buy orders continue to pile up, DOGE could enter a 64% bull run.

The cryptocurrency market appears to have entered its second dog coin season.

Several so-called dog tokens have rallied this week following Shiba Inu’s dramatic rise. The Dogecoin competitor has surged throughout the month, hitting an all-time high Wednesday as it entered the top ten cryptocurrencies by market cap. Many other similar coins such as Floki Inu and the Solana-based Samoyedcoin are also trading in the green amid heightened interest in dog-themed assets. Samoyedcoin is among the biggest gainers: it’s up 115% overnight after an 815% rally over the last two weeks.

The wave of renewed interest comes despite Vitalik Buterin’s recent move to sell millions of dollars worth of dog tokens that he’d inadvertently received in his wallet; Buterin pulled a similar stunt in May when he donated $1 billion worth of Shiba Inu to India’s COVID-19 relief fund, helping prices crash due to the lack of liquidity. Around the same time, Shiba Inu and Dogecoin both shed billions of dollars of value in a matter of days during a market-wide crypto crash.

The ninth-largest cryptocurrency by market cap has endured a prolonged stagnation period and now looks primed for higher highs after breaching a critical area of resistance. DOGE’s price action had been contained within a symmetrical triangle since June 3, but a recent bullish impulse has allowed it to break out of this consolidation pattern. Further buying pressure could see Dogecoin rise by more than 64% toward $0.47.

The can be determined by measuring the height of the triangle’s y-axis and adding that distance upward from the breakout point. 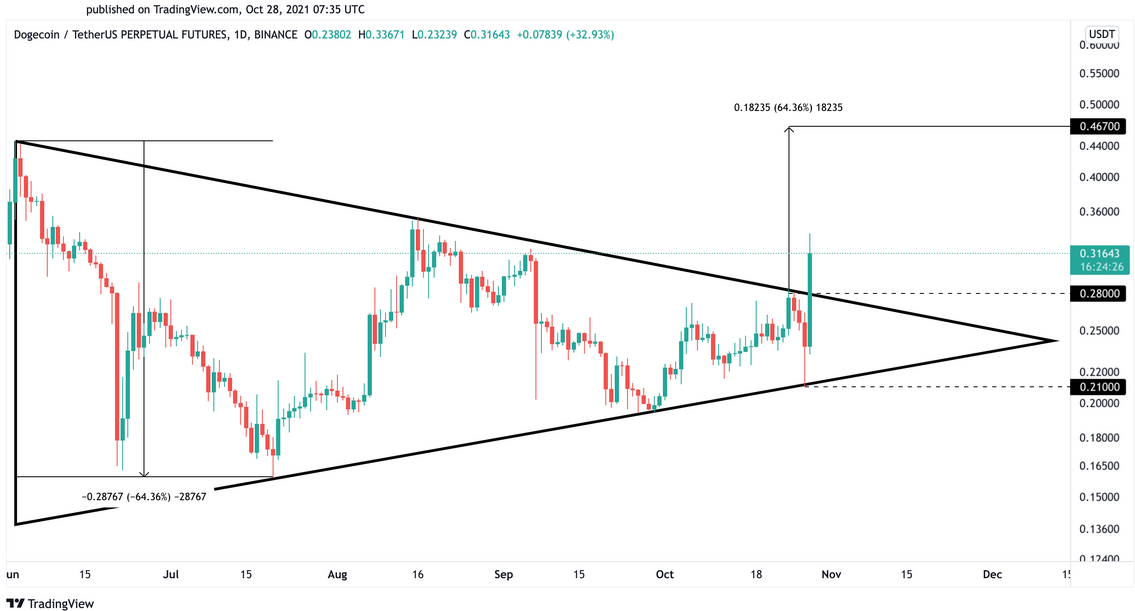 Although Shiba Inu has led the latest dog coin wave after entering a 1,140% bull run to reach new all-time highs, it seems that investors are now preparing for Dogecoin to follow the same path.

The number of transactions worth over $100,000 on the network has significantly increased in the last four days. Roughly 3,500 large transactions are currently being executed on the Dogecoin network, representing a 162.4% increase since Oct. 23.

The increase in on-chain activity might suggest that institutional players and whales are starting to take control of the price action. If this metric continues to record higher highs, the odds would likely favor the bulls, meaning DOGE may achieve its full upside potential.

It is worth noting that a decisive candlestick must above $0.28 for the bullish outlook to prevail. Failing to stay above this support zone could result in a steep correction for Dogecoin as $0.21 is the most significant interest area underneath it.

Facebook
Twitter
Pinterest
WhatsApp
Previous articlePowers On… Why US officials ignore ethics and STOCK Act by trading stocks? – Cointelegraph Magazine
Next articleShell says break-up of group would not work in real life By Reuters