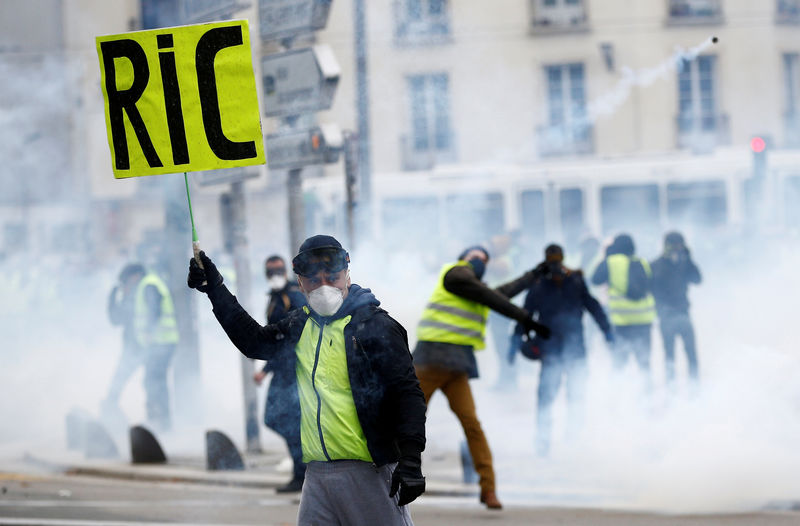 © Reuters. FILE PHOTO: A protester wearing a yellow vest attends a demonstration of the “yellow vests” movement in Nantes

PARIS (Reuters) – French consumer confidence jumped in February to its highest level since “yellow vest” protesters started their weekly demonstrations, as households took heart in an improvement in their finances and unemployment fears receded.

The reading of 95 points marked the highest level for the consumer confidence index since October, which was the month before “yellow vests” protesters started weekend marches against high living costs and President Emmanuel Macron’s policies.

The increase in the index by the national INSEE statistics office, which beat the average forecasts of economists, came as Macron’s costly measures to boost workers’ income and quell the protests kicked in this month.

In December, the French leader decided to speed up an increase in benefits received by the poorest workers, halt a planned rise in fuel taxes, and reduce taxes on overtime, for a total cost of 10 billion euros ($11.35 billion).

The national statistics office, INSEE, said the number of consumers who had observed an improvement in their finances in the past year had increased, while more of them also expected the increase to continue in the future.

France’s unemployment rate fell unexpectedly at the end of last year to its lowest level since the start of 2009, official data showed earlier this month.

The brighter outlook is good news for Macron, whose popularity has started to recover from its worst level at the peak of the “yellow vest” crisis in December.

The 41-year-old leader has launched a series of debates across the country aimed at reconnecting with voters, particularly in rural areas.

Weekly “yellow vest” marches continue every Saturday, but turnout has fallen and support for the movement among the broader public as waned, polls show.

Named after the fluorescent jackets motorists must keep in their cars, the grassroot “yellow vest” protests started in mid-November as a revolt against high prices at the pump, before morphing into a broader challenge to Macron’s pro-business policies.