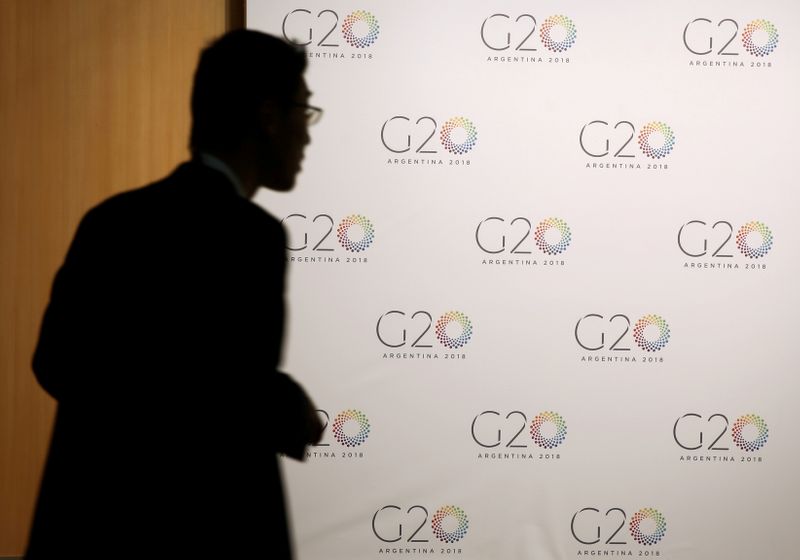 © Reuters. FILE PHOTO: A man stands next to a board with the G20 Meeting of Finance Ministers logo in Buenos Aires

PARIS/TOKYO/WASHINGTON (Reuters) – G20 countries have agreed for the first time on a common framework for restructuring government debt, in anticipation of the coronavirus crisis leaving some poorer nations struggling to pay and in need of relief.

With the COVID-19 pandemic straining the finances of some developing countries, G20 finance ministers said on Friday that more help was needed than a current temporary debt freeze, which will be extended until June 30, 2021.

Major creditors, including China, will be expected to follow the joint guidelines agreed by the G20, which lays out how debt deemed to be unsustainable can be reduced or rescheduled.

Non-governmental groups said the accord should have gone further by including middle-income countries and forcing private investors to accept cancellations.

The coronavirus crisis has exacerbated problems for the poorest countries, 50% of which are now in or at risk of debt distress and in an early sign of its impact, Zambia is on the brink of becoming Africa’s first COVID-era sovereign default.

“I count on everyone’s constructive spirit to ensure swift and cooperative implementation of the common framework, with several countries already asking for debt treatments, in particular in Africa,” French Finance Bruno Le Maire told his G20 counterparts during an online meeting.

China, which accounted for 63% of overall debt owed to G20 countries in 2019, has been reluctant to acknowledge the need for outright cancellation or reduction of debts.

Under the new framework, creditor countries will negotiate together with a debtor country, which will be expected to seek the same treatment terms from private sector creditors.

The scheme borrows heavily from the rules established by Paris Club, an informal grouping of mostly rich country governments established in 1956, that until now was the only joint forum for negotiating debt restructurings.

The G20 finance ministers said in a joint statement that the new framework aims “to facilitate timely and orderly debt treatment” for countries eligible for the debt payment freeze put in place in April, but which only included private sector creditors on a voluntary basis.

“From now on all interested parties must ensure to implement the common framework. Debt transparency is extremely important,” Japanese Finance Minister Taro Aso told reporters after a G20 conference call, describing the agreement as “historical”.

The new framework also goes further by requiring all public creditors to participate, after China was criticised by G20 partners for not including debt owed to its state-owned banks.

While China signed on to the framework, it remained unclear how it would implement the measures, one source familiar with the negotiations told Reuters.

Tim Jones, head of Policy at Jubilee Debt Campaign, said in a statement that the G20 announcement allowed for, but discouraged outright debt cancellation, and did not create a mechanism to compel private sector participation.

“This announcement falls far short of what is needed to tackle the wave of debt crises in poorer countries,” he said.

“With many countries facing debt crises and Zambia today on the verge of default, the G20 need to stop kicking the can down the road,” he added.

Eric LeCompte, a United Nations adviser on debt and executive director of Jubilee USA Network, said inclusion of private sector creditors was a significant step, but criticised the G20 for failing to include middle-income countries.

“Unfortunately, middle-income countries that will see some of the highest poverty increases due to the crisis, are excluded from this process, LeCompte said.

The Paris Club, which is organised by the French Finance Ministry, and G20 countries had already agreed last month to extend this year’s debt freeze under which they deferred $5 billion in debt servicing to help the world’s poorest countries.

G20 leaders are expected to endorse the common framework at a virtual summit meeting next week.