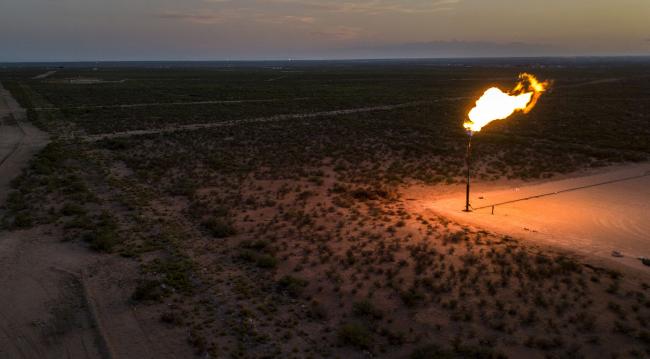 © Bloomberg. A gas flare in a field near Mentone, Texas. Photographer: Bronte Wittpenn/Bloomberg

(Bloomberg) — If there’s any country that might’ve been in a position to rescue Europe from its energy crisis, it’s the U.S. — home to vast shale fields holding a seemingly endless supply of natural gas and giant terminals capable of liquefying it and shuttling it abroad.

Instead, for a multitude of reasons, U.S. shale is in no position to bail out Europe. Indeed, supplies are so tight that Americans are staring down their own supply squeeze — and the accompanying sky-high utility bills.U.S. stockpiles haven’t been replenished as much as usual in recent months after summer heatwaves sent energy demand soaring and the post-pandemic industrial recovery diverted fuel to power plants and factories. Meanwhile, many major shale drillers have been funneling cash to shareholders and focusing on climate goals rather than boosting production.

The result: There’s very little supply cushion in the U.S., and whatever is available for export as liquefied natural gas is going to be fought over — not just by desperate European importers, but also by buyers in Asia, who face an energy crunch of their own and are willing to pay a premium.

This reality is a stark change from recent years that saw a steady domestic surplus and government efforts to promote exports as “molecules of U.S. freedom.” Americans are likely to face some of their highest energy bills in years. New York-traded gas futures have more than doubled so far in 2021, and the peak-demand season hasn’t even begun. The U.S. benchmark price jumped to a seven-year high this week, and it could more than double in the next few months, according to research firm BTU Analytics.“In theory, the U.S. is the Saudi Arabia of natural gas, but the reality is we have no new gas coming online,” said Campbell Faulkner, the chief data officer at OTC Global Holdings LP who formerly worked in risk-management and analysis at Royal Dutch Shell (LON:) Plc and JPMorgan Chase & Co. (NYSE:) “These prices tell you how worried people are about not having enough gas.”The consequences could go well beyond household heating bills. Europe stands as example of what could unfold, with its disastrous supply shortage leading to record prices, widespread corporate failures in the U.K. power market and the continent’s biggest chemicals producer BASF SE (OTC:) cutting output as its feedstock costs soar. And of course, prolonged gains for energy prices are compounding concerns about inflation and adding to the rising costs businesses are already shouldering for raw materials.

New York are on track for their steepest annual jump since 2000, when an early winter sparked massive consumption at a time when domestic energy production was stagnating. Prices more than quardrupled that year. Shale-extraction techniques advanced in the two decades that followed, opening up vast new resources and transforming the U.S. into a global exporter.Makers of plastics, fertilizers and other gas-derived products seized on the flood of cheap, reliable shale gas, spending billions of dollars to build or expand manufacturing plants. Concurrently, climate-conscious regulators, activists and investors pushed for the closure of much of the nation’s coal-fired electricity fleet, inadvertently increasing the grid’s reliance on gas-fueled generators.But then the steady expansion for production in U.S. shale fields suddenly slowed. Among U.S. shale executives, “there’s been a dramatic shift in sentiment away from production growth and toward shareholder returns and ESG initiatives,”  Connor McLean, an analyst at BTU, said in an interview, referring to environmental, social and governance goals. Gas stored in underground U.S. salt caverns and depleted water aquifers — a crucial source of fuel to augment pipelined supplies during the peak demand of winter months — is 21% below the 10-year average for this time of year,  according to research firm Vortexa Ltd. That helps explain why U.S. prices are surging. On the New York Mercantile Exchange, gas for October delivery on Monday jumped 11% and topped $5.50 per million British thermal units  for the first time since early 2014, when the Polar Vortex enveloped much of the U.S. in record-breaking cold.  Prices for December through February deliveries were even higher, signaling traders’ concern about the sufficiency of supplies.

In California, which is dealing with a unique set of challenges that include a scarcity of hydro power and summer-driven demand for electricity to run air conditioners, prices already are surging. Gas traded at the Southern California border reached $7.40 last week, while in the Los Angeles area it was almost $11, according to OTC Global Holdings LP.

U.S. gas output is only expected to rise by 1.1% during the second half of this year compared with the first six months, the Energy Information Administration said on Sept. 8. The residential, commercial and industrial sectors all will burn more gas this year than last, although overall demand may slip by 0.9% as soaring prices for the fuel prompt some electricity generators to switch to coal, according to the EIA. READ MORE: Europe’s Energy Crisis Is Coming for the Rest of the World, TooEven if an unexpected spell of mild weather frees up some U.S. supplies in coming months, gas exporters will almost certainly shun Europe and instead ship those cargoes to Asia where prices are higher, said Anna Mikulska, an energy-studies fellow at Rice University’s Baker Institute of Public Policy in Houston.

“Europe can’t lean on the U.S. for gas this winter,” said McLean of BTU.

As alarming as $7.40 gas is to U.S. buyers, prices in Europe and Asia are magnitudes higher: A key gas-import benchmark for Japan and Korea is approaching $30, while Europe is seeing the fuel command the equivalent of $25.

Citigroup Inc (NYSE:). warned prices may hit $100 during the final three months of the year as power producers, utility companies and manufacturers around the northern hemisphere vie for supplies. That’s more than double the bank’s previous forecast.

Those regional price dislocations also explain why any spare gas that American drillers manage to eke out this winter will probably head for Asia aboard liquefied gas tankers rather than remain home or traverse the Atlantic Ocean to Europe.

On the supply front, drillers haven’t responded to this year’s price gains by increasing investment in new North American discoveries because earlier this year they hedged most of their expected 2021 output, which locked them into selling supplies at lower prices, said Raoul LeBlanc, North American shale analyst at IHS Markit Ltd.

“Shareholders have been very clear that that money is theirs and they don’t want them to spend it on growing supply,” LeBlanc said.

Then there are the temporal and physical barriers.Anyone erecting a rig and beginning to drill a gas well today can’t realistically hope to see any fuel begin to flow for five or six months — or longer, depending on the jurisdiction. And with domestic liquefaction plants that prepare gas for shipment overseas already running close to full capacity, there’s no room to export more fuel even if supplies were on hand, according to Rystad Energy Vice President of Markets Sindre Knutsson.

“Gas producers looing at the strong forward curve really don’t have time to bring any new supplies online before the end of the winter,” said Jen Snyder, a managing director at research house Enverus.