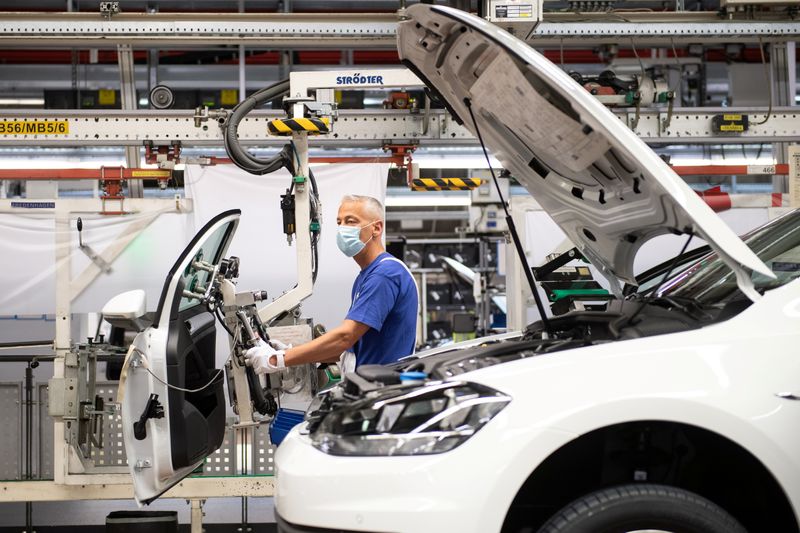 BERLIN (Reuters) – German industrial output rose by less than expected in September as the coronavirus crisis held back activity, data showed on Friday, suggesting Europe’s largest economy may not have the strength of avoid a double dip.

Industrial output increased by 1.6% on the month, figures released by the Federal Statistics Office showed. A Reuters poll had forecast a rise of 2.7%.

The rise was driven by a rebound in the auto industry, Germany’s largest manufacturing sector, which saw output rise by 10.0% in September after a decline of 10.3% in August.

“The manufacturing sector is gradually fighting back,” the Economy Ministry said in a statement.

“New orders and the business climate suggest that the recovery process will continue, even if this path will become even more rocky in view of the pandemic,” it added.

The economy grew by a record 8.2% in the third quarter on higher consumer spending and exports, but an aggressive second wave of infections and a new partial lockdown are now clouding the outlook for the fourth quarter and beyond.

A picture is emerging of German industry growing despite the pandemic, while services struggle.

A survey released on Wednesday showed that German services activity shrank for the first time in four months in October, a sign the economy was struggling even before the partial lockdown was imposed.

ING economist Carsten Brzeski expected industry to give the economy momentum going into the fourth quarter, but said new lockdown measures and weaker demand from other euro zone countries meant “this positive momentum will in our view not be enough to avoid (a) double dip for the German economy”.

Other recent German data have pointed to a fading recovery.

Industrial orders grew less than expected in September as euro zone orders dropped, data showed on Thursday.Business morale fell for the first time in six months in October due to concerns about rising virus infection rates.

The Ifo economic institute said earlier on Friday that production expectations for Germany’s industrial sector have weakened somewhat for the coming months, adding that it was unclear what impact lockdown measures would have.

Germany closed bars, restaurants, gyms, cinemas, theatres and domestic tourism on Monday for a month to combat the spread of the coronavirus.

The government has said small and medium-sized firms will be able to claim compensation worth 75% of their revenues from November 2019, up to 1 million euros.