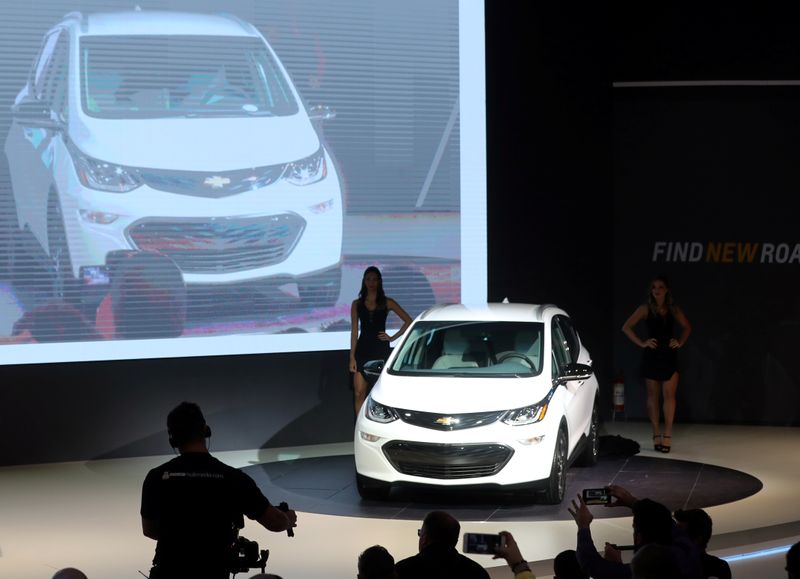 © Reuters. FILE PHOTO: Chevrolet Bolt EV is pictured during the media day of the Salao do Automovel International Auto Show in Sao Paulo

By Ben Klayman and David Shepardson

The National Highway Traffic Safety Administration (NHTSA) last month opened a preliminary investigation into the Bolt EVs after reports of three Bolts catching fire under the rear seat while parked and unattended.

GM said the vehicles pose a risk of fire when charged to full, or nearly full capacity. GM said it has developed software that will limit vehicle charging to 90% of full capacity to mitigate the risk while GM works to determine the appropriate final repair.

Smoke inhalation injuries were reported in a March 2019 incident in Belmont, Massachusetts. A Bolt caught fire in the driveway and the owner said strong fumes permeated the home during a three-hour fire requiring professional cleaning. The owners also reported they suffered headaches from contact with the smoke.

Dealerships will update the vehicle’s battery software beginning next week. GM said until owners receive the dealer software update, they should change the charge settings to enable either “Hilltop Reserve” for 2017-18 vehicles or “Target Charge Level” for 2019 model year vehicles. This will limit vehicle charging to 90%.

Last month, Hyundai Motor (KS:) issued a recall for about 75,000 Kona EVs worldwide because of a possible short circuit due to what may be faulty manufacturing of its high-voltage battery cells could pose a fire risk.