Sam LaDuc over at Samantha LaDuc trading out of the Boston area, published this missive on Election Risks and Opportunities over the weekend that is worth the read.

Agree with Sam on , not so much (at least on a longer time frame) in terms of an uncorrelated, defensive trade to a technology correction.

Interesting too that Samantha is talking about rising interest rates. With a Biden victory I think it is less probable than with a Trump victory since a President Biden has already said the Dem’s would work to repeal the 2017 tax cuts and raise tax rates. That is more likely to slow economic growth and put a damper on any recovery, albeit an economic recovery that is expected to be slower into 2021 anyway.

My big worry—from a capital markets perspective—with a President Trump victory, particularly if it’s accompanied by a Congressional mandate is that the President puts the economic pedal to the metal (so to speak) and interest rates rise sharply. Remember (again) the Fed and FOMC only have strict control over the fed funds rate. The rest of the Treasury curve is set by market forces, like inflation.

But there does seem to be some pressure building in the Treasury complex. Here is a chart of the Treasury bond from Briefing.com on the 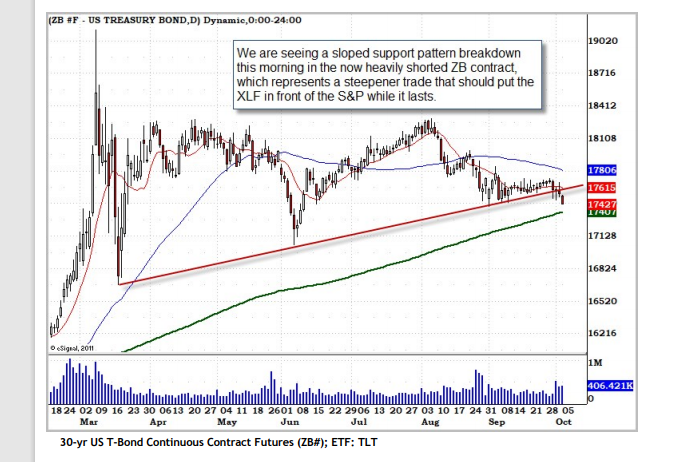 Here is the copy from Briefing.com quoting a Bloomberg article:

“According to a Bloomberg piece out over the weekend, “Fast‐money wagers against longer‐dated Treasuries have hit a record in a sign hedge funds are
positioning themselves ever more aggressively for a steeper yield curve.”

Net short speculative positions in long bond futures saw the biggest weekly climb since 2007 to reach around 209,000 contracts, according to CFTC data.
Meanwhile, net long positions on 10-year Treasuries have risen to their highest since October 2017.

The WSJ also ran a piece titled, “There’s No Place to Hide Anymore When the Stock Market Plunges” which speaks to the same theme, noting:

“This total failure of hedging is unusual, but investors need to get used to the idea that Treasurys no longer provide the ballast for a portfolio.”

This is a rather quick acknowledgement of a dynamic by the mainstream, and gives me some pause about its ability to persist as a market theme. But it
makes sense and matches what we have seen in recent action.

However, the continuation of this dynamic is predicated on some measure of growth. It’s not hard to imagine, but positioning may still have gotten ahead of
itself. That said, it’s certainly working out thus far for newly minted shorts, with bonds already sharply lower on the week.

Summary / conclusion: Some earnings and revenue growth data was going to be added on the Financial sector, but given the drop in the 10-year Treasury this morning, with the now at 74 bps, a post dedicated to worries about rising interest rates made more sense.

A would no doubt help the Financial sector, but I think the 10-year Treasury yield would need to rise over 90 bps to start to make bond investors nervous.

The bond vigilantes haven’t gone away, they’ve just been punched in the teeth repeatedly over the last two decades.

High-yield muni credits typically have a VERY long duration (much longer than corporate high yield) so investors need to at least be aware of this risk. Some taxable client accounts are long Nuveen’s High Yield Municipal Bond ETF (NYSE:) managed by John Miller.

The goal with the bond fund and style allocation is to try and capture as much credit spread as possible on the back of the Fed liquidity bazooka.

How the Presidential election might change this as well as the composition of Congress will be determined in the next few weeks.

I’ve read at least half a dozen articles on the death of 60% / 40% asset allocation in the last two weeks, i.e. the death of the “40%” in terms of a meaningful contributor to the aggregate return. Hopefully more on this later this week. Blackrock’s Rick Rieder had some great tables on the 60/40 conundrum.

Take everything here with great skepticism and doubt. Do your own homework and evaluate all investments in light of your own financial condition.