Those who’ve been following the cryptocurrency space for even a few years will be familiar with Bitcoin’s evolving narrative as it has risen to prominence. Born at the start of the Great Financial Crisis more than a decade ago, it has had a number of changes. It has gone from being a novel form of digital cash with no central authority to an alternative payments and remittances network to a mammoth speculative bubble, and now to potentially a form of digital gold. On its way, it has also reportedly died countless times and been featured in hundreds of obituaries. Lately, however, it seems to be acting as an escape vehicle in a global economy that’s been repeatedly hammered by successive crises.

Too new and untested to play a part in the wake of 2008, by the time the European sovereign debt crisis rolled around four years later it was still largely ahead of its time. This was the time when a second wave of people first came across this strange new form of digital money. At the time, the majority either couldn’t see the difference between a database and a blockchain, and why the latter was so important, or couldn’t understand how something digital could possibly be more secure than something physical. Most disregarded it as nerd money, or put it on their to-do lists and never got round to researching it until it surged to $1200 in November of 2013.

What’s particularly striking about Bitcoin’s rise is that it has primarily been led by retail investors. Ignored by the incumbents it was created to disintermediate, it was treated by the mainstream media as a novelty and only really given column inches and airtime when it found itself the subject of speculative bubbles. The second of these major bubbles occurred in 2017 when, after 4 years of sideways action following 2013’s highs, it went from around $1,000 to $20,000 in the space of a single year.

True to form, after touching those irrationally exuberant highs at the tail end of 2017, it proceeded to drop back down, setting lower-high after lower-high throughout the entirety of 2018, finally bottoming out in mid-December at just over $3,000. 2019 saw the cryptocurrency reclaiming several key support levels to top out just shy of $14,000 in late June and retrace throughout the latter half of the year to close out 2019 at just over $7,000. 2020 would see it heading back up to $10,000, only to have the rug pulled out from under it at the height of the coronavirus crisis. Following the crash in March, it broke below several support levels to trade at around $3800 and, much like the US stock market, has been setting higher-lows and higher-highs ever since.

Investors have long been waiting for institutions to catch on, and even though much has been done in recent years to make the purchase and custody of cryptoassets easier for institutional investors, many in the space believe that now is bitcoin’s moment to finally shine in the institutional space. The past few years have seen developments such as cash-settled CME futures, the publicly traded Grayscale Trust, and deliverable bitcoin futures through the NYSE-owned Bakkt exchange. Add to this, the growing number of cryptocurrency hedge funds such as Polychain Capital, Galaxy Digital and Blocktower Capital, and you have a nascent asset class that is rapidly coming of age.

Prior to 2020, Bitcoin was still outside of the remit for many traditional investors. It operated on the sidelines of the traditional financial world. Offering those with the stomach for its highly volatile swings the promise of outsized returns but also the possibility of huge losses.

However, the events of this past year and the volatility in traditional markets have, in many ways, highlighted the fragilities that bitcoin, as a system, was created to address. Faced by an overbought US stock market sustained by unprecedented monetary largess, a bond market bubble in which yields have fallen to historic lows, and the prospect of trillions more in both monetary and fiscal stimulus, some investors think Bitcoin is now starting to look like one of a tiny handful of safe havens that include precious metals.

A part of the Bitcoin story that often doesn’t get told, is how its very existence has pressed the issue regarding digital currencies. Over the years we’ve seen everyone from the Big Four accounting firms, to corporations like Facebook (NASDAQ:), to the central banks themselves, discussing the viability of digital currencies. This month, the managing director of the IMF made a speech calling for a new Bretton Woods moment. It was closely followed by a paper discussing the cross-border implications of Central Bank Digital Currencies and Global Stable Coins (GSCs), as well as a virtual panel discussion that included Fed Chair Jerome Powell. All this in the same month that China began testing its own digital version of the yuan.

What appears to be taking place are the opening moves of a contest that will eventually see the existing financial system redrawn, and a number of competing interests are all scurrying to claim a seat at the table. Far from replacing cryptocurrencies, these tentative moves towards a digital monetary future are giving Bitcoin and its decentralised, global nature much more credibility. 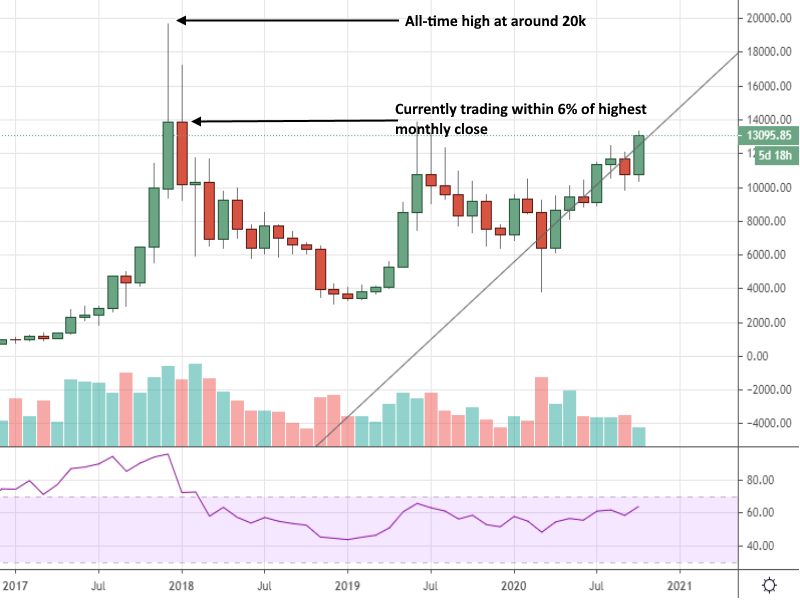 A quick look at the technicals

With so much action taking place at the shorter timeframes, many Bitcoin traders could be forgiven for not even realising that there’s a monthly bitcoin chart to analyse. A quick look at this monthly chart reveals a very interesting setup. Should bitcoin hold at these levels until the end of October, it will book its second-highest monthly close since the all-time high at the end of 2017. Moreover, it has achieved this on lower volumes and, as yet, there are no overbought signals on the monthly chart. If this is indeed the shape of things to come, we could be looking at the start of a year-end rally that could see bitcoin retesting those all-time highs in the next few months.