Hiking Rates Into Peak Valuations Is A Mistake


Hiking rates into a wildly overvalued market is potentially a mistake. So says Bank of America in a recent article.

Optimists expecting the stock market to weather the rate-hike cycle as they’ve done in the past are missing one important detail, according to Bank of America’s strategists.

While U.S. equities saw positive returns during previous periods of rate increases, the key risk this time round is that the Federal Reserve will be “tightening into an overvalued market,” the strategists led by Savita Subramanian wrote in a note.

“The is more expensive ahead of the first rate hike than any other cycle besides 1999-00,” they said.” – Yahoo Finance

While many media experts suggest that investors should not be concerned about rate hikes, BofA makes a very valid point regarding valuations.

Before we get there, we need to review current valuation levels and how we got here.

Valuations are a function of three components:

The price-to-earnings ratio, or the P/E ratio, is the most common visual representation of valuations. However, we tend to forget that ” psychology ” drives investors to overpay for those future earnings.

In other words, while valuations, in the long run, reflect future returns, in the short run, they reflect investor sentiment.

So, back to BofA, how could hiking rates now be problematic for stocks?

Over the last 12-years, the pace of price increases accelerated due to massive fiscal and monetary interventions, extremely low borrowing costs, and unrelenting As shown, the deviation from the exponential growth trend is so extreme it dwarfs the “dot.com” era bubble. 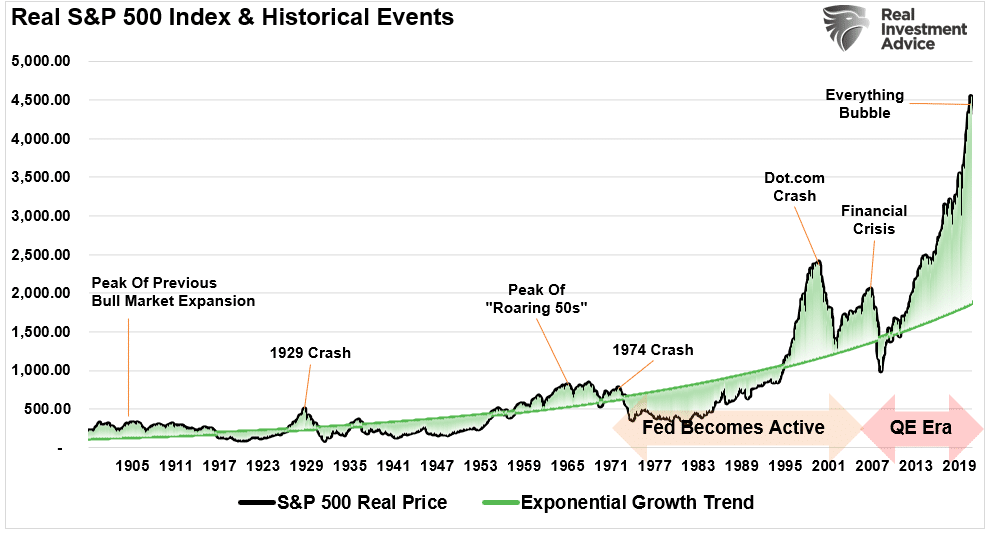 That massive flood of liquidity from the Government checks to households, the Fed’s zero-interest-rate policy, and $120 billion in monthly bond purchases had to go somewhere. Instead, it showed up as inflation in both prices of goods and services and financial assets. Currently, market valuations are more extended than at any other point in history other than the “Dot.com” bubble.

Realigning the data above, we see that valuation extremes are a function of price extremes. 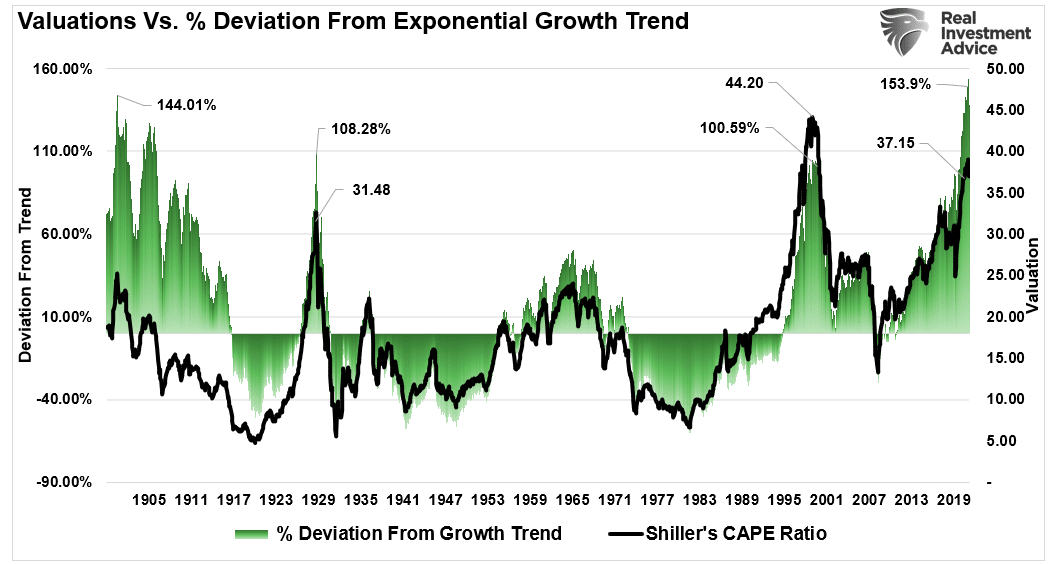 Jerome Powell clearly understands that a decade of monetary infusions and low rates created an asset bubble larger than any other in history. History shows that previous rate hiking cycles, particularly with elevated valuation levels in 1972, 1999, and 2007, led to poor outcomes. 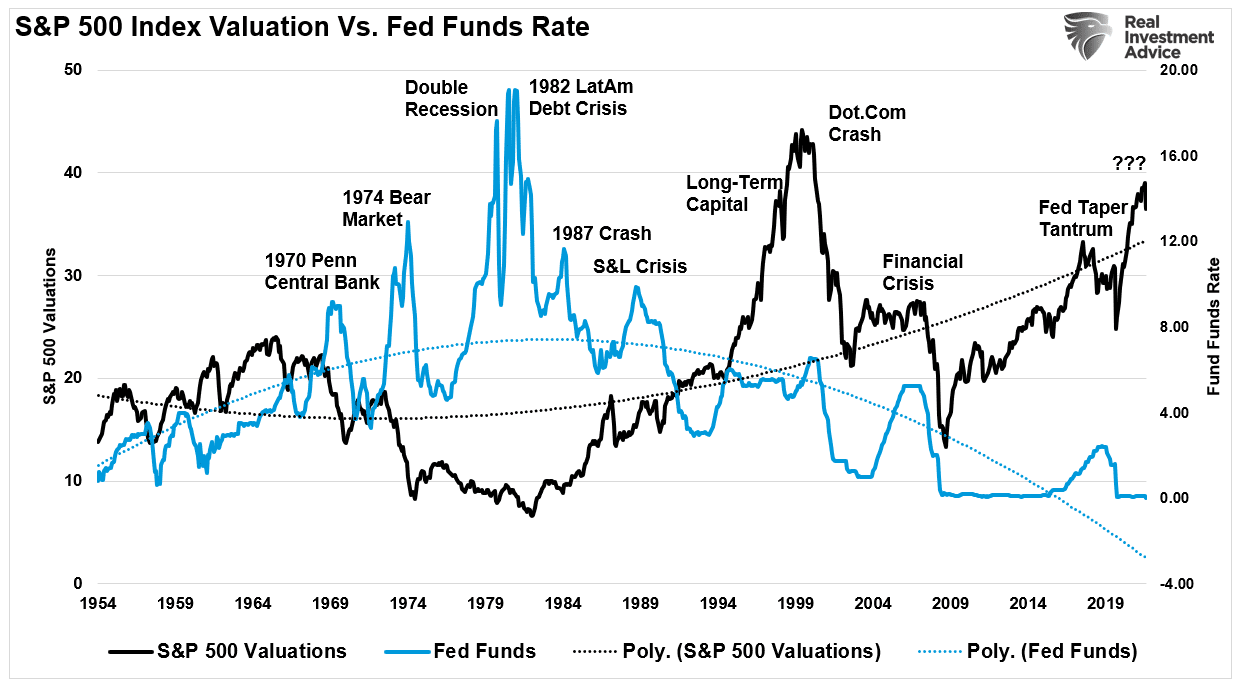 Investors chase stocks on expectations of continued economic and earnings growth, so they risk disappointment. When the Fed tightens monetary policy to slow economic growth and quell inflation, such leads to a reversal in earnings. 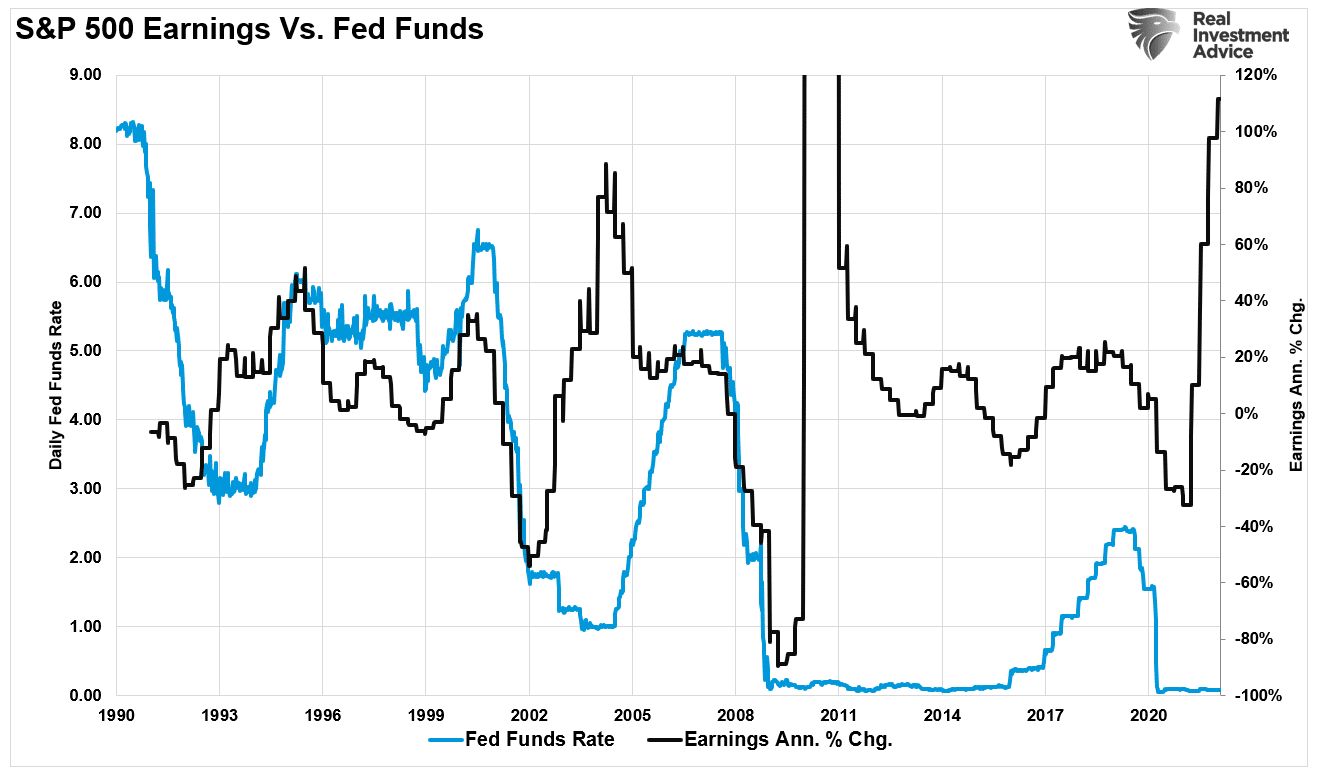 Given already high valuations, the outcome will not be what investors were told to expect.

The Problem Of High Valuations And Forward Returns

For investors, the primary bullish arguments for overpaying for valuation over the last decade was three-fold:

The premise was that with the Fed keeping rates at zero and earnings growth, the present value of future cash flows from equities would rise enough to justify their valuation. Furthermore, the Fed supporting asset prices with massive rounds of Quantitative Easing (QE) investment risk got removed. While true, assuming all else is equal, a falling discount rate does suggest a higher valuation.

Simply, if low-interest rates are bullish for equities, then higher rates can not be. They can’t be both.

As we already know, high valuations lead to low future returns, as noted by 120-years of data. (Data courtesy of Dr. Robert Shiller) 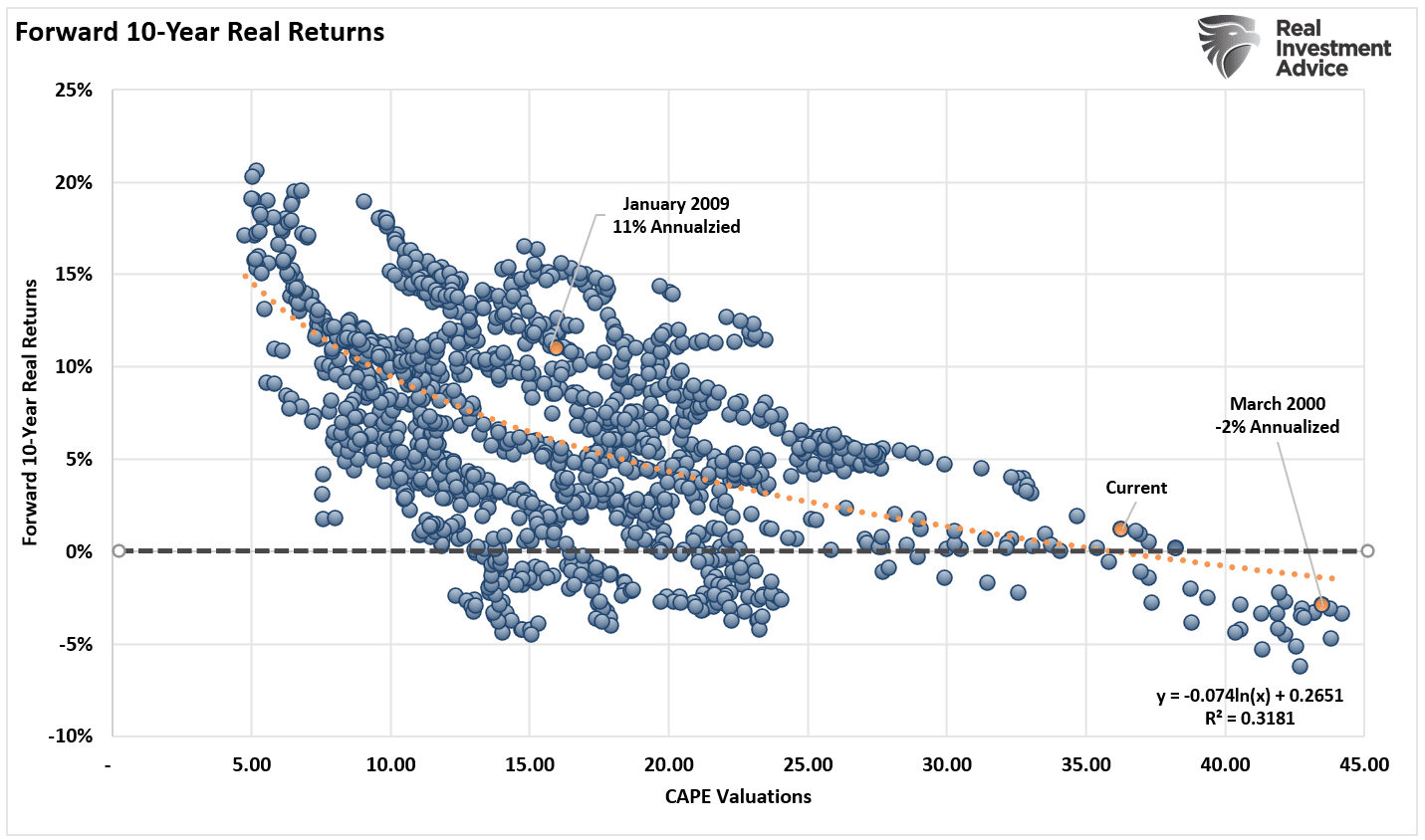 However, logic and data also show that future returns decline when the Federal Reserve hikes rates, particularly in combination with elevated valuations. 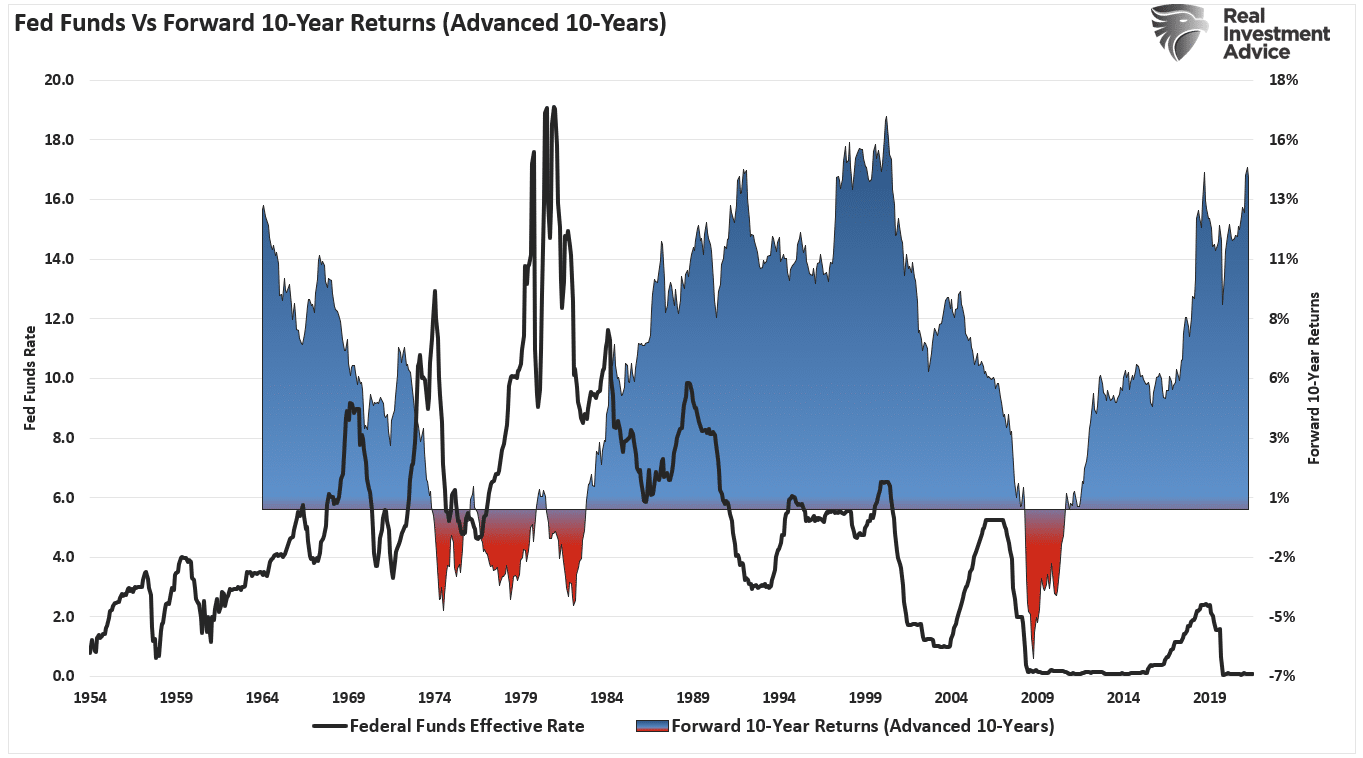 This Time Is Unlikely Different

While market analysts continue to develop a variety of rationalizations to justify high valuations, none of them hold up under objective scrutiny. As noted previously:

“The problem is while Central Bank interventions boost asset prices in the short-term, over the long-term there is an inherently negative impact on economic growth. As such, it leads to the repetitive cycle of monetary policy.

“Through the end of Q2-2021, using quarterly data, the stock market has returned almost 217% from the 2007 peak. Such is more than 7.5x the GDP growth and 3.2x the increase in corporate revenue. (I have used SALES growth in the chart below as it is what happens at the top line of income statements and is not AS subject to manipulation.)“ 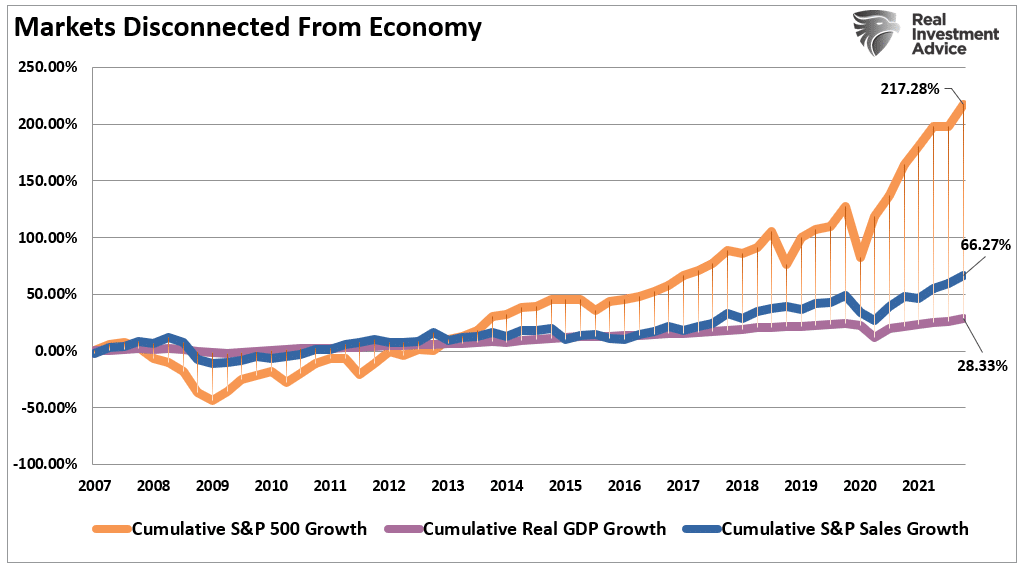 While it is “bullish” to come up with reasons to justify overpaying for assets in the short term, “fighting the Fed” is generally a “no-win” situation.

That means if a massive flood of liquidity, QE, and zero rates was your thesis for overpaying for earnings previously, the reversal of that policy is not.

You don’t get to have it both ways.