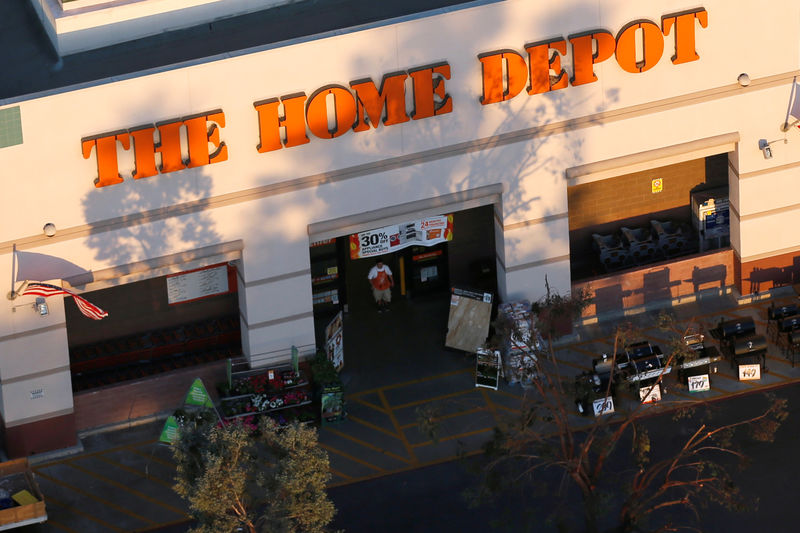 © Reuters. A Home Depot store is seen in Long Beach

(Reuters) – Home Depot Inc (NYSE:) missed Wall Street forecasts for quarterly sales on Tuesday, as a snowy winter prevented many Americans from remodeling home exteriors in a housing market that is slowing on the back of high prices.

Shares of the largest U.S. home improvement retailer fell 3 percent, with losses limited by the promise of $15 billion in share buybacks and a 32 percent boost to its dividend.

Separately, official data on Tuesday showed U.S. housing starts hitting a two-year low in December on falling construction of both single and multi-family housing, a significant source of revenue for Home Depot and smaller rival Lowe’s.

“It was cold, it was snowy, and perhaps worst of all, it was wet,” Home Depot Chief Executive Craig Menear said on a conference call with analysts.

Fourth-quarter sales at U.S. Home Depot outlets open at least for a year rose only 3.7 percent, lagging Wall Street analysts’ forecasts of a 4.5 percent increase, according to IBES data from Refinitiv.

The Atlanta-headquartered retailer also projected full-year earnings below estimates, forecasting $10.03 per share, against expectations of $10.26.

The projections come as Home Depot invests billions of dollars in bolstering its e-commerce operations and store infrastructure as it battles Lowe’s and online stores including Amazon.com Inc (NASDAQ:).

“There are definitely some concerns that Home Depot’s business will come under more pressure as the economy and housing market slow down,” he said.

Shares in Lowe’s, which is scheduled to report quarterly results on Wednesday, fell 0.4 percent in morning trade.