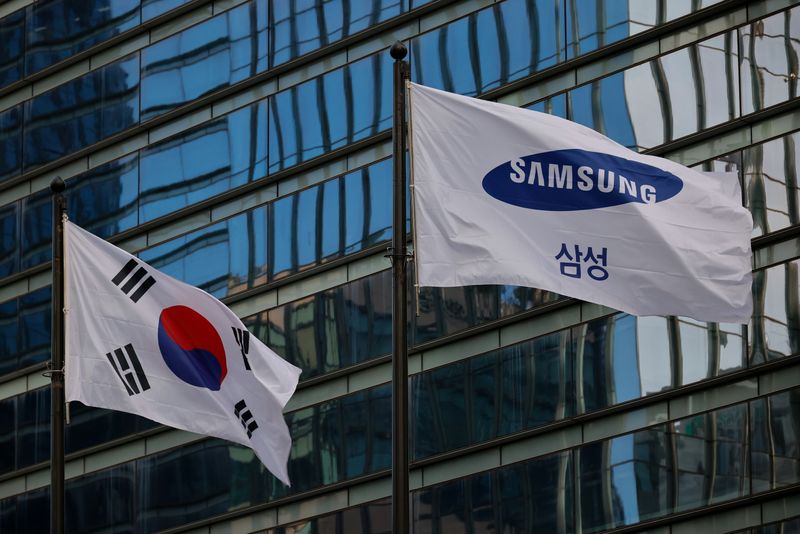 © Reuters. A flag bearing the logo of Samsung flutters in front of its office building in Seoul

By Hyunjoo Jin and Joyce Lee

From the astronomical inheritance tax bill to potential legal obstacles, here are some of the issues the family faces as it seeks to stay on top of the business empire founded back in 1938.

The family is expected to focus on maintaining control of the conglomerate’s crown jewel Samsung Electronics (OTC:) Co Ltd (KS:), but family members’ combined direct stake ownership is only at 5.8%.

Their outsized control is made possible through their shareholding in Samsung Life Insurance (KS:), which holds 8.5% of the flagship chipmaker, and Samsung C&T Corp (KS:), which owns 5%.

The majority of the late chairman’s assets were a 4.18% stake in Samsung Electronics, worth about 15 trillion won ($13.3 billion), which the family is expected to try to inherit entirely.

If the family inherits Lee’s stocks, the total tax bill is estimated to top 10 trillion won ($9 billion). It can be paid in instalments; one-sixth must be paid initially, then the rest over five years, meaning annual payments can exceed $1 billion.

MONEY TO PAY THE TAX

The Lee family can sell their stocks in information service provider Samsung SDS (KS:) and other non-core affiliates to pay the tax.

Dividends totalling about 702 billion won a year from their combined holdings in Samsung affiliates can also be used, which will add up to about 32% of the annual tax bill, according to Choi Nam-kon, an analyst at Yuanta Securities.

The shortfall may have to be covered with loans or partial sales of stakes they hold or will inherit in Samsung Life Insurance and Samsung Electronics.

“The view is that selling part of the stake in Samsung Electronics during the inheritance process may be unavoidable,” said Jeong Dae-ro, analyst at Mirae Asset Daewoo Securities.

Such stake sales could weaken the family’s direct control of Samsung Electronics.

Proposed legislation making it tougher for insurance companies to hold large stakes in non-financial affiliates relative to their assets could force Samsung Life to sell about $20 billion in shares in Samsung Electronics and cripple the Lee’s family’s grip on the chipmaker.

To ensure the Lee family keeps control, Samsung Life may try to sell its stake to Samsung C&T, which would in turn unload stakes in other units to come up with the funds.

The passage of the law remains uncertain as it could be unpopular with retail investors ahead of a presidential election in early 2022.