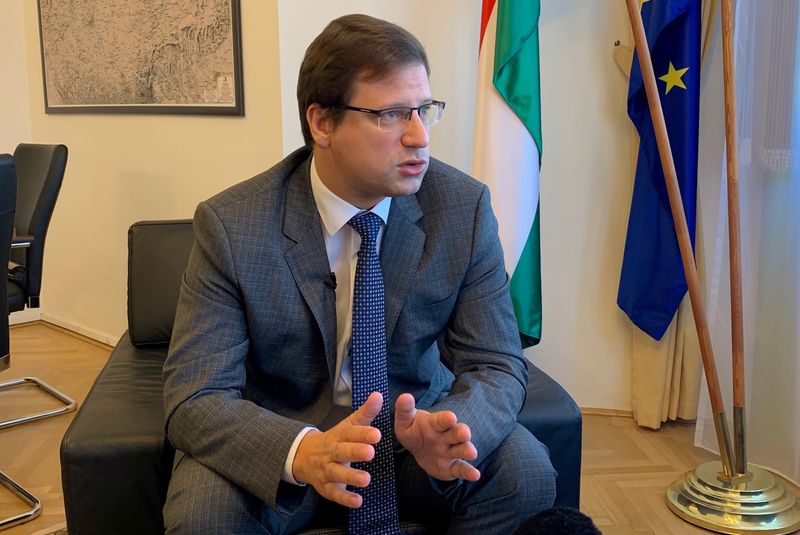 BUDAPEST (Reuters) – Hungary and Poland dug in their heels on Friday in a dispute with the European Union over efforts to link the disbursement of more than a trillion euros of funds with rule-of-law provisions, dashing tentative hopes that a compromise could soon be agreed.

Hungary and Poland have for weeks blocked the release of funds worth a total 1.85 trillion euros ($2.25 trillion) from the EU’s seven-year budget and a post-COVID development fund, cash sorely needed by member states trying to emerge from their coronavirus-induced recession.

Warsaw and Budapest, both under investigation by the EU over their push to curb judicial and media freedoms, object to the bloc’s attempt to make the funds conditional on respect for the rule of law and democratic norms.

EU diplomats had discussed attaching an explanatory declaration to the funding package to make the linkage more acceptable to Budapest and Warsaw, a move initially welcomed by Poland. But on Friday both countries rejected that initiative.

“For us, this solution – attaching some statement like a reminder on a sticky note attached on a piece of paper – won’t work,” Hungarian Prime Minister Viktor Orban told public radio. “Hungary insists that these two things should be separated.”

Orban said there was no rush to get an agreement on the EU budget this year, adding: “Leave the legal status quo unchanged and everything will go smoothly and quickly.”

Polish government spokesman Piotr Muller said on Twitter that Warsaw’s stance on the issue was unchanged.

The chairman of EU leaders, Charles Michel, said on Friday the bloc could not compromise on respect for rule of law, which he said was in its DNA, though he “wanted to remain optimistic” that the standoff can be resolved quickly.

According to a poll by think-tank Median published this week, around half of Hungarian voters accept Orban’s assertion that the EU is using the funds issue to force Hungary to accept more lenient regulations on immigration.

Orban has long accused the EU of being dominated by a liberal mindset that he says aims to dilute national identities and cultures, partly through encouraging mass immigration.

His critics say he has systematically eroded democratic freedoms in Hungary during his decade in power by curbing the independence of the media, NGOs and universities.

Political analysts said Orban may prefer to hold firm in his battle with the EU despite the potential harm to Hungary’ own economy as he seeks to divert voters’ attention from a scandal that hit his ruling conservative Fidesz party.

The party’s leader in the European Parliament, Jozsef Szajer, resigned from the assembly and from Fidesz this week after details emerged of how he had fled a gay sex party in Brussels by clambering down a gutter.

Fidesz has long been accused by LGBT groups of pursuing a homophobic agenda.

“The question is what Orban considers a higher risk,” said Zoltan Novak, an analyst at the Centre for Fair Political Analysis. “The erosion of his government’s reputation because of this lifestyle scandal or the financial risk stemming from the EU budget veto.”

“For now the ‘freedom fighter’ rhetoric still has some mileage left in it, as Orban’s camp seems to like it.” The clocks are ticking down By Reuters