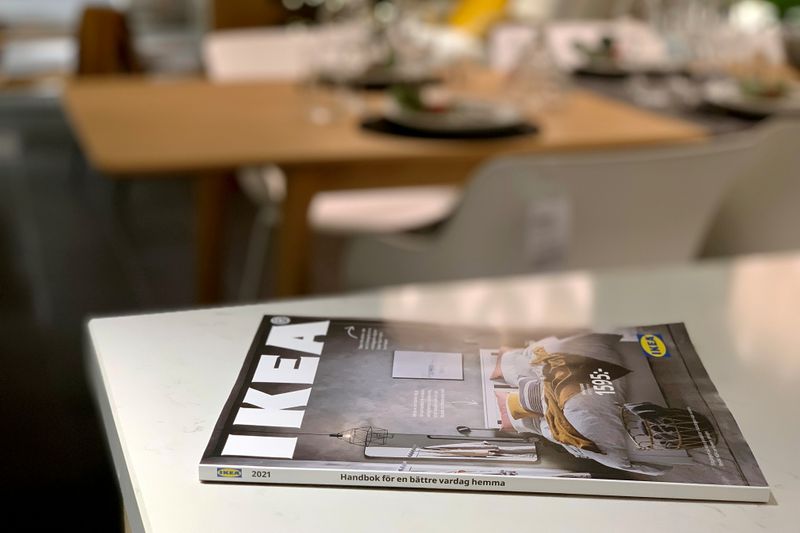 © Reuters. FILE PHOTO: The 2021 catalogue is seen on a showroom kitchen counter at an IKEA store on the outskirts of Stockholm, Sweden December 5, 2020. REUTERS/Anna Ringstrom

STOCKHOLM (Reuters) -IKEA, the world’s biggest furniture brand, is leasing more ships, buying containers and re-routing goods between warehouses as it works hard to mitigate a “perfect storm” of global supply chain disruptions which could last into next year, executives said.

The company, which earlier on Thursday reported record annual sales as locked-down consumers spent more than ever on their homes, is also reducing the number of versions of some products as it struggles with raw materials shortages to ensure its most popular items are available.

“It is re-steering and re-routing. And on the retail side we have learned agility like never before because everyday you have to work with what you have. You have to find ways to solve customer needs with limitations that we have never seen before,” said Jesper Brodin, CEO of Ingka Group which owns most IKEA stores.

Jon Abrahamsson, chief executive at brand owner Inter IKEA, told Reuters he expects the supply chain crisis to continue into 2022, with the biggest challenge currently to get goods out of China, where roughly a quarter of IKEA’s products are made.

IKEA’s stores in North America are the hardest hit by product shortages, followed by Europe. To avoid disappointing shoppers, it is temporarily removing unavailable products from its websites and store showrooms, instead suggesting similar items.

Brodin said no-one at IKEA had anticipated the current global supply chain crisis, and that there would need to be a preparedness in future for unexpected swings in supply.

“It’s a perfect storm. (But) I think we are way past being surprised. This is the new normal for us. And when things stabilise we will have learned so much about agility and about sales steering,” he said.

A large share of IKEA’s range is sourced relatively close to sales markets. Around 70% of products sold in Europe, where IKEA has the bulk of turnover, are produced on the continent.

Inter IKEA said sales of products and services at all IKEA stores and online totalled 41.9 billion euros ($48.7 billion) in the fiscal year to end-August, up 6% from the previous year and 1% from pre-pandemic fiscal 2019. E-commerce grew by 73% to account for 26% of total retail sales.

“All over the world interest in life at home has become bigger,” Brodin said. “There is no sign of decline in demand in any of our areas as it is right now,”

On the current fiscal year, Brodin said he believed demand would remain high. “It is also be a matter of how we manage to be agile across the whole value chain… I’m truly optimistic we have a good, strong year ahead of us.”

He added that a new IKEA store, currently under construction, would open in a central Stockholm shopping mall this year.