Inflation Has Permeated Macro Markets – Where To From Here?


The media present inflation as this guy picking out higher priced fruit. Wait til he gets to the meat department! 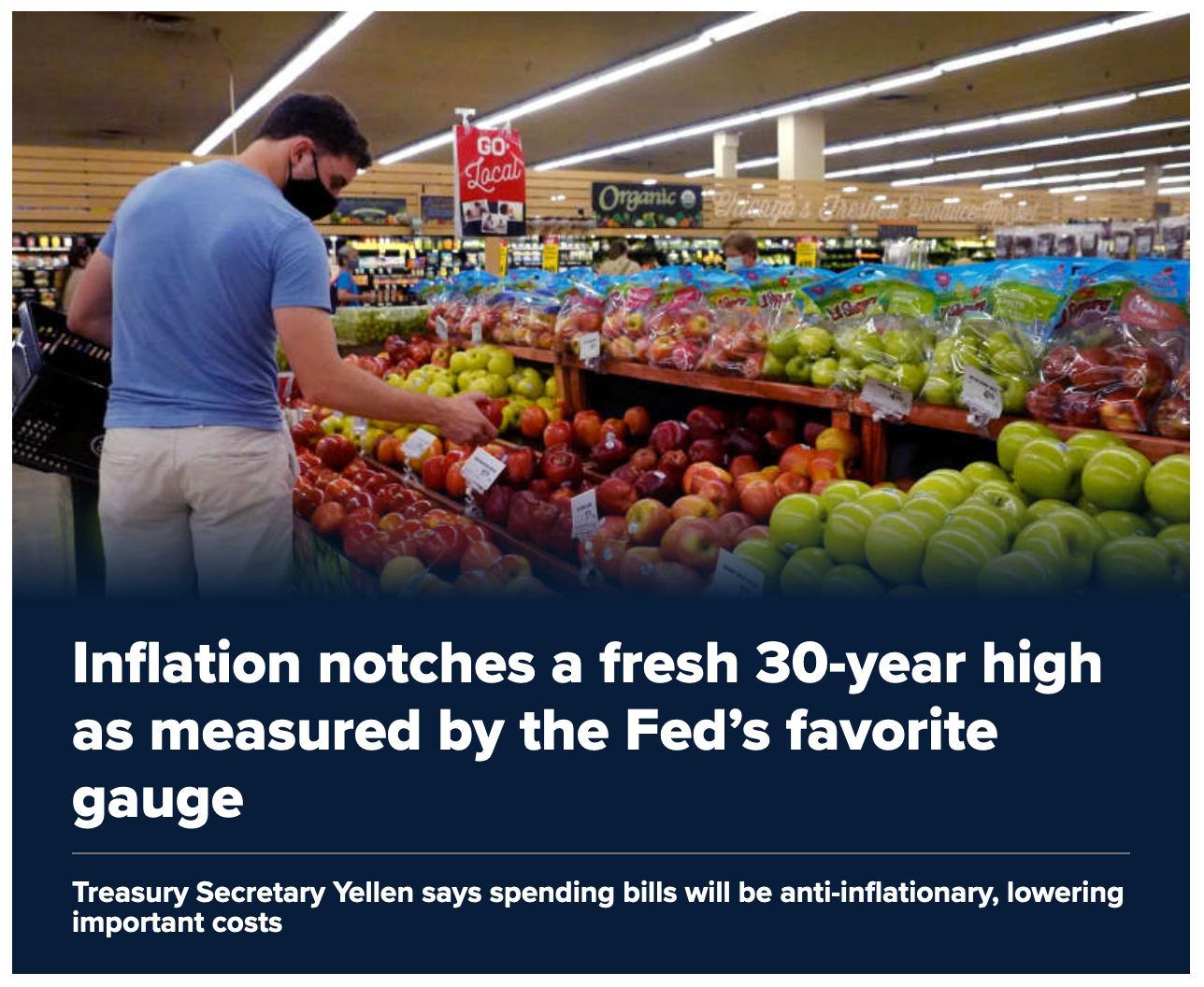 Meanwhile, the Biden administration’s Minister of (financial) Information, Janet Yellen, informs us that all that cost-pushed inflation about to be shoved into the economy is actually going to be anti-inflationary as it actually lowers some costs (in Wonderland anything is possible).

Speaking from Rome, she insisted that “what this package will do is lower some of the most important costs, what they pay for health care, for child care. It’s anti-inflationary in that sense as well.”

OK, those are noble goals. But Janet please, in order to be completely transparent you must rephrase thusly:

“What this package will do is lower some of the most important costs, what they pay for health care, for child care. We are taking the inflation already created (printed) by the Federal Reserve, which added more monetary units per finite assets, services, basic goods and human resources and we have selected within that our favored areas for benefit. Then you see, we are able to tout the wonderful things we are doing for specific beneficiaries while the inevitable tax is shoved (cost-pushed) into the general economy and the population at large pays the price of this beneficial action to specific areas. So come to think of it, let me just say that we are sweeping inflation under the rug here and delivering it there. It’s really a zero sum game but do you want me to say publicly? OK, we’re all screwed and the Fed is putting itself in a box; a dangerously small box.“

And speaking of a boxed in Fed, let’s remember two things:

Here is the first inkling that the cool down was coming last spring, unwittingly provided by Zero Hedge.

That indicator, as usual in the NFTRH financial world view, is the simple monthly chart of the 30-year Treasury yield continuum. The brief history of our analysis for 2021 with respect to this chart has been as follows: 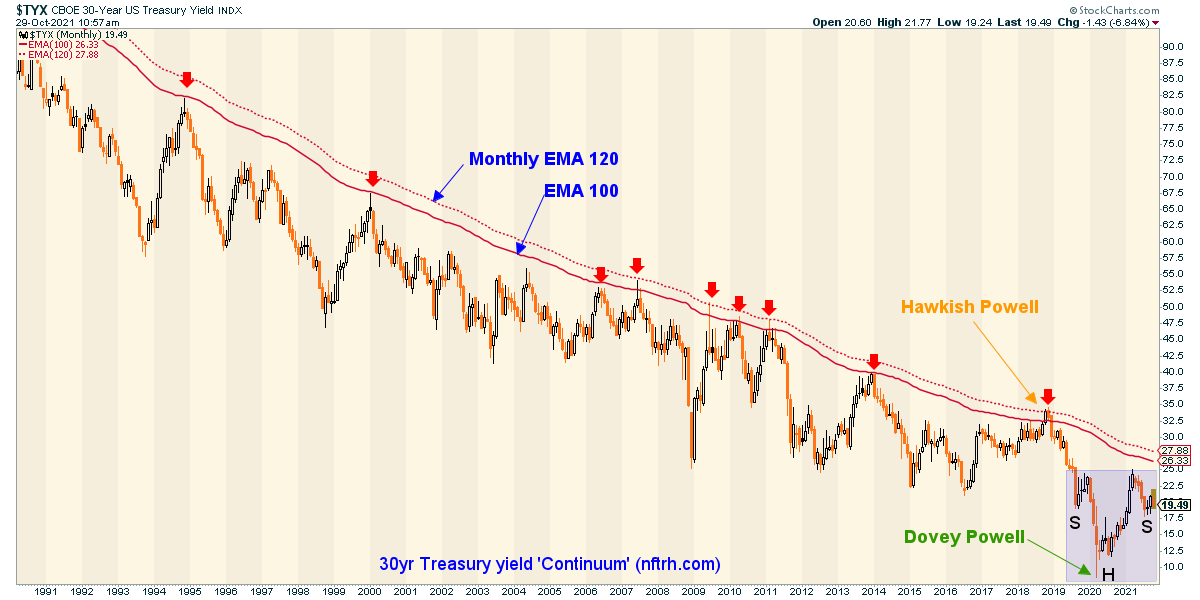 And here we are with a theoretical inverted head-and-shoulders pattern in the making that would set the yield up for a test of the EMA 100 and/or 120 (red lines), which have limited all such inflationary phases over several decades. But we are also at a new and much more abrupt cool down point. This cool down point may well serve to temporarily back the Fed off a bit from its turn toward being sterner on inflation in recent weeks.

Assuming a continuation of the inflationary macro in the near-term (see chart below for the support area to that notion), at the red limiters on the chart above there is a decision with these possibilities (listed in order of probability, with 1 & 2 at nearly even odds in my opinion).

‘But Gary, that is just one chart of one long-term Treasury yield you are trying to use as a one-size-fits-all macro projection!’

Right you are dear imaginary critic.

So let’s note just one of several other ways of gauging inflation. Today, on let’s call it Inflation Hysterics Friday, the Inflation Expectations ETF is tanking to an important support area. The monthly chart above is all well and good for the big picture view, but this picture tells us that the inflation trades are intact but getting a hell of a good test, conveniently with FOMC meeting next week. I have long viewed the Fed as a cynical and self-conscious entity with respect to the inflation it routinely manufactures. This pullback could help the committee maintain some appearance of credibility. 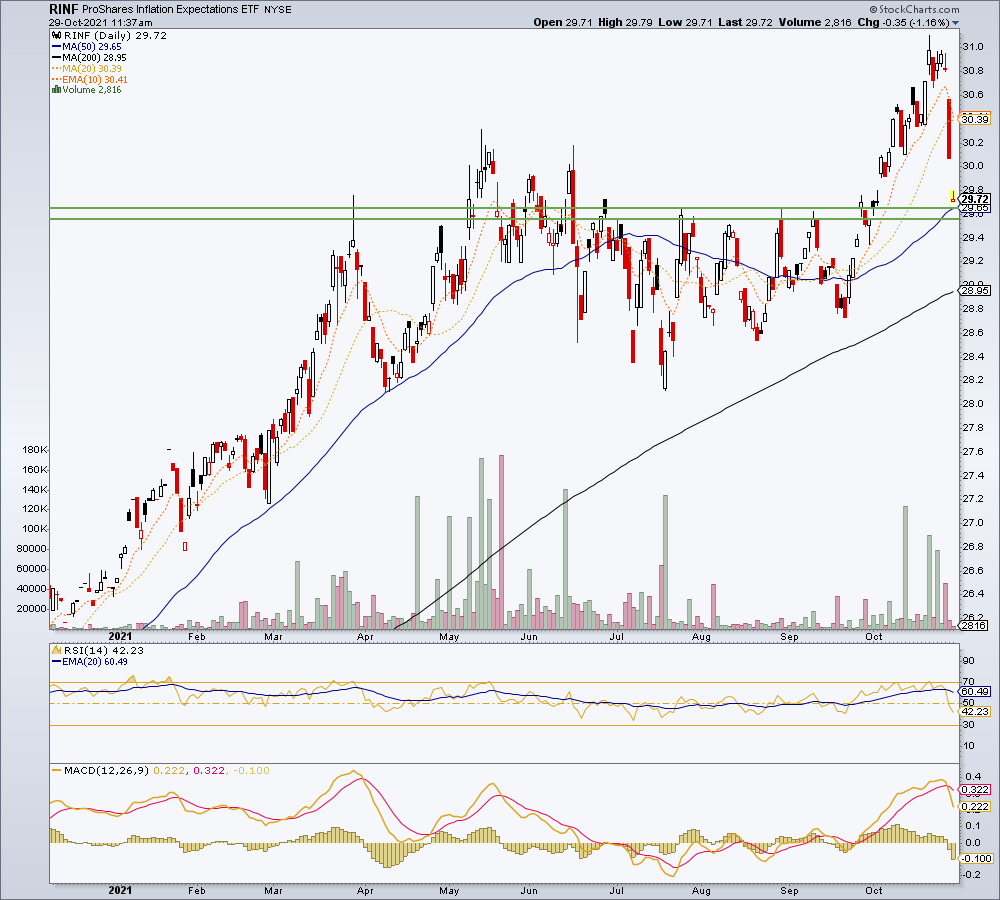 If you think that is just a chart with limited meaning for your inflation trades, think again. As we note nearly every week in NFTRH, RINF and the CRB index go in lockstep. There is no one without the other.

Here is the chart that often appears in the commodities segment for your consideration. It ain’t broke ’til it’s broke, but right minded market participants are staying open to all possibilities from here on and, hopefully, tuning out the media as well. I look forward to managing the process ever more closely each week in NFTRH. It’s what separates effective speculators and risk managers from the herd. 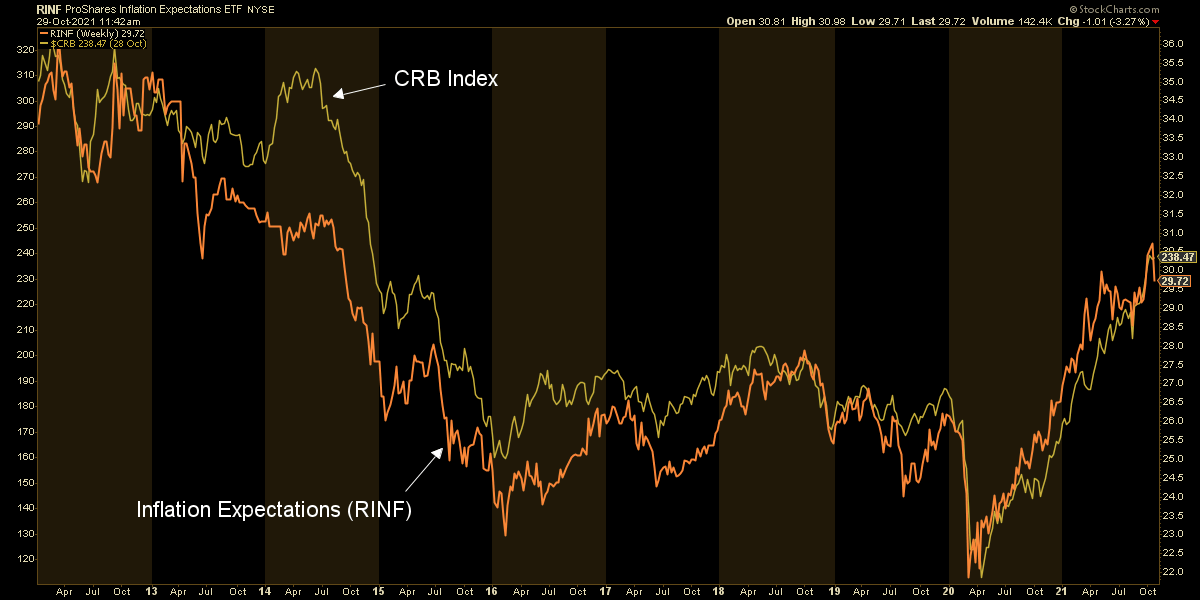