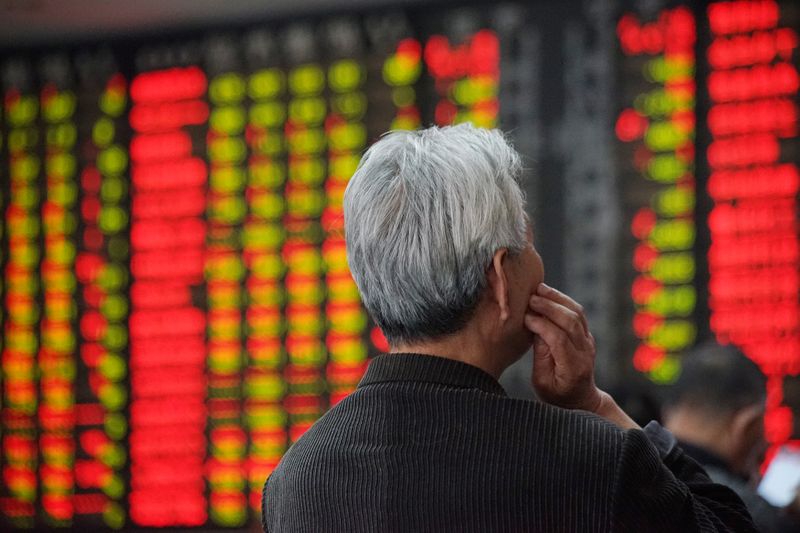 © Reuters. An investor looks at an electronic board showing stock information at a brokerage house in Nanjing

By Andrew Galbraith and Tom Westbrook

SHANGHAI/SINGAPORE (Reuters) – The shock suspension of Ant Group’s massive share offering and a possible Joe Biden U.S. presidency have become fresh tailwinds for China’s stock market, as investors rush to snap up a piece of an economy recovering rapidly from the coronavirus pandemic.

As trillions of dollars locked up by the IPO return to the market, investors searching for a place to park that cash have lifted Chinese e-commerce firms such as Meituan (HK:) and JD (NASDAQ:).com (HK:) to record highs this week.

Even after losses on Friday, the TECH index () was up 8.2% for the week, its biggest weekly gain since early July.

Sean Taylor, chief investment officer in Asia for German asset manager DWS, said the IPO’s collapse was stunning, but the scramble to subscribe showed the depth of Asia’s investor pool.

“It shows there is a huge, huge demand for buying equities when they think they’ve got upside. I expect some of that money goes back into markets,” he said.

“The IPO pipeline looks pretty healthy and the equity culture is growing…and that’s a big thing.”

These investors were net sellers in August and September and made only tiny purchases in October through the Stock Connect scheme, which gives offshore investors access to shares of Chinese firms traded on the mainland.

Early indications that Democratic candidate Joe Biden could unseat incumbent Donald Trump have also pushed the yuan and stocks up.

Biden is expected to take a less confrontational approach to Sino-U.S. relations if elected, removing a drag on Chinese shares that have nonetheless outperformed their peers this year as the world’s No.2 economy recovers.

China’s A-share market welcomed 325 new listings worth a record 542.5 billion yuan in the first 10 months of 2020, more than triple the value of new listings in the same period a year earlier, Shenwan Hongyuan Securities analysts said in a report.

“The speed is…too high and there’s not enough fresh money flowing to the market,” Shen said. “Everything depends on the money flow direction for this market.”