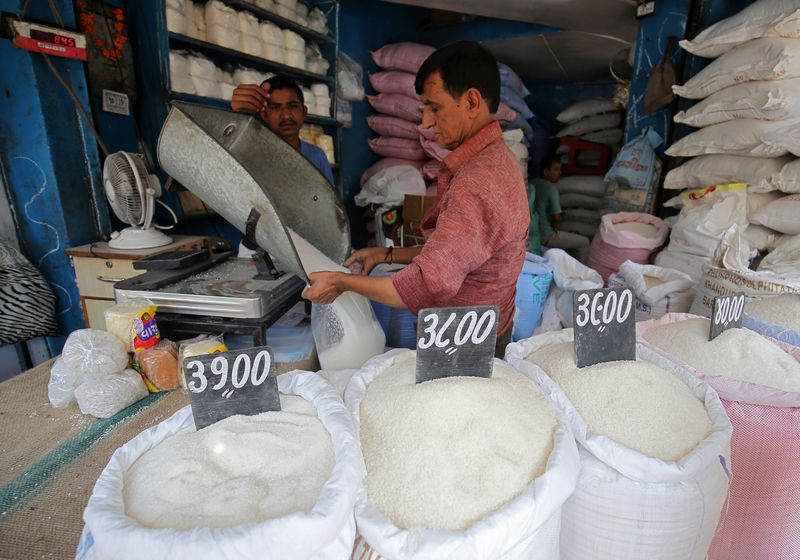 © Reuters. FILE PHOTO: A man packs sugar for sale inside a shop at a marketplace in Ahmedabad

Under the sanctions, Iran is blocked from the global financial system, including using U.S. dollars to transact its oil sales. Iran agreed to sell oil to India in exchange for rupees but it can only use those rupees to buy Indian goods, mainly items it cannot produce domestically.

Trading houses have contracted to export 150,000 tonnes of raw sugar for shipments arriving in March and April at $305 to $310 per tonne on a free-on-board basis, the trade sources told Reuters this week.

“Oil payments have piled up in UCO Bank. Iran is keen to utilize the payments to buy sugar and other food items,” said one of the sources, a Mumbai-based dealer with a global agricultural trading firm, who asked not to be identified as he was not authorized to speak to media.

Cargill, Bunge and other global traders have halted food supply deals with Iran because the new U.S. sanctions have disrupted the banking systems used to settle payments, industry and Iranian government sources said in December.

Iran is paying a premium of as much as $7 per tonne compared to other buyers as traders are anticipating a risk of a delay in payments, said a third source, also based in Mumbai, who did not want to be identified because of the sensitive nature of the U.S. sanctions.

The exports will help reduce swelling sugar inventories in India, the world’s second-biggest sugar producer, but could weigh on global prices that have risen 8.9 percent so far in 2019 to 13.1 cents per pound as of Monday.