Is Apple A Buy After The Stock’s 20% Plunge?


Apple’s (NASDAQ:) stock is having a rough ride these days. Shares of the iconic iPhone maker are down about 20% from their peak, having closed yesterday at $108.77. The stock reached a 52-week closing high of $134.80 on Sept. 1, but is now underperforming shares of other mega cap tech companies. 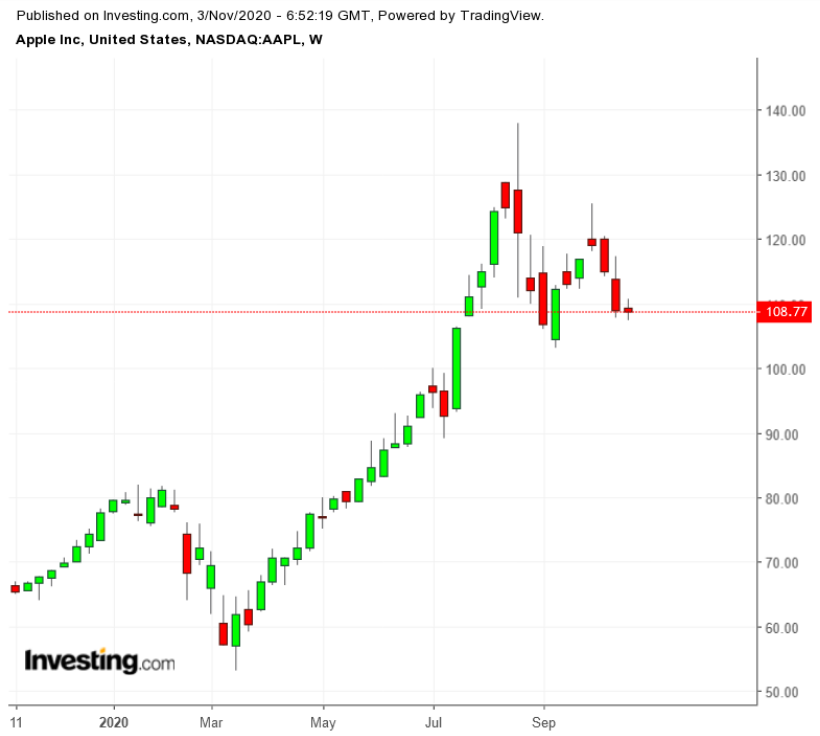 This two-month bearish spell occurs after Apple became the first American company to surpass $2 trillion in market capitalization in August. Since then, it has lost $450 billion in value as investors dumped shares of the Cupertino, California-based technology giant. Apple is now worth $1.85 trillion, still the most valuable U.S. company.

Though the uncertainty related to the U.S. Presidential race and powerful coronavirus resurgence played their role in this slump, investors are also becoming more nervous about Apple’s valuation after the stock’s potent rally since the pandemic-induced slump in March.

The stock fell as much as 6.4% during intraday trade on Friday after the company that disappointed some investors. It finished the week down more than 5.6%.

After a drop of this magnitude, the temptation to “buy on the dip” is difficult for some investors to resist, especially when this strategy has paid off repeatedly. Even after incorporating the latest sell-off, Apple stock has returned 260% during the past five years, including dividends.

That being said, there are clearly some short-term headwinds hurting Apple’s stock and, in our view, there is more weakness to come before the shares bounce back. Here are the factors we believe are in play:

The company’s latest earnings report showed that Apple is struggling to sell more iPhones—crucial to meeting analysts’ current bullish forecasts. Sales of the company’s best-selling product fell 21% during the company’s fiscal fourth-quarter as the pandemic disrupted the global supply chain, delaying the release of newer models.

Apple generally introduces new iPhones models in September, giving its Q4 sales a considerable boost. This year, the 5G-enabled phones went on sale after Oct. 15, while the iPhone 12 mini and the iPhone 12 Pro Max are only becoming available for pre-order this week.

If Apple is able to revive iPhone growth in the current quarter, it will vindicate the bullish narrative of some analysts, who believe that competitive pricing on the new models, the first major redesign in three years and the attraction of faster speed could prompt users to upgrade their phones. As Bernstein analyst Toni Sacconaghi wrote in a recent note:

“The punchline is simple: iPhone revenues have to grow double digits YoY in FY Q1, or March needs to be dramatically stronger than seasonal for this cycle to have a shot of being the super cycle buyside investors appear to be anticipating,”

With iPhones sales remaining weak, investors are also becoming nervous as growth in greater China, one of the company’s most important regions, is faltering. Revenue from Asia fell 29% during the last quarter, the lowest since 2014.

Apple’s first 5G-enabled handset is a late entry in China, where local brands have long offered a suite of 5G-ready gadgets. “A crucial battle for Apple is in the premium smartphone market Apple once ruled before losing ground to Huawei Technologies Co. in recent years,” according to recent analysis in the Wall Street Journal.

Despite these challenges, Apple executives remain optimistic that the company is on track to achieve its targets. Luca Maestri, Apple’s chief financial officer told Bloomberg Television that he expects the iPhone 12 Pro Max with its larger screen to do “incredibly well” in the region and that the company is confident about growing there in the December quarter.

There is little doubt that weakness in iPhone sales is the biggest factor negatively affecting Apple shares. Any potential rebound in sales is very much dependent upon the path the COVID-19 pandemic takes from here and how deeply it hurts the global economy.

That said, Apple continues to remain our favorite long-term pick due to resilience in the company’s other businesses due to its ongoing and its impressive innovation capabilities.