Is The Slide In Treasury Yields Over?


Predicting the end of the secular decline in interest rates has been a hardy perennial—and perennially wrong. Given this history, any observer of bond yields must be wary of declaring that a 40-year trend has reached its end.

Nothing lasts forever, of course, and so it’s conceivable that at some point the decline and fall of interest rates will reach a finale. But speculating on whether that day is next week, next year or 20 years hence is one of the great challenges of finance in the 21st century.

In the current climate it’s reasonable to assume that the thud that, at some point, will mark the bottom is nowhere on the near-term horizon. But the possibility, however far-fetched, presents itself anew in recent weeks via market data and so it’s useful to review the numbers in search of fresh perspective.

Perhaps there’s some nugget of insight that will reveal what the financial gods have in mind for the next phase of Treasury yields. That’s probably asking too much, but it never hurts to review current conditions for the global economy’s crucial arbiter of the price of money.

Let’s start with a recap of the benchmark Treasury yield After dropping sharply during the coronavirus market crash in March, the 10-year rate has been trading in a tight range of roughly 0.5% to 0.9%.

Bond bears are worked up over the yield’s latest upside bias. The 10-year rate ticked above its 200-day moving average yesterday (Oct. 29), based on daily data published by Treausry.gov. A similar if fractional breach was record last week. Before that, you have to go back to late-2019 to find the benchmark rate above its 200-day mean. 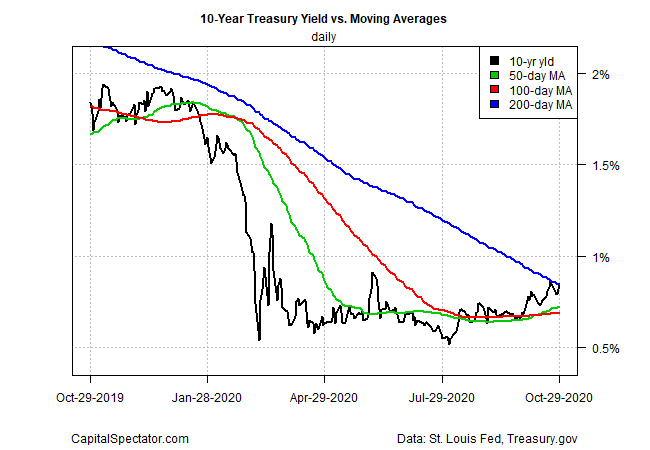 Is this the start of an extended upside bias for the 10-year yield? If only we knew, but the odds will improve, if only slightly, if the rate can extend and hold above the 200-day average in the days and weeks ahead. Meantime, the 50-day average is now above the 100-day mark and so it appears that the case for higher rates, if only on the margin for the immediate future, looks plausible.

Treasury bulls counter that with a rebound in US coronavirus cases in full swing (new reported cases rose to a record high for Oct. 29), it’s premature to dismiss the staying power of the risk-off trade. By that reasoning, the recent uptick in the 10-year rate is noise. If so, the rebound in rates will soon hit a wall and the downside bias will be reanimated anew.

On that note, consider the Treasury market’s implied forecast of inflation, based on the yield spread for nominal less inflation-indexed Treasuries. Inflation, of course, is a critical factor that drives interest rates and so it’s no trivial observation that the market’s outlook has fully recovered from the sharp drop during the coronavirus crash. Yet there’s been no follow-through. As the next chart below shows, the market’s inflation forecast is basically holding steady at pre-pandemic levels. For the moment, the crowd is pricing in an extension of the low-flation regime. In turn, expecting interest rates to rise on the basis of a new, muscular run of reflation still looks like a long shot, or so this Treasury rate spread suggests. 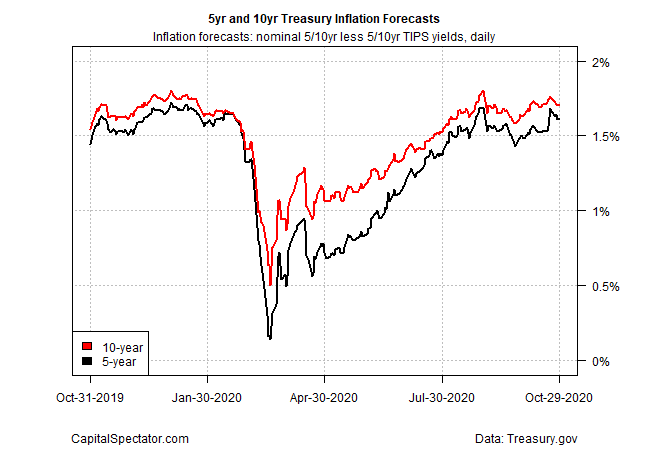 On the other hand, the recent steepening of the yield curve implies that the reflation trade can’t be fully dismissed. The spreads on the 10-year less its and counterparts have been steadily rising in recent months. This could be nothing more than a rebound from the excesses of the coronavirus crash, but if the spreads approach/rise above 1 percentage point it’s going to be a lot tougher to dismiss a reflation forecast. 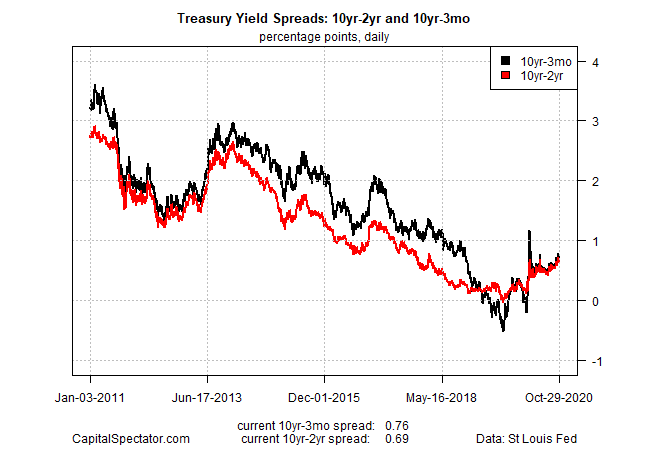 The acid test, as usual, is the economy. On that front, yesterday’s stunningly positive report for the third quarter reflects a V recovery for the summer. It’s not obvious, however, that the strong bounce is spilling over into Q4. 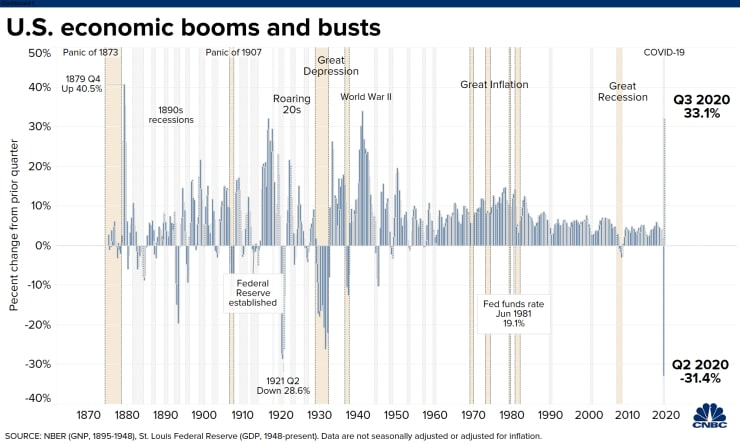 US Economic Booms And Busts

“There’s still a lot of work to do here and the pace of improvement … is going to slow. The stimulus programs that provided much of the economic lift last quarter have expired or are expiring. Fiscal support is diminishing. That is part of the reason that the pace of growth is going to slow from here.”

“The reason we had such a big bounce is that the economy went from closed to partially open,” advises Michelle Meyer, head of US economics at Bank of America. “The easy growth was exhausted, and now the hard work has to be done in terms of fully healing.”

Treasury yields appear to be poised to price in more recovery news, but the economic outlook remains unusually cloudy due to coronavirus, which appears to be mounting a new phase of threatening behavior for the months ahead.

An effective vaccine would be a silver bullet, but that happy day is not yet on the immediate horizon. Perhaps in early 2021, health experts say.

Meantime, the 10-year rate is tentatively pricing in firmer economic activity and perhaps a touch more inflation. But as long as coronavirus is raging in the US, Europe and beyond, expecting a sustainable rise in yields remains highly speculative. Until economic data tells us otherwise, the most compelling forecast for rates remains more of the same: range-bound trading with occasional spikes and declines that reflect sound and fury but ultimately signify nothing.