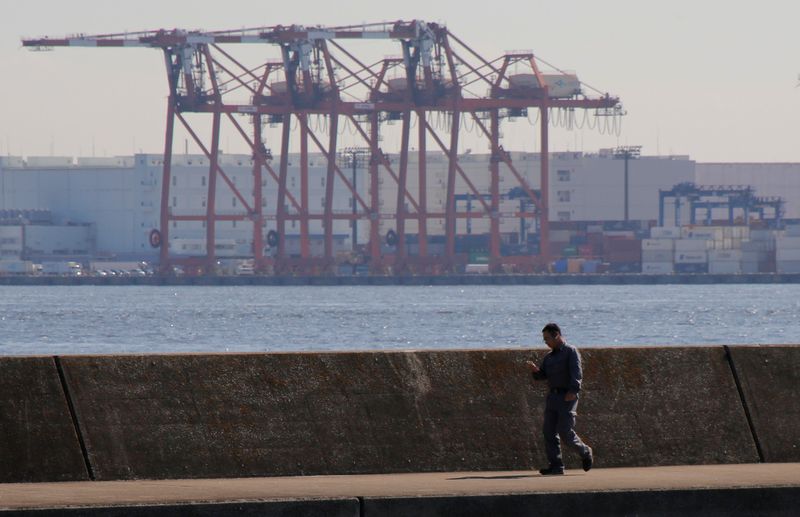 © Reuters. Men are seen in front of containers and cranes at an industrial port in Tokyo

TOKYO (Reuters) – Business sentiment of Japanese manufacturers and service-sector firms was the least pessimistic in nine months in November, likely as the world’s third-largest economy showed signs of pulling out of a coronavirus-induced recession, a Reuters poll showed on Monday.

But both sectors believed conditions will remain negative over the coming months, highlighting the struggle to completely shake off the drag from COVID-19, according to the monthly Reuters Tankan, which tracks the Bank of Japan’s (BOJ) closely watched tankan quarterly survey.

In the poll of 485 large- and mid-sized companies, in which 225 firms responded on condition of anonymity, many complained about the pandemic’s lingering impact, and negative comments about business conditions outnumbered positive ones.

“Conditions haven’t returned to what they were before the coronavirus pandemic,” a manager at a textile maker said in the survey.

The result underscores the challenge Prime Minister Yoshihide Suga faces in boosting domestic demand to assure an economic recovery while keeping the spread of the virus in check.

Suga is expected to announce this month a plan for fresh stimulus to boost activity, government and ruling party sources have told Reuters.

The Reuters Tankan sentiment index for manufacturers showed a marked improvement in November, rising to minus 13 from minus 26 in the previous month. But the index remained in negative territory for a 16th straight month.

The service-sector index was also minus 13, up from minus 16 in October, with sentiment among wholesalers weighing on broad business confidence.

The Reuters Tankan index readings are derived by subtracting the percentage of respondents who say conditions are poor from those who say they are good. A negative reading means that pessimists outnumber optimists.

The results meant both indexes came in at their least pessimistic since February.

The BOJ cut its economic growth and inflation forecasts for the current fiscal year and offered a brighter view on the recovery outlook at its policy meeting last month, signalling that it has done enough on the stimulus front for now.

But it also warned the outlook was highly uncertain as the pandemic weighs on service-sector spending and a resurgence of infections in Europe dampen prospects for a sustained global recovery.

In the Reuters Tankan survey, a manager at a machinery maker wrote: “The semiconductor memory market, which had been strong so far, has slowed down somewhat.”

Manufacturers’ sentiment was seen recovering further to minus 8 in February, while that of service-sector firms was expected to remain unchanged at minus 13.