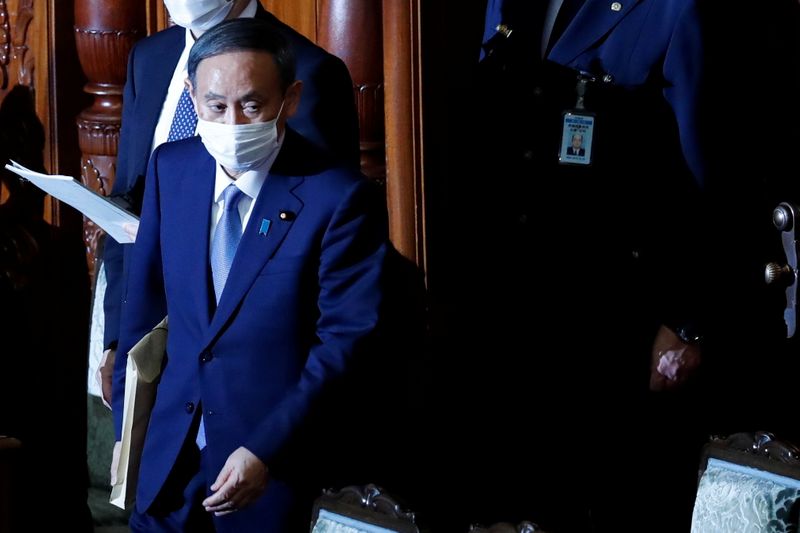 By Yoshifumi Takemoto and Daniel Leussink

TOKYO (Reuters) – Japanese Prime Minister Yoshihide Suga instructed his cabinet on Tuesday to compile a package of stimulus measures to revitalise an economy hit by the coronavirus pandemic, the country’s economy minister said.

The package aims to cushion the blow from COVID-19, assist structural changes in the economy and boost productivity through digitalisation, Economy Minister Yasutoshi Nishimura told a news conference after a regular cabinet meeting.

“We’ll want to consider government spending that will attract private investment,” Nishimura said, adding the government will compile the package as soon as possible.

Japan’s economy is expected to have rebounded in the third quarter after posting a record postwar contraction in the preceding three-month period, when a nationwide state of emergency over the pandemic paralysed economic activity.

Stronger exports and output thanks to a pickup in overseas demand have helped the recovery, but weak capital investment and household spending have kept policymakers under pressure to further boost fiscal and monetary support.

“There’s no choice but to balance the prevention of the virus and economic growth.”

Nishimura said the stimulus measures will focus on shifting to a “green” society, after the government pledged to cut greenhouse gases to zero by 2050 and realise a carbon-neutral society.

While Nishimura said the size of the new package had not been decided, ruling party lawmakers have called for between 10 trillion yen and 30 trillion yen ($95 billion to $286 billion) in new measures.

Nishimura highlighted the country’s negative output gap – which occurs when actual output is less than the economy’s full capacity – saying it stood at about 55 trillion yen, in second quarter.

Japan has already deployed a combined $2.2 trillion in two stimulus packages in response to the health crisis, including cash payments to households and small business loans.

However, some analysts worry lavish spending could further strain the nation’s public finances, which are already the industrial world’s heaviest at more than twice the size of Japan’s $4.6 trillion economy.

“The additional budget should be spent on selected areas where necessary, rather than cash handouts to everyone that the government did previously,” said Yusuke Shimoda, senior economist at Japan Research Institute.