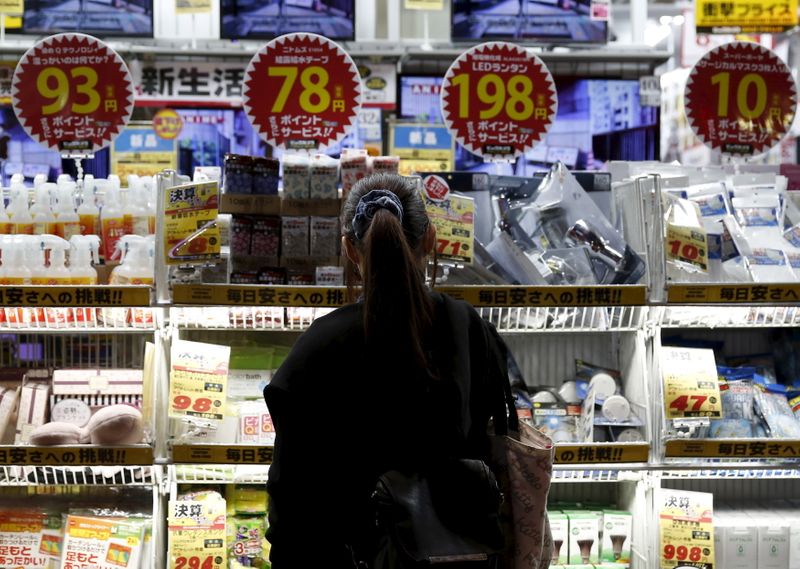 © Reuters. A woman looks at items outside an outlet store at a shopping district in Tokyo

The data is likely to heighten expectations the Bank of Japan (BOJ) will maintain its massive stimulus programme to cushion the economic blow from the pandemic, analysts said.

But analysts mainly blamed the drop on a government campaign aimed at promoting domestic travel, underscoring the tricky task of supporting the economy without pushing inflation further away from the central bank’s 2% target.

“Weak service-sector demand could exert further downward pressure on prices at least until the coronavirus is contained.”

The nationwide core consumer price index (CPI), which excludes volatile fresh food but includes energy, fell 0.3% in September from a year earlier, government data showed on Friday. That compared with a median market forecast for a 0.4% decline.

When stripping away the effect of the government’s travel discount campaign, core consumer prices were flat in September from a year earlier, the data showed.

The data will be among factors the BOJ will scrutinise at next week’s rate review. People familiar with BOJ thinking have told Reuters the bank is likely to slash its economic and price forecasts for the current fiscal year.

Japan’s economy suffered its biggest postwar slump in the second quarter of the year, and analysts expect any rebound to be modest due to soft consumption and capital spending.

While demand for durable goods is picking up, social distancing policies and fears over a resurgence in infections continue to weigh on service consumption.

As part of efforts to rescue Japan’s ailing tourism sector, the government in July started a campaign offering discounts for domestic travel that is set to last until January next year.