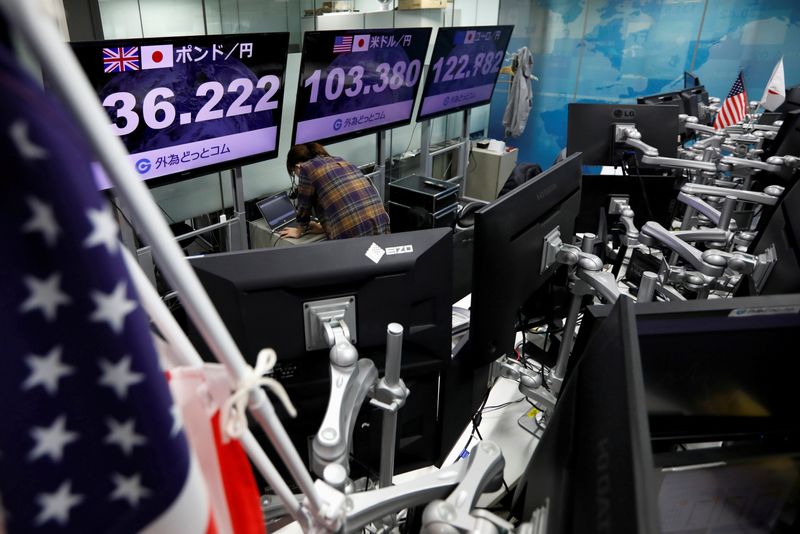 © Reuters. FILE PHOTO: An employee of the foreign exchange trading company works in front of monitors showing the Japanese yen exchange rate against foreign currencies at a dealing room in Tokyo

TOKYO (Reuters) – Having burnished its traditional image as a global safe haven during the coronavirus pandemic, Japan’s yen is attracting fresh interest as the highest yielder among the three major currencies.

The past few weeks have seen the yen hit multi-month highs as news broke of a Biden presidency and a possible COVID-19 vaccine, which is at odds with its tendency to weaken when investors seek risk and growth prospects.

Analysts cite two big reasons driving a wave of money into yen markets. As a net creditor nation in a world of fiscal profligacy, the yen has retained some of its safe-haven credentials.

In addition, as interest rates in Europe and the United States plunge, Japanese government bonds (JGBs) offer comparatively higher returns, in particular, on an inflation-adjusted basis.

“Investing in the U.S., outside of the equity market, is less attractive than what they can engineer in the JGB market,” said Chris Weston, head of research at brokerage Pepperstone in Melbourne.

The change in the yen’s fortunes was brought about by the U.S. Federal Reserve’s sharp monetary easing, which wiped out returns in dollar-based assets. Japanese investors lost their big appetite for overseas investments as domestic yields became higher than those available abroad.

“The Fed has changed the dynamics,” Weston said.

Following the COVID-19 outbreak, the U.S. Federal Reserve slashed interest rates to near zero. U.S. long-term yields () have fallen below 1%, compared to 2-3% prior to 2019.

Investors who hedge for currency risk have no yield advantage buying U.S. Treasuries over JGBs, whose 10-year nominal yields are stuck around the BOJ’s zero percent policy target.

U.S. yields are even more unattractive, if adjusted for inflation expectations, with real yields () down sharply at minus 0.83%. In contrast, Japanese real yields

Goldman sees the yen rising to 100 in the next 12 months.

Japanese investments in foreign bonds have already slowed, with the country’s biggest pension fund GPIF, by far the biggest buyer of overseas bonds, thought to have limited leeway to boost foreign bonds, given its allocation is close to its targets.

Analysts at JPMorgan (NYSE:) say their model suggests Japanese portfolio allocations to overseas assets will slow further through year-end and into 2021, helping to support the yen over time.

In addition, corporate Japan has cut back on a foreign acquisitions binge due to the COVID-19 pandemic. Foreign direct investments during the first three quarters of this year were down 30% from a year earlier.

Whether Japanese outflows will resume depends on the extent of the U.S. recovery after the pandemic and whether the U.S. turns into a low-inflation, low-growth economy like Japan’s, said Masayuki Murata, general manager of balanced portfolio investment at Sumitomo Life Insurance. “I think it will take a few years to make that call,” he said.