What a week—Election Day, Fed Day, and now Payrolls Day.

But as turned into Election Week without a clear presidential winner, the stock market has been rallying on the idea that a divided Congress could mean fewer restrictions on companies than if a “blue wave” had materialized.

Plus, with coming and going without any huge fireworks or fanfare, and with the central bank reiterating its commitment to its loose money policy, that leaves today—, which may or may not also bring some certainty on the election outcome.

After the market rose substantially this week, investors started out the morning looking to take a breather, and perhaps take some risk off the table ahead of the weekend by booking some profits. But with the payroll data coming in above expectations, markets shifted from solid red to mixed by the open.

While investors were still watching for the election count to be finalized in a few states that would determine who occupies the Oval Office over the next four years, they also turned their attention to the closely watched jobs report, which shed light on an economy that still remains challenged by the ongoing pandemic.

The government’s non-farm payrolls report showed more jobs were added in October than had been forecast. The nation added 638,000 jobs in October, handily beating the 570,000 expected in a Briefing.com consensus. There was good news on the unemployment front too, with the unemployment rate coming in at 6.9% rather than the 7.7% that had been expected.

Still, the number of jobs added in October was less than an upwardly revised 672,000 from the prior month. And while that upward revision is a welcome sign, it seems disappointing that job growth moderated.

Looking for bright spots in the report? One would be the “notable job gains” in leisure and hospitality, professional and business services, retail trade, and construction. These segments were among the hardest hit by the COVID-19 lockdowns earlier in the year, so this could mark another step toward normalcy.

It’s fair to note, however, that these gains are in danger of reversing should the U.S. shift into reverse on reopening. That’s what’s been happening throughout Europe, and the case counts here have been rising steadily.

The Fed Report: We’ve Seen This Movie Before

You know it’s a big news day for the financial markets when a Federal Reserve rate decision isn’t the thing people are devoting most of their attention to.

Investors continued to pay close attention to the political news as Joe Biden moved closer to gaining the electoral votes needed to win the presidency but the race remained too close to call. That uncertainty again didn’t stop market participants from piling into equities to continue the election-week rally.

Thursday’s trade was basically the same story as Wednesday’s, but there may also have been some FOMO trading as investors might have had a fear of missing out as Wall Street’s rally continued to be powered by the “gridlock trade.”

Investors appeared pleased that it was looking as if the Senate would remain in Republican hands and the House under Democratic control. A Republican Senate, according to the predominant thinking on Wall Street, would probably not pass sweeping changes involving corporate taxes, healthcare, or regulation for big tech-related firms.

It seems that market participants think the continuation of the status quo is a good thing for the market, which has been helped by stimulus from the Fed, stay-at-home stocks such as Peloton (NASDAQ:) and Netflix (NASDAQ:), and investors bidding up mega-cap tech-related stocks.

Information Technology was one of the Index’s best-performing sectors Thursday, and the tech heavy handily outperformed the other two main U.S. indices.

There Was a Fed Meeting Yesterday?

Since Congress and the White House haven’t found a way to generate any new fiscal stimulus, the Fed has pressed the accelerator to the floor with monetary measures, including its bond-buying program and a program to help small businesses. The Fed also began buying corporate-bond exchange-traded funds as well as debt from individual companies.

Fed Chairman Jerome on Thursday said the pace of asset purchases was appropriate but that discussion has been had among voting committee members about more accommodation if needed. And Powell again called on Congress and the White House to provide further economic support.

Almost lost amid the election drama, the Fed left rates unchanged at its meeting Thursday, and the decision was unanimous.

The Fed’s pledge to keep rates at levels near zero for years has really thrown a wet blanket on the drama these meetings used to generate. And this Fed gathering didn’t even include any long-term rate projections, something we’ll get next month.

While the Fed was overshadowed by all the election drama, it still delivered what bullish traders arguably want: A hands-off approach to monetary policy.

This continued Fed commitment to a “free money” policy supports equities, and “no news is good news” as far as the Fed not changing its tone. 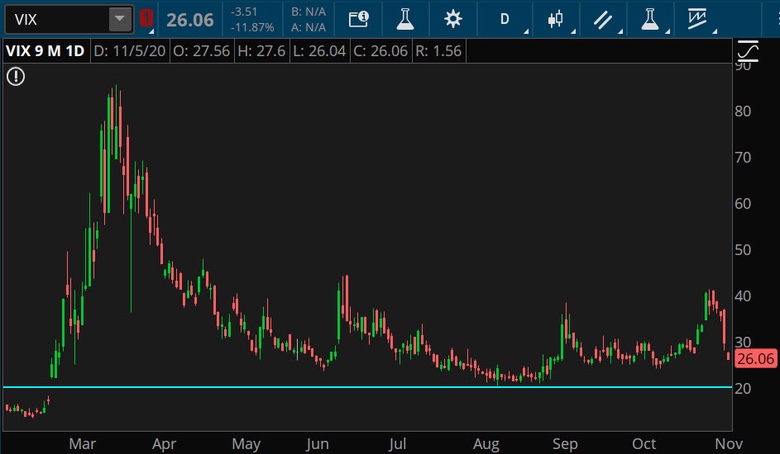 The (SOX—candlestick) gapped higher Thursday and hit a record high. The index was led higher by Qualcomm (NASDAQ:), which gained more than 12% after reporting and revenue that came in ahead of expectations. Investors also appeared pleased by the chipmaker’s current-quarter forecast amid the rollout of 5G phones.

Market participants were also piling into chipmakers amid a wider trade that favored tech companies as some of the best performing stocks on Thursday. For reference, you can see the S&P 500 Index shown here as a purple line.

Although this morning’s jobs numbers paint an important picture of the pace of the economic recovery, they’re still backward looking. That’s one of the reasons the weekly unemployment claims data—once a bit of a sleepy kind of report—has taken a spotlight during the coronavirus economic downturn. It helps us keep our finger on the pulse of the economic recovery in a way the bigger jobs report doesn’t. If there’s one word that sums up the level of unemployment claims it’s “unprecedented.” But if recent trends continue, that word may no longer apply. The latest initial claims data, for the week ending Oct. 31, showed new claims at 751,000. That’s still a very high number historically, but it’s approaching the pre-pandemic all-time high of 695,000 from 1982. With this many people out of work, it’s clear that the economic recovery has a long way to go. But once the number drops below the 695,000 mark, at least we won’t be in uncharted waters anymore.

Shares of Caterpillar (NYSE:) and United Rentals (NYSE:)—a company that rents out equipment that could fill the pages of a kids’ picture book, including bulldozers, mining excavators, tower cranes, graders, and dump trucks—both surged early this week and then ran into a wall. These two stocks that often serve as barometers of industrial demand seem to be getting their mojo back. Both finished Thursday more than 5% higher. Before all the drama this week, CAT and URI shares had recently returned to highs last reached in 2018. Both conceivably got a lift from recent data, including ISM manufacturing, which showed new orders at levels last seen in January 2004. Strength in China’s economy also could be helping CAT and URI.

The stock market is forward looking. So even though we’re still in the third quarter earnings season, it probably doesn’t hurt to look into what earnings might be like for the current quarter. Analysts certainly are. Fourth quarter earnings growth estimates have substantially improved, with estimates as of Thursday calling for -11.6% compared with -14.4% in July, according to Zacks Investment Research. “It is reasonable to expect this trend of improving earnings estimates to continue as we go through the rest of the Q3 reporting cycle,” a Zacks research note said. “The worry is that the improving trend will level off or even reverse in the face of surging infection rates that (weigh) down the economy’s recovery.”