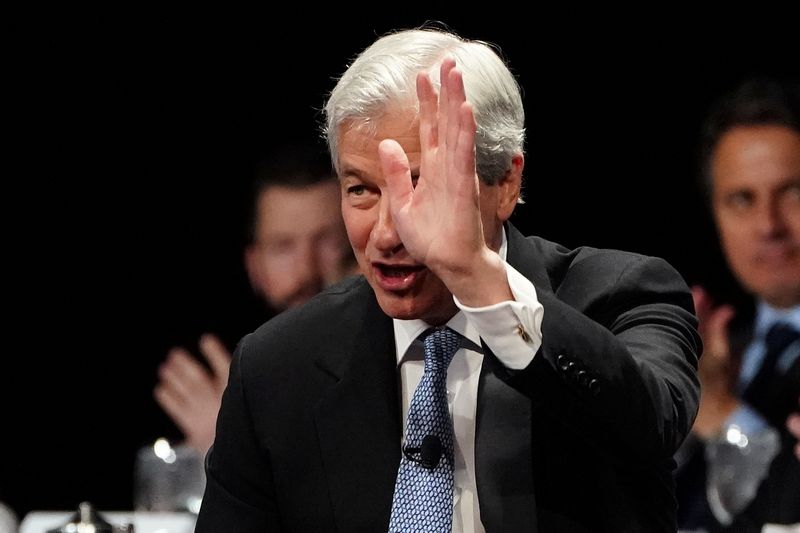 © Reuters. Jamie Dimon, CEO of JPMorgan Chase speaks to the Economic Club of New York in the Manhattan borough of New York City

NEW YORK (Reuters) – U.S. politicians are behaving like children by not passing a new stimulus bill that could help Americans whose income has been wiped out by the coronavirus pandemic, JPMorgan Chase & Co (NYSE:) Chief Executive Jamie Dimon said on Wednesday at a New York Times conference.

“This is childish behavior on the part of our politicians,” Dimon said about an impasse between Democrats and Republicans over how much additional spending should be authorized.

The two parties should split the difference between the amounts they want to devote to coronavirus relief, he said.

“Just get it done,” he said, declining to blame one side over the other.

The issue came up again in Congress on Wednesday, as U.S. Senate Democratic leader Chuck Schumer said he and House of Representatives Speaker Nancy Pelosi had formally invited Senate Majority Leader Mitch McConnell and other Senate Republicans to bipartisan talks on relief legislation.

Earlier in the day, McConnell said Congress should aim for agreement on items where there is little disagreement. But he blamed Democrats for blocking earlier Senate Republican efforts to approve spending packages of $500 billion, which Democrats have called inadequate.

Dimon also advocated higher taxes to pay for stimulus spending, but said hikes have to be done in a way that does not harm economic growth.

“Taxing my income a little bit more, that does not hurt growth,” he said. “Taxing capital formation, over time, hurts growth. We should have a competitive international tax system for business.”