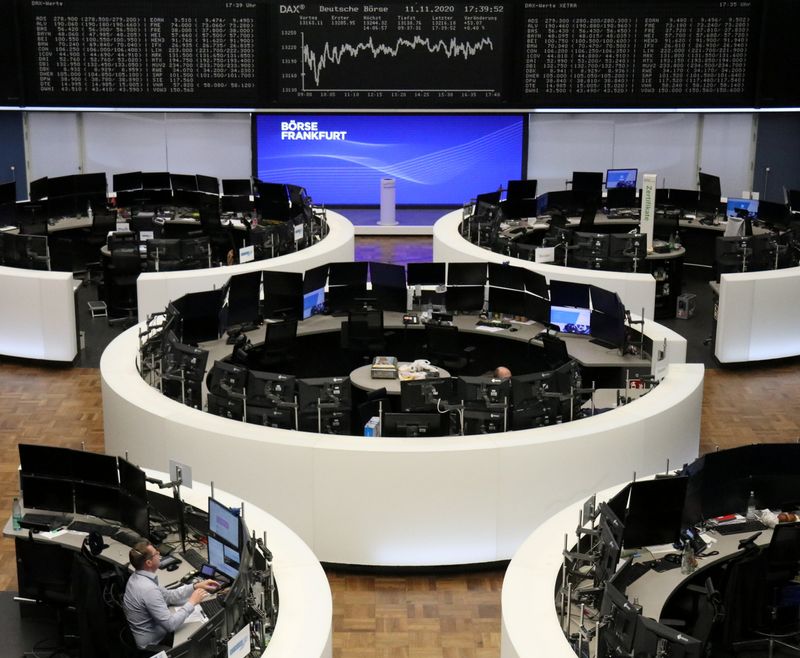 (Reuters) – European shares edged lower on Friday as surging coronavirus cases compounded fears of the damage to the bloc’s economy in the coming winter months, although the benchmark index was still on track for its second straight week of gains.

The pan-European STOXX 600 () was down 0.3% after jumping earlier this week on optimism around a working COVID-19 vaccine. The index has gained about 12% in the past two weeks, also buoyed by hopes of calmer global trade under U.S. President-elect Joe Biden.

“For all the optimism about a successful vaccine, the reality is that a possible candidate was never likely to be able to stop what is currently playing out across Europe in terms of a sharp rise in coronavirus infections and hospitalisations,” said Michael Hewson, a market analyst at CMC Markets UK.

German Health Minister Jens Spahn said it was too early to say whether restrictions imposed last week would need to be extended beyond November, while French Prime Minister Jean Castex said there would be no easing for at least two weeks.

German shares () dropped 0.2%, while France’s CAC 40 index () was flat after having risen to an eight-month high earlier this week.

Despite rallying more than 40% since a coronavirus-driven crash in March, the STOXX 600 is down about 7% this year on concerns that the second round of lockdowns would threaten a nascent economic recovery. The U.S. S&P 500, in contrast, has risen 9.5% so far in 2020.

With the euro zone likely heading back into recession this quarter, the European Central Bank has already said it would provide more stimulus in December.

European travel stocks (), which have lost 25% of their value so far this year, were down 0.4% in morning trading.

Technology stocks (), which have tracked a surge in their U.S. peers as investors gravitate toward sectors that have seen higher demand in this year’s stay-at-home environment, jumped 0.4%.

Overall, quarterly results for STOXX 600 companies have been better than expected, with 68% of the firms that have reported results so far beating analysts’ earnings estimates, according to Refinitiv data.