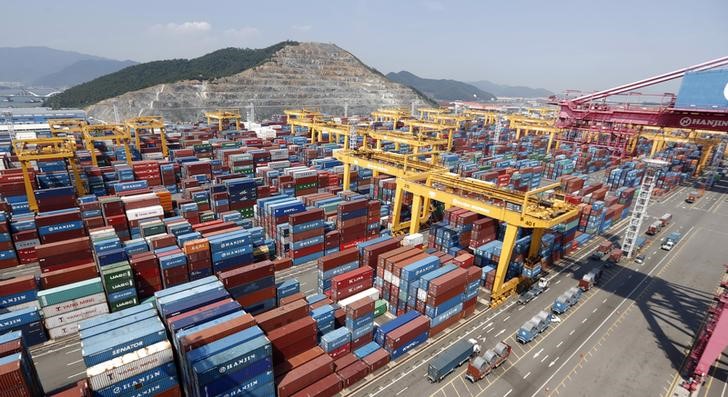 Exports fell 5.8% in the first 20 days of the month from a year earlier, according to customs office data released Wednesday. the value of average daily shipments still rose 5.9%, as the period had 1.5 fewer business days compared with last year.

South Korea’s trade data serve as a barometer of global demand. The rise in daily shipments suggests overseas demand is slowly picking up as countries adapt to life with the coronavirus.

South Korea’s memory chips have been among the biggest beneficiaries from the pandemic-driven increase in remote work and schooling arrangements. The country’s exports are also expected to get a boost from a broadening economic recovery in China, its biggest trade partner.

“The rise in Korea’s main products such as semiconductors should help keep the overall exports on the rise,” said Lee Jae-sun, an analyst at Hana Financial Investment Co. “Given China’s speedier recovery than other countries, Korea should see its exports of intermediate goods gradually increasing.”

South Korea’s semiconductor shipments increased 12% during Oct. 1-20, despite the smaller number of working days, while exports to China fell 4.6%.

Exports to the U.S. declined 2.3%, while shipments to the European Union rose 14% and those to Japan dropped 17%. Overseas shipments of cars fell 7.6%, while oil products decreased 42%. Sales of computer devices rose 11%.

South Korea’s overall imports fell 2.8% in the first 20 days of the month.

Facebook
Twitter
Pinterest
WhatsApp
Previous articleAre you up for a friendly credit score competition? By Reuters
Next articleAsian Stocks Up, to See “Mixed Day” Over Cautious Stimulus Hopes By Investing.com