Lifted by U.S., Mexico economy rebounds 12% in third quarter from coronavirus By Reuters 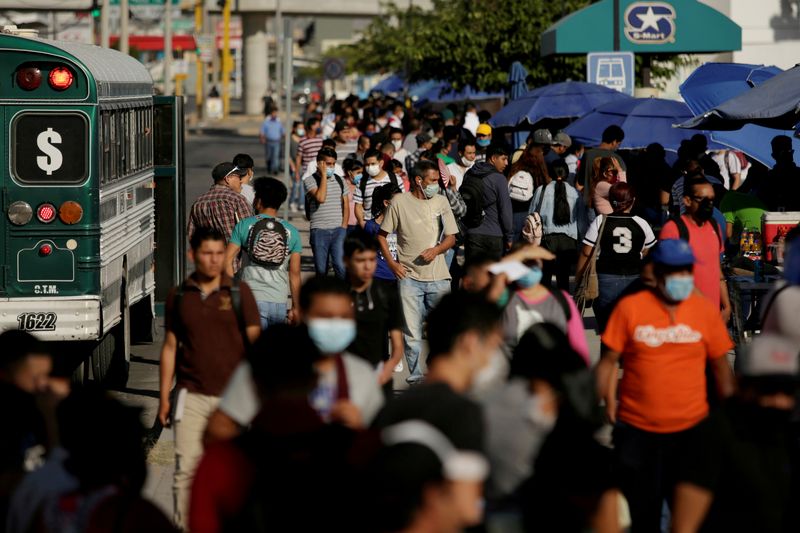 MEXICO CITY (Reuters) – Mexico’s economy grew 12.0% during the third quarter, largely as expected, making up for much of the record contraction over the previous three months at the height of the coronavirus lockdown, preliminary data showed on Friday.

The seasonally-adjusted jump in gross domestic product (GDP) published by national statistics agency INEGI was fractionally better than the 11.9% expansion predicted by a Reuters poll.

The quarter-on-quarter increase was easily the biggest since current records began at the start of the 1980s, and benefited from massive stimulus spending in the United States.

U.S. demand helped Mexico rack up large trade surpluses during the past four months, as exports picked up speed, especially in the automotive industry. By contrast, domestic demand has lagged, with many businesses still struggling.

Alfredo Coutino, an economist at Moody’s (NYSE:) Analytics, said Mexico was still heavily reliant on the U.S. economy, and forecast the recovery would slow in the months ahead.

“The Mexican economy is benefiting from the upturn in the U.S. business cycle, mainly through the U.S. demand for Mexican exports and remittances sent by Mexican migrants working in the U.S.,” Coutino said in a research note.

Between April and June, at the peak of Mexico’s pandemic lockdown, the economy shrank 17.1% from the first quarter.

Mexico has not recovered as quickly as the U.S. economy, which shrank by an annualized rate of 31.4% in the second quarter then jumped by 33.1% in the July-September period.

Despite the economic chaos of the pandemic, remittances to Mexico have surged this year, and President Andres Manuel Lopez Obrador has forecast they will reach a record $40 billion.

During a regular news conference, Lopez Obrador hailed the GDP figures as evidence the economy was bouncing back.

A breakdown of the data showed primary activities like farming, forestry and fishing advanced by 7.4% compared with the previous quarter. Secondary activities such as manufacturing increased by 22.0%, INEGI said. Meanwhile tertiary activities, which encompass consumer spending and services, climbed 8.6%.

Lopez Obrador was eager to point out that the primary sector, which he has pushed with schemes to boost farming and tree planting, is doing better now than it was a year ago.

Mexico’s economy is forecast to shrink almost 10% in 2020, its deepest annual contraction since the Great Depression.

However, primary activities, which make up only a small part of the economy, were up 2.7% in the first nine months of this year compared with the same period in 2019, INEGI said.

The severest months for the Mexican economy were April and May, when much of business activity ground to a halt, leading to the loss of roughly one million formal jobs. By Oct. 28, more than 400,000 jobs had been recovered, Lopez Obrador said.

Compared with the same period last year, Latin America’s no. 2 economy shrank by 8.6% in unadjusted terms in the third quarter, just less than the Reuters forecast of 8.7%.

Final third quarter data is due to be published on Nov. 26.