Lira Heads for Biggest Monthly Decline This Year By Bloomberg 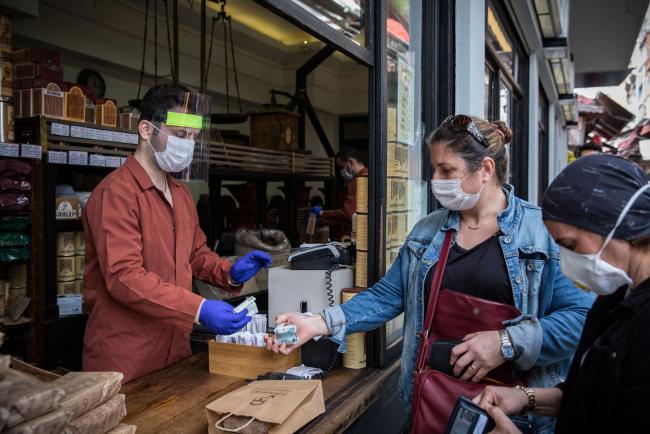 © Bloomberg. Local residents use banknotes to pay for coffee at a cafe in the Eminonu district of Istanbul, Turkey, on Thursday, May 14, 2020. The global demand shock that followed the coronavirus pandemic is exposing a key vulnerability for Turkey’s external finances, with stimulus at home worsening an imbalance between imports and exports while creating another pressure point for the lira.

(Bloomberg) — The Turkish extended losses to a fifth day, set for its worst month this year, as traders speculated official efforts to shore up the currency aren’t sufficient.

Disappointment that the central bank didn’t enact an interest-rate increase last Thursday has sent the lira to record lows every day this week. Rising Covid-19 infections, uncertainty over the U.S. election and stimulus, and mounting tensions with Europe have merely added to the negative backdrop.

‘Pain Threshold’ Nears for Lira as Erdogan Dials Up Rhetoric

With the currency in freefall, central bank Governor Murat Uysal revised up inflation forecasts during a presentation in Istanbul Wednesday. Inflation will end the year at 12.1%, up from a previous prediction of 8.9%. The country will still post positive growth this year, he said.

The lira is “extremely undervalued,” Uysal said. The country will still post positive growth this year, he said.

“There is no reason why the lira could not overshoot to a level such as 9.00 per dollar in coming weeks,” Tatha Ghose, a senior economist at Commerzbank AG (OTC:) in London, wrote in a report. “While rate hikes by the central bank would no longer act as a credible long-term policy response, we get the sense that a large emergency rate hike might be the only policy response we see in an attempt to break the momentum.”

Though the central bank unexpectedly held back from raising its one-week repo rate last week, it widened the interest-rate corridor to give itself more flexibility in increasing the weighted average cost of funding. State-run lenders have also sold more than $1 billion to support the currency so far this week, according to two people with knowledge of the matter who asked not to be identified because the details aren’t public.

In a conference call with foreign investors on Tuesday, Turkey’s Treasury and Finance Minister Berat Albayrak said multinational companies have already begun diverting production to Turkey, which he said is at a “turning point.” He ruled out capital controls.

“The new economic model proved itself by raising exports to the pre-pandemic level through production, investment, job opportunities and a competitive exchange rate,” state news agency Anadolu cited him as saying.

(An earlier version of the story corrected the location of Uysal’s presentation in the third paragraph.)