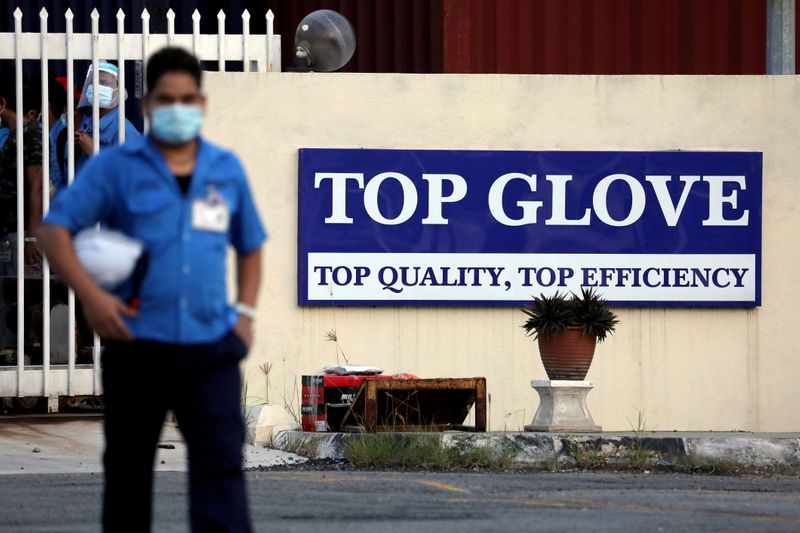 By Liz Lee and Scott Murdoch

KUALA LUMPUR (Reuters) -Malaysia’s Top Glove Corp Bhd said on Friday it will renew its listing application to push ahead with its plans to raise $1 billion in Hong Kong despite a 48% slide in its quarterly earnings.

The world’s largest medical glove maker has been seeking a dual primary listing on the Hong Kong Stock Exchange since last year, but the deal was put on hold after it was slapped with an import ban from U.S. authorities. It already has a primary listing in Malaysia and a secondary listing in Singapore.

The year-long ban was imposed on Top Glove for alleged forced labour abuses and was lifted last week https://www.reuters.com/business/malaysias-top-glove-says-cleared-resume-business-with-us-2021-09-10. It stalled the company’s listing https://www.reuters.com/world/asia-pacific/top-gloves-1-bln-hong-kong-listing-delayed-amid-us-ban-imbroglio-sources-2021-06-01 plans and hurt sales, particularly to the United States, which normally accounts for 15% of the group’s total sales.

The ban has hit Top Glove’s reputation just as it was making record profits on increased demand for its gloves during the COVID-19 pandemic.

Last year, Citigroup Inc (NYSE:) and UBS Group AG (SIX:) opted not to sponsor the deal on concerns of reputational risk. China International Capital Corp is currently the sole sponsor of the deal.

A source with direct knowledge of the matter said the ban removal was important and the deal would now be able to be marketed more broadly for a wider set of investors.

The source could not be identified as the information had not been made public.

Top Glove is aiming to raise $1 billion in the Hong Kong listing and will likely appoint more bankers in the future, the source said, adding it was set on completing the IPO as soon as possible.

Top Glove did not address questions about the listing during a briefing on the quarterly results, which showed a 48% drop in the company’s fourth-quarter earnings.

“(The) results were softer on the back of normalising demand following (a) mass vaccine rollout, leading to lower sales volume and (prices), which were not matched by a corresponding reduction in raw material prices,” the manufacturer said in a statement.

Sales to the United States fell to 4% of group sales in the quarter but were seen “fully normalising” after the ban lift, the company said.