Investors’ appetite softened during the Asian session, as optimism surrounding a potential coronavirus vaccine has faded. They may have adopted a more cautious stance on the matter as there are still many questions to be answered. In the FX world, the did not react to the UK we got early today, confirming our view that the main driver of the currency remains Brexit.

The US traded higher against all but one of the other G10 currencies on Wednesday and during the Asian session Thursday. It gained the most versus , , , , and in that order, while it was found virtually unchanged against JPY. 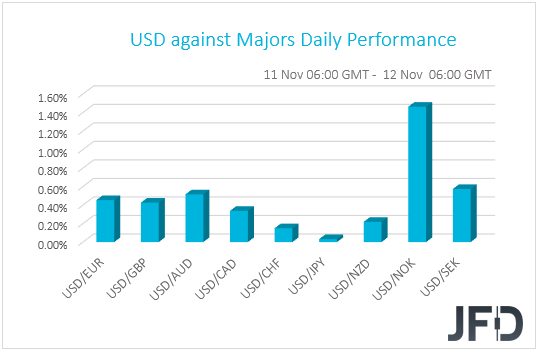 The relative strength of the US dollar and the Japanese suggests that markets turned risk-off at some point. Turning our gaze to the equity world, we see that major EU indices were a sea of green, while in the US, both the and gained 0.77% and 2.01% respectively. Only closed in the red (-0.08%). Investors’ appetite softened during the Asian session today. Although Japan’s gained 0.68%, China’s , Hong Kong’s and South Korea’s are currently down 0.11%, 0.28%, and 0.41%. 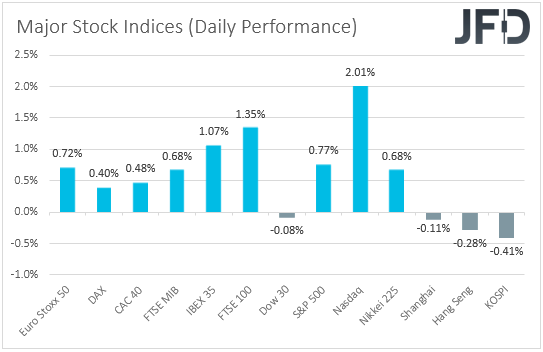 After a successful rally from the beginning of November, Nikkei 225 finally slowed down a bit, finding good resistance near the 25700 and 25900 levels. The current price structure on our 4-hour chart shows that the index is stuck in a triangle pattern. Although there is a possibility to see a further move higher, given that the prevailing trend is to the upside, still, we will take a neutral stance and wait for a violation of one of the sides of the formation.

Alternatively, if the lower side of the aforementioned triangle breaks and the price falls below the 25311 zone, marked by the current low of today on our cash index, that may raise more selling interest, potentially leading to some further declines. That’s when we will target the 25150 obstacle, a break of which might set the stage for a test of the 24831 area. That area marks the low of Nov. 10.

It seems that the driver behind the rise in EU shares was still the optimism around a potential COVID-19 vaccine. Remarks by ECB President Christine may have also helped sentiment. She said that the central bank will focus on more emergency bond purchases and cheap loans for banks when it composes its new stimulus package next month. In our view, her comments seal the deal for additional easing by the ECB in December, regardless the progress being made with regards to a potential cure of the coronavirus.

In the US, although the S&P and NASDAQ were up, we don’t believe that this was also due to vaccine optimism. On the contrary, investors may have adopted a more cautious stance on the matter as there are still many questions to be answered, like how long it will take for the drag to start being distributed, and how will this happen. After all, looking at the details, we can see that the tech sector was the one that performed the best, as market participants bought again “stay at home” stocks. Investors’ more cautious stance is also evident by the performance in Asian equities.

As for our view, we still believe that it is too early to start cheering that the covid-era is behind us, and it seems that market participants have also arrived to that conclusion. This may result in some correction or consolidation in risk-linked assets, but we don’t expect a bearish trend reversal. After all, we are now one step closer in finding the cure for the virus, which combined with Biden’s victory in the US elections, may allow investors to push risky assets back up at some point soon.

Back to the currencies, the British pound was found lower against its US counterpart this morning, although it was among the gainers on Tuesday. Today, we already got the preliminary UK for Q3, and the nation’s industrial and manufacturing production rates for September. All releases missed their estimates, but the pound did not react at all.

It seems that traders of the British currency keep their gaze locked on developments surrounding the Brexit landscape. On Tuesday, the pound rose on remarks that both the EU and the UK are willing to work things out in order to secure a trade deal, but it seems that no progress has been made this week either. Thus, the talks may roll over into next week, with speculation that officials may lose another deadline rising. The EU summit on the 19th of the month is seen as the new deadline for reaching common ground. With all that in mind, anything pointing that some sort of progress has been made may support the pound, while the opposite may be true if officials fail to narrow the differences-gap. For now, we will stay neutral with regards to the short-term outlook of the currency.

had a great run to the upside in the first half of this week, moving further away from its short-term upside support line taken from the low of Nov. 4. However, yesterday, the pair found good resistance near the 1.7350 barrier, which is also the highest point of October. For now, we will take a neutral stance and wait for a violation of one of our levels first, before examining the next short-term directional move.

If the rate is able to move higher again and this time overcome the above-mentioned 1.7350 barrier, that would confirm a forthcoming higher high, possibly inviting more bulls into the field. GBP/CAD may then drift to the 1.7440 obstacle, a break of which could clear the way for a move to the 1.7500 level. That level marks the high of Aug. 28.

On the other hand, if the rate slides back below the 1.7225 hurdle, marked by yesterday’s low, that could increase the pair’s chances of going for a larger correction lower. We will then aim for a potential move to the 1.7179 obstacle, a break of which might open the way for a test of the 1.7110 area. That area is marked by the inside swing low of November 6th. Around there, GBP/CAD may stall for a bit, as it could get supported by the aforementioned upside line.

During the European session, we get Eurozone’s for September. From the US, we have the for last week, the CPIs for October, and the on crude oil inventories for last week. Initial jobless claims are forecast to have declined to 735k from 751k. The headline CPI rate is expected to have ticked down to +1.3% yoy from +1.4%, while the core one is anticipated to have ticked up to +1.8% yoy from +1.7%. With regards to the EIA report, expectations are for a 0.913mn barrels slide following a 7.998mn tumble the week before.

As for the speakers, we have 9 on today’s agenda. From the ECB, we have President , Vice President , and Executive Board members , and . From the Fed, we have Chicago President and New York President , while from the BoE, we have Governor , BoC Deputy Governor will also speak.