Yesterday, the equity markets were all trading in the red, especially the European ones, with leading the way by losing the most, -4.17%. In the currency world, safe-havens , and took investor liking, as these were the top performers yesterday.

Market Is Feeling The Heat

Yesterday, the equity markets were all trading in the red, especially the European ones. Once again, the main culprit for that were fears of the coronavirus spreading way too quickly, which could lead to stricter lockdown measures being implemented. Some countries have already imposed strict measures, like in the south of Europe, where people are forced to obey the nightly curfews.

Certainly, that is having the biggest effect on the hospitality and travel industries, which are on a brink of a major collapse. Not to mention different suppliers and other businesses that heavily depend on those two industries. Some European indices have reached levels last seen in April and May, when the recovery had just begun. Certainly, such activity is raising fear in the market again and also the upcoming US Presidential election is also making investors cautious, forcing them to limit their exposure in riskier assets, such as stocks. 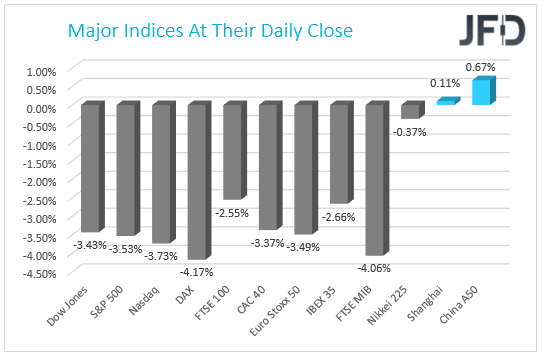 In the currency world, safe-havens USD, JPY and CHF took investor liking, as these were the top performers yesterday. The dollar index showed a decent uprise, which led to a break of a medium-term downside resistance line drawn from the high of March 23rd. The , the and the took a beating, as the market sentiment continued to stay in risk-off territory.

Given that the market is currently mainly driven by headlines, which are about the coronavirus infections, we need to see some positive news on that subject, otherwise this current bearishness might roll over into something more devastating for the economy. 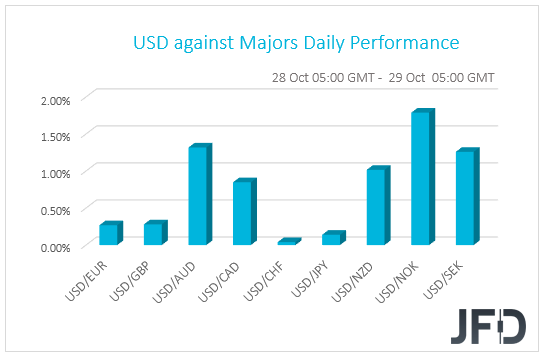 After exiting the medium-term range this week through the lower bound of it, Euro continued to slide, taking out some of its key support areas on the way. Given that the market is currently driven by coronavirus fears, unless we see some positive headlines on that subject, the downside could stay the more probable outcome, hence our bearish approach for now.

A further push south may bring the index to the 2852 hurdle, marked by the low of May 22, which might provide a temporary hold-up. If so, a small rebound could be possible, possibly lifting the price back to the 2957 barrier. If Euro Stoxx 50 remains somewhere below the lower bound of the previously-mentioned range, at 3096, that may result in another slide. The slide might bring the price back to the 2852 zone, a break of which could set the stage for a drop to the 2706 level, marked by the lowest point of May.

In order to shift our attention to some higher areas, we would like to see the price at least getting back above the lower bound of that range, at 3096. A further push above the 3145 hurdle could strengthen the upside idea and send the index to the 3217 obstacle, or even to the 3308 barrier, marked by the high of Oct. 12. If the buying doesn’t end there, the next possible target might be the upper bound of the previous range, at 3395.

Yesterday, the Bank of Canada, as it was expected, kept its interest rate unchanged, at +0.25%. The Committee said it will maintain its current forward guidance, supplemented by the QE program. Also, they have projected that 2020 will end up with a 5.5% economic contraction, but for now, they believe that the economy in 2021 and 2022 will have an average growth rate of around 4%. Policy makers also stated that they will keep the interest at the lower bound until the 2% inflation target is achieved. 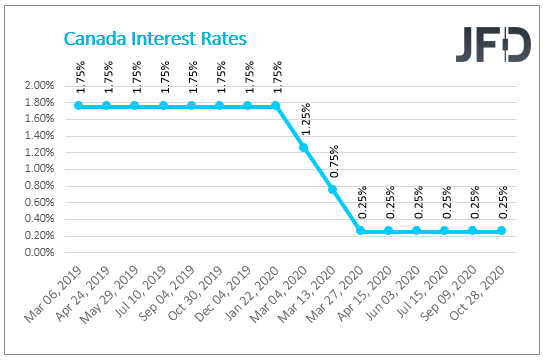 Today the economic calendar looks slightly busier, comparing it to yesterday’s. During the early hours of the Asian morning we received news from the Bank of Japan in regards to it . With a majority vote of 8 to 1, the rate remained the same, at -0.10%. In the accompanying monetary policy statement, the Bank said that they will continue purchasing the necessary amount of Japanese government bonds (JGB) without setting an upper limit, in order to keep the JGB yield at around 0%. The Bank also revised their real GDP figure for the 2020 fiscal year, which was set for a negative 5.5%. This comes inline with the BOC projection mentioned above. There was no major reaction from the Japanese yen.

The central bank torch will be passed later on to the ECB, as it will also deliver on its . During the last meeting, the Bank kept its monetary policy unchanged, but ready to adjust it as appropriate, in order to have inflation moving in the needed direction. But we doubt that the Bank will not make any hints on providing more stimulus, given the rising coronavirus problem and that many Europeans are feeling the consequences of the restrictive measures being taken by governments in the EU.

Also, judging from the previous readings of some eurozone economic indicators, additional stimulus could be needed. For example, the eurozone service sector remains in the contraction territory, below 50. Not only that, the October reading came out even below the September one, which was also below 50. The euro area business climate indicator continues to remain in negative territory. If the ECB suggests that more quantitative easing could be needed, this may prove negative for the euro.

After yesterday’s sharp decline, has managed to rebound somewhat, however it still remains below the short-term tentative downside resistance line, taken from the high of Oct. 20, and below the 123.00 level, which now may take the role of resistance. Even if the rate climbs a bit higher but struggles to overcome either the 123.00 hurdle, or that downside line, we will continue aiming lower, at least for now.

As mentioned above, we may see a small push higher, however, if that move is short-lived and the pair reverses back down again, this might lead it to yesterday’s low, at 122.19. If this time that support area is no match for the bears, its break would confirm a forthcoming lower low and could send EUR/JPY further south. That’s when we will aim for the 121.80 obstacle, or even the 121.47 level, marked near the low of July 14th.

Alternatively, if the rate moves higher, breaks the aforementioned downside line and then rises above the 123.41 barrier, marked by the inside swing low of Oct. 23, that might set the stage for further advances, as such a move may interest more buyers. If so, EUR/JPY could travel to the 124.00 obstacle, or even to the 124.23 zone, which is the high of Oct. 23. If the buying doesn’t stop there, the next potential target might be at 124.60, marked by an intraday swing low of Oct. 20.

The 1st estimate of the US for Q3 is coming out, with the forecast pointing to a 31.9% qoq SAAR rebound following a 31.4% contraction in Q2. That said, the Atlanta GDPNow model suggests a 35.3% rebound and thus, we would consider the risks surrounding the official release as tilted to the upside. Germany’s preliminary inflation data for October is also coming out, with the rate expected to have slid to -0.3% yoy from -0.2%, and the HICP one to have held steady at -0.4%.

Also, US will produce its and jobless claims figures. Currently, the expectation for both numbers is to have fallen somewhat. The initial jobless claims number is believed to have gone from 787k to 775k. The continuing jobless claims are forecasted to have dropped from 8373k to 7700k.