It’s hard to find a superlative that captures all the drama this morning.

About the only thing that could overshadow relief about getting the election behind us is this amazing vaccine news from Pfizer (NYSE:) and BioNTech (NASDAQ:). Their vaccine demonstrated more than 90% effectiveness against COVID-19, the companies said in a press release. Everyone had been hoping for 50% to 60%, so this looks like a home run when people would have been happy with a single or double.

We’re seeing a rally of immense proportions shape up in pre-market trading—no surprise when you consider that two of the three major things hanging over the market in September and October were the virus and the election. In just three days, it feels like two of those weights have a chance to come off everyone’s shoulders.

The biggest problem is COVID-19, and once it’s solved, a lot of other problems solve themselves, like people going back to work. Heading into the cold winter months, particularly in the northern states, it would be great for big and small businesses alike.

That’s not to say everything is smooth from here on. There still hasn’t been a concession from President Trump, and legal battles may play out in coming weeks. Also, additional vaccine data need to be collected. It’s not like the vaccine is out and approved. This is the first set of results, which the two companies call “initial evidence” of the vaccine’s effectiveness.

There’s also the matter of making enough doses, distributing them, and achieving U.S. Food and Drug Administration (FDA) emergency approval. The news is great, but the vaccine makers have to perform on plan.

Another rough patch is the (NDX), which actually wilted a little in pre-market trading before bouncing back as many investors sold shares of “stay-at-home” companies that were some of the biggest beneficiaries of the covid economy. It looks like it could be a rough morning for Zoom (NASDAQ:), Amazon (NASDAQ:), Netflix (NASDAQ:) and a host of others whose stocks have shined over the last eight months thanks to the shutdowns.

On the flip side, Financial stocks stormed back and so did airline and cruise ship companies. Some of those travel companies jumped 20% or more.

Over in the bond market, the 10-year yield quickly jumped 10 basis points to 0.92%, a new five-month high. Yields tend to climb when there’s hope for stronger economic growth. Volatility—already down a lot last week, stepped back a bit more. Crude rallied almost 10% to back above $40 a barrel.

It’s a pretty amazing overnight move, but remember that volume tends to be a bit thinner in the pre-dawn hours. It’s possible there could be a bit of pullback as investors trade individual stocks, but it’s hard to see things getting crushed.

The best week for stocks since April ended with a fizzle on Friday. That likely reflected some profit-taking after a phenomenal stretch that put major indices back near all-time highs.

With the election out of the way, there are still two major overhangs. Both should sound familiar and won’t come as much of a surprise: COVID-19 and stimulus. Even with today’s vaccine news, it’s likely the virus represents a continued challenge for a while to come. Just knowing there’s a vaccine out there doesn’t magically cure people or end the danger, at least not until enough of us get the vaccine to provide community resistance. That could still be months.

The divided power structure shaping up in Washington looks good for markets, which historically tend to do better under that circumstance. Hopefully, there’s a resurgence in terms of people willing to work together to get things done, and that helps the country.

It feels like there’s a better chance of some sort of stimulus or infrastructure plan injecting more government money into the economy. The market’s rally last week before the vaccine news arguably tells us that Wall Street is voting for spending, whatever form it might take or label you want to use.

A few more thoughts on Friday’s October payrolls data: Overall, there was a lot to like despite the headline number falling from September’s revised figure and representing the lowest growth in five months. Basically, we’ve enjoyed six straight months of , and seeing the leisure places lead the way in October was kind of a nice thing

If there’s anything that could throw a little cold water on the jobs picture heading forward, it seems like a number of states are approaching lockdown, so it will be very interesting to see how that plays out. Many restaurants, for instance, are going to have trouble keeping employees on payrolls as some states ban indoor dining and winter makes outdoor dining a challenge in places like Illinois. A government stimulus program that reinstates some of the protections those businesses enjoyed under the CARES act might help, but we’ll have to wait and see how the political situation gets sorted out.

On the plus side, professional business services and construction jobs growth levels in October were quite a nice surprise. To see those jobs coming back is really, really good. Also, some of the jobs that went off the map from September into October were government positions related to the census, so it’s a brighter picture actually than the headline number.

Looking ahead, volatility in the payroll numbers to come could continue to be off the charts. But construction, manufacturing and transportation and warehousing all had really nice gains in October, and those are three backbones to the economy. 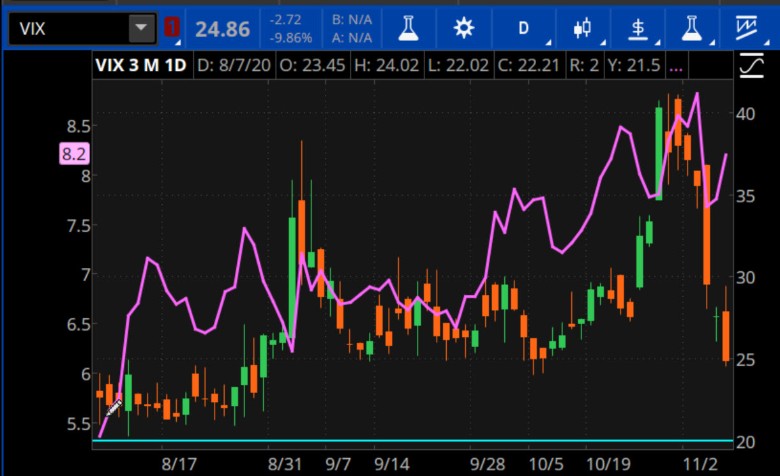 CHART OF THE DAY: TWO HORSEMEN ON THE MOVE. While many eyes focused on the rally in “big tech” last week, a couple other asset classes were on the move—two of the so-called “horsemen of risk.” The Cboe Volatility Index ( – candlestick) took a big leap toward normalcy, spending little time in the 30s before settling in below 25 to end the week (but still above the 20 mark—blue line). Meanwhile, the yield on the 10-year Treasury (TNX – purple line) flipped back above 82 basis points (0.82%)—roughly the middle of last week’s range between 75 and 90 basis points. Data source: Cboe Global Markets (NYSE:). Chart source: The thinkorswim® platform from TD Ameritrade (NASDAQ:). For illustrative purposes only. Past performance does not guarantee future results.

Not Over Yet: We’re around 80% through earnings season, and it’s generally been a strong one (though putting that in context is important due to the pandemic). Most companies are beating Wall Street’s estimates, and that, combined with the Fed’s promise of continued easy monetary policy, still underpins stocks. So do strong Q3 results so far. With S&P companies reporting, analysts project an average earnings per-share loss of 7.5% from a year earlier, according to FactSet. Remember, we entered this earnings period with FactSet projecting a 21% decline.

We’re not out of the 2020 woods, yet, though. Analysts expect a Q4 earnings decline of 11%. Once 2021 begins, especially by Q2, comparisons will become much easier for reporting companies. However, it might be hard for their stock prices to get much of a boost from that, considering how quickly prices grew compared with earnings so far this year. Before today’s huge rally, the (SPX) traded at around 21.8 times its projected earnings over the next 12 months, above a five-year average of 17.56, according to FactSet.

An Earnings Tale of Two Companies Ahead: There’s still a decent amount of reporting on the way between now and Thanksgiving, including two companies this week that could help illustrate the yin and yang of our “stay at home” economy. Homebuilder  (NYSE:) reports tomorrow and could give a ground-level view of how buyers are responding to slightly higher mortgage rates. The home-building sector roared in September, but played defense more recently as some investors appeared to think the biggest bulk of pandemic-related home buying is over. We’ll see tomorrow if DHI executives weigh in on that.

Then there’s Disney (DIS) on Thursday. The home of the mouse has its yellow slippers neatly planted in both aspects of the COVID-19 economy, suffering from lack of theme park, resort, and movie visits but possibly making up for some of that with its streaming business. The last time DIS reported, investors jacked up shares on word that DIS’s streaming platforms, including Disney+, had reached more than 100 million subscribers. But parks revenue fell 85% from a year earlier due to COVID-19. The new wave of cases worldwide and tougher travel restrictions recently imposed by countries like China could be another barrier to DIS in the coming holiday quarter, so let’s see what they say about that.

Fed Watching from the Sidelines: The Fed—in football parlance—held the clipboard but didn’t call any new plays last week, basically saying they’re going to continue doing what they’re doing but let the game play itself for a while. The Fed’s meetings are becoming increasingly uneventful and sleepy affairs, not through any fault of Chairman Jerome Powell and company but simply because the Fed, like the rest of us, couldn’t do much about the election results nor the race to a vaccine.

One thing to maybe keep in mind over the final weeks of 2020 is the impact of possible tax-related trading. While the political transition is still shaping in Washington, some investors might be jumpy about possible changes in the capital gains regime next year, making them more likely to want to take profit under the current rates. The fact that the Senate leadership might not be decided until early January creates some uncertainty.

Any word on plans for tax policy changes next year could conceivably cause pressure at times between now and Dec. 31. Watch the polls in Georgia, too, for clues about what the Senate might look like in 2021.