The final (NFP) report before the highly-anticipated late-August central banker symposium in Jackson Hole is on Friday, and the only certainty about it is that the result is highly uncertain.

As we noted in our report:

“The monthly US jobs report has been particularly volatile of late as workers remain reticent to return amidst concerns about safety and continued elevated levels of unemployment insurance. Nonetheless, traders and economists are expecting a reading in the 925K range, which would mark the strongest labor market growth in eleven months if seen.”

Meanwhile, suggest that the Fed is unlikely to outline its taper plans at Jackson Hole regardless of how Friday’s jobs report prints, but that a couple more months of strong wage and job growth (ideally accompanied by a peak in COVID cases) could be enough for the central bank to start the long process of normalizing monetary policy.

While there appears to be some disagreement within the committee, Fed Chairman Jerome Powell explicitly noted that “…we have some ground to cover on the labor market side. I think we’re some way away from having had substantial further progress toward the maximum employment goal.”

We’ll have our full NFP preview report with all the leading indicators out on Thursday, but we did get one decent harbinger from July’s report. While the headline reading came in about a point below expectations at 59.5%, the employment subcomponent did flip back into positive territory at 52.9% after hovering near flat (50%) territory for the last two months.

We’ll be tuning in eagerly to Wednesday’s , as well as Thursday’s and ISM PMI releases, as we look to handicap Friday’s key NFP report.

In the FX market, usually has the “cleanest,” most logical reaction to US data, so it makes sense to watch that pair in the lead up to and release of the NFP reading.

Technically speaking, USD/JPY has formed a “head-and-shoulders” pattern over the last two months; for the uninitiated, this pattern shows a transition from an uptrend (higher highs and higher lows) to a downtrend (lower highs and lower lows) and is often seen at significant tops in the market: 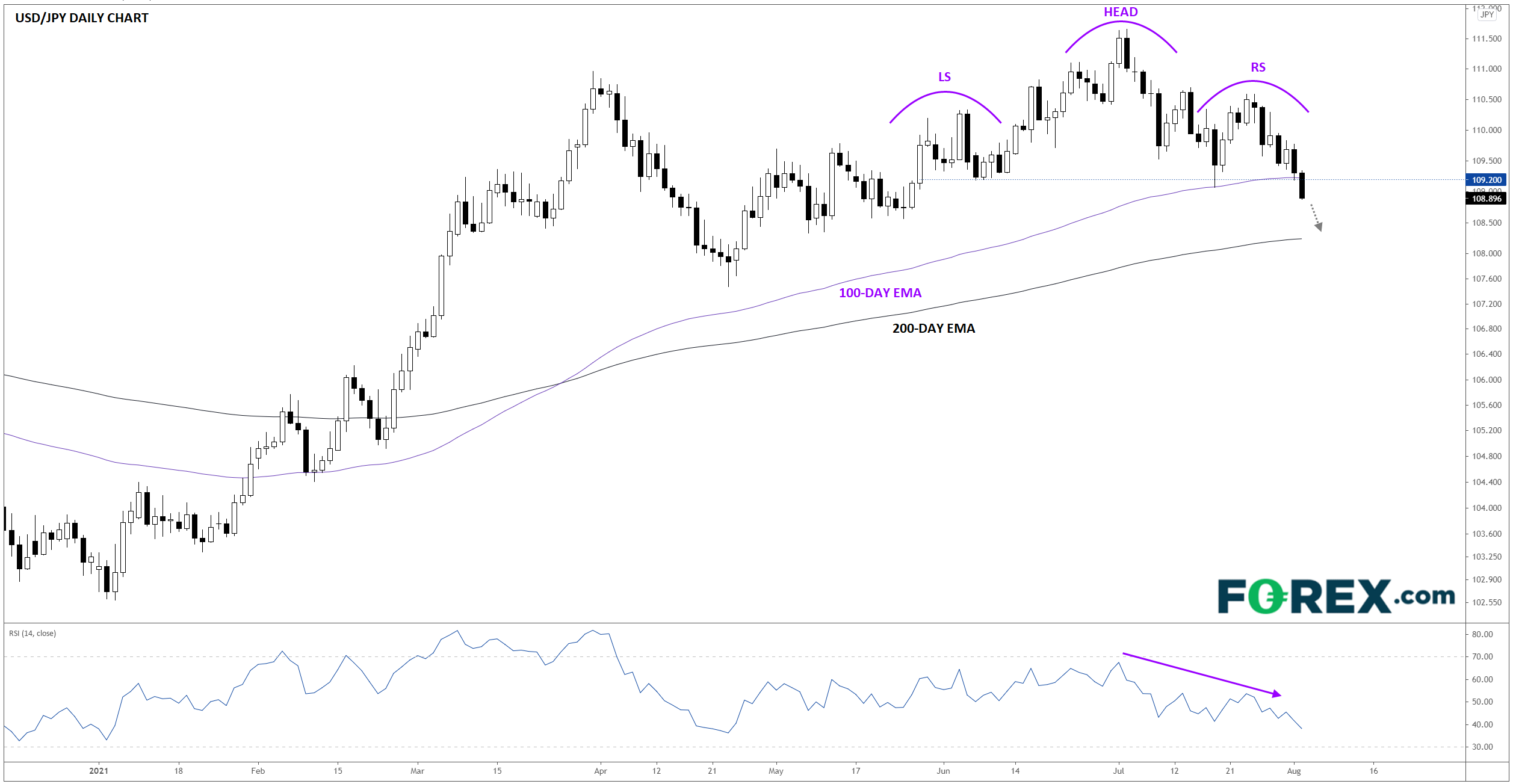 With USD/JPY breaking below the pattern’s neckline and 100-day EMA at 109.20, it’s clear that short-term bears have the upper hand. Especially if we see weak data out of the US labor market this week, USD/JPY traders may look to push rates down toward the 3-month low and 200-day EMA near 108.25 next.

Facebook
Twitter
Pinterest
WhatsApp
Previous articleDollar Down, Near Recent Lows Ahead of U.S. Economic Data By Investing.com
Next articleWhatsApp begins rolling out Snapchat-like ‘View Once’ feature for photos, videos: Everything to know