Five months ago, I introduced Nio (NYSE:) to Slope as a long idea. Since then, it has appreciated about 800%. As the intraday chart below shows, this thing is an absolute bottle rocket. 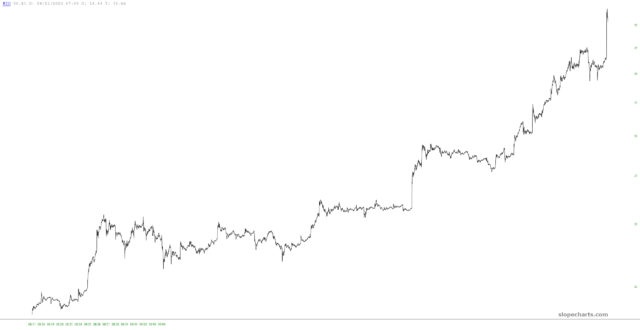 Of course, every teenager with a trading account has been going ape over it, and if you wander over to WSB, almost every single meme is about NIO, which has definitely pushed aside Tesla (NASDAQ:) and Musk as the obsession ofWSB.

I took this as a signal of the end, so I shorted the hell out of it (virtually speaking) here on Slope.

The daily chart shows what a fantastic inverted head and shoulders the chart was back when I suggested it. This, like , is one of those financial instruments which Goes Up Until It Doesn’t Anymore.