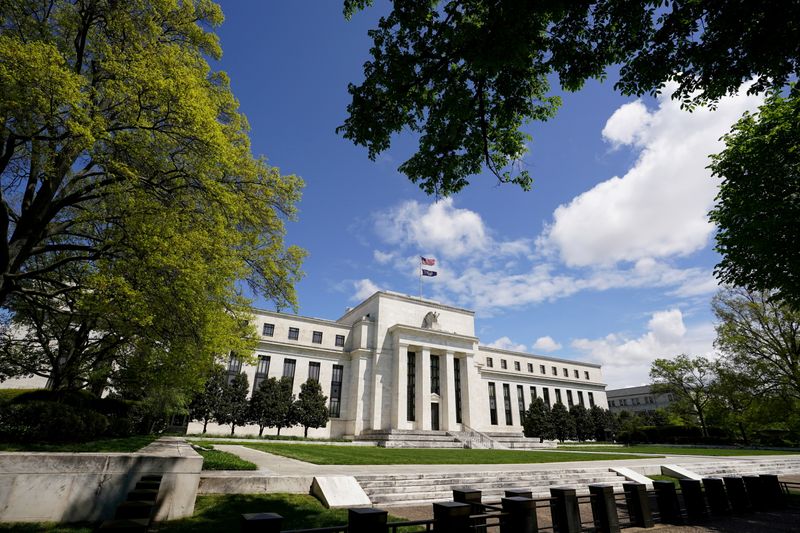 © Reuters. FILE PHOTO: The Federal Reserve building is set against a blue sky in Washington, U.S., May 1, 2020. REUTERS/Kevin Lamarque/File Photo

WASHINGTON (Reuters) – The Federal Reserve, facing a labor market that may be stalling or on the cusp of a surge, is expected next week to open the door to reducing its monthly bond purchases while tying any actual change to U.S. job growth in September and beyond.

Fed officials, including Chair Jerome Powell, have said the U.S. central bank’s $120 billion in monthly bond purchases could be scaled back later this year as a first step towards ending the crisis-era policies implemented in the spring of 2020 as the coronavirus pandemic was taking hold.

But after an unexpectedly weak gain of 235,000 jobs in August, officials will want to keep their options open, ready to reduce bond purchases as soon as the Nov. 2-3 policy meeting if employment growth rebounds and COVID-19 risks recede, but able also to delay any “taper” if the virus hinders the recovery.

“It is hard to be enthusiastic to begin reducing purchases if the pace of (job) gains has slowed a lot,” said William English, a Yale School of Management professor and former Fed official who helped shape the bond-buying program initiated by the central bank in response to the 2007-2009 financial crisis and recession.

“They will want more data,” English said. “And if it is disappointing, they conceivably end up waiting … It is a tricky statement. They want to open the door but not commit. That is the mission.”

That dilemma raises the stakes for the next U.S. employment report, which is due to be released on Oct. 8. That data is likely to show whether the Delta variant of the coronavirus is having a deeper impact than Fed officials anticipated earlier in the summer when they said the economy appeared to be divorcing itself from the pandemic.

The Fed will hold its next policy meeting on Tuesday and Wednesday, a session that will include the release of fresh economic projections and a new read on officials’ interest rate expectations. The projections will incorporate a volatile summer of data that included job gains of nearly 1 million in both June and July before the dropoff in August, unexpectedly strong inflation numbers, and a surge of COVID-19 infections and deaths that eclipsed last summer’s viral wave.

As close as Fed officials seemed to be to a bond-buying taper decision as of their late-July policy meeting, some of the subsequent data have pushed in the other direction. New York Fed President John Williams and Atlanta Fed President Raphael Bostic, both voting members of the central bank’s policy-setting Federal Open Market Committee (FOMC), are among those who want more information before making a final decision.

The Fed in December said it would not change the bond purchases until there was “substantial further progress” in reclaiming the 10 million jobs that were missing at that point because of the pandemic.

Binding policy closely to the level of pandemic job losses made sense at the time, with the country worried about a new slide into recession and COVID-19 vaccines yet to be widely distributed. It now leaves policymakers dependent on a jobs revival that has run in fits and starts, shaped by forces as disparate as childcare availability or opposition to mask-wearing mandates in large states like Florida and Texas and their effect on hiring and people’s ability to work.

As of August the economy had clawed back fewer than half of those 10 million missing jobs. Other relevant statistics, like the employment-to-population ratio, are short of what policymakers like Richmond Fed President Thomas Barkin, also a voting member of the FOMC this year, have said they want to see before concluding that the job market was repaired enough to begin reducing the bond purchases.

Some Fed officials, including Governor Christopher Waller, want to taper sooner rather than later, arguing the purchases are doing little to help hiring at this point and pose a risk if, by keeping long-term interest rates low, they fuel housing or other asset bubbles.

With inflation also higher than expected for most of the last several months, other officials have said the bond purchases should end by early next year. However, a recent weakening of inflation, as expected by many other Fed officials, may temper any sense of urgency to act faster.

That kind of division over policy, in an era when economic data have veered from frightening to ebullient, means the Fed will want to keeps its options open in the weeks ahead, said Tim Duy, chief U.S. economist at SGH Macro Advisors and an economics professor at the University of Oregon.

“They will do something like 2013. Clear the way to taper at any future meeting,” Duy said.

In 2013, the Fed introduced language at its September meeting that began a turn towards eventual reduction of its last round of “quantitative easing” after the financial crisis.

At that meeting the Fed noted the economy showed “underlying strength” despite a pullback in federal government spending. But because the impact of that “fiscal retrenchment” remained uncertain, “the Committee decided to await more evidence that progress will be sustained before adjusting the pace of its purchases.”

It repeated that language at its next meeting, before actually reducing its bond purchases in December 2013.

This time it’s the Delta variant that is posing risks.

Many economists contend that attention to the taper discussion is overblown, and that a difference of a month or two in terms of when the Fed begins or ends it makes little difference.

But it will send a potent signal that U.S. monetary policy is closing the books on the crisis, and will train focus on the next phase of debate over when inflation will require the Fed to raise its benchmark overnight interest rate – federal funds rate – from the current near-zero level.

It’s a call Fed officials want to get right.

“The macro stakes around the timing are rather low,” said David Wilcox, a former Fed research director who is now a senior fellow at the Peterson Institute for International Economics. “What is important is the inference that can be drawn about how they are reading the inflation tea leaves. How anxious are they to wrap up their bond-purchase program in a timely manner before they might want to raise the (federal funds) rate? That is why this decision is of more than passing interest.”