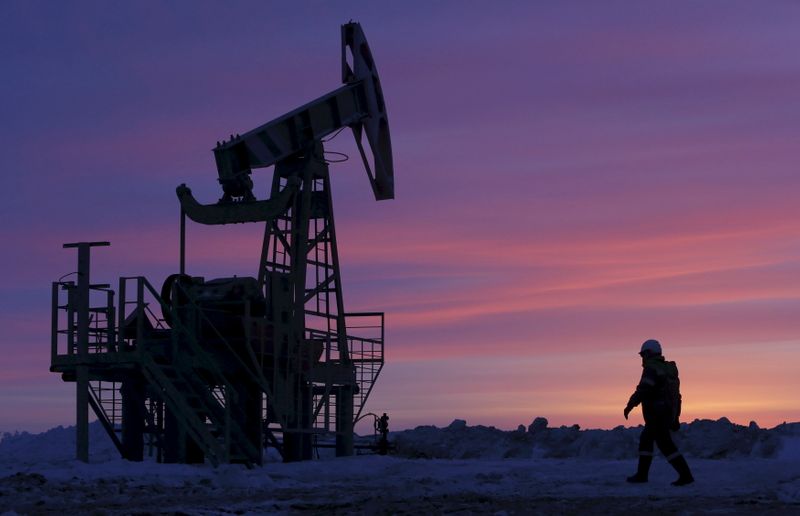 © Reuters. File photo of a worker walking past a pump jack on an oil field owned by Bashneft, Bashkortostan

By Sonali Paul and Koustav Samanta

MELBOURNE/SINGAPORE (Reuters) – Oil prices slipped on Tuesday as concerns over surging coronavirus cases around the world and political uncertainty ahead of the U.S. election offset hopes that major producers would hold back from ramping up output.

“In Asia, oil has given back some of those outsized overnight gains… However, the pullback is modest versus the scale of the rally overnight, said Jeffrey Halley, senior market analyst, Asia Pacific, at OANDA in Singapore.

“Although the technical picture suggests further gains ahead, the supply/demand picture tells a different story, particularly with Europe.”

Italy is the latest country in Europe to tighten COVID-19 restrictions, including limiting travel between the worst-hit regions and imposing a nightly curfew, which will limit fuel demand.

“Demand has hit a speed hump as the resurgence in coronavirus cases around the world has resulted in new lockdowns,” ANZ Research said in a client note.

Benchmark prices, down sharply over the past week, had a brief reprieve on Monday, rising nearly 3% after Russia’s oil minister held talks with domestic oil companies to delay crude output increases planned for January.

The Organization of the Petroleum Exporting Countries (OPEC) and allies including Russia, a grouping called OPEC+, slashed oil output from May to support prices and tapered the cut to 7.7 million barrels per day (bpd) in August. They are due to pare that further by 2 million bpd in January.

But with soaring cases of COVID-19 in Europe and the United States and the recent swift return of oil supply from Libya following an eight-month blockade, Saudi Arabia and Russia are in favour of delaying the output increase in January.

OPEC holds its next full meeting on Nov. 30.

In another bearish sign, seven analysts polled by Reuters estimated U.S. crude stocks likely rose by about 2 million barrels in the week to Oct. 30.